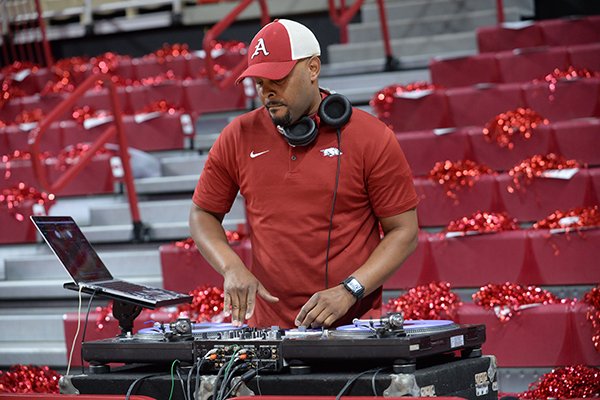 DJ Derrick performs prior to a basketball game between Arkansas and Georgia on Tuesday, Jan. 29, 2019, in Fayetteville.

Probably just as well. The Arkansas legend, as the former leader of the Hogwild Band, knew coming home wouldn’t be the same. Since 1991 an assistant professor and bands director at Louisiana Tech, his alma mater, Robken knew it wouldn’t be the same whether the Razorbacks played at Barnhill, where Robken reigned nationally renowned, or at Walton Arena, the Hogs’ hoops home since 1993-94 and resuming Oct. 20 with its floor scheduled to be finished for the Nolan Richardson Court unveiling.

What Robken did — at former Arkansas Coach Eddie Sutton’s behest — helping Barnhill Arena become the court that visitors feared to tread isn’t done at Walton, or most anywhere else. Money-hungry athletic directors in suits and their marketing directors took dictatorial charge of what they call “game management.”

Robken lamented that to sportswriter Andrew Hutchinson in Hutchinson’s article for Rivals.com leading into Saturday's game about the former Hogwild and UA Marching Band director.

Disc jockeys constantly blaring insufferably loud, mindless music before and during the games, drowning out authentic crowd noise, and at Arkansas killing spontaneous Hog calls before they start, constant commercials and presentations and marketing director orchestrated sideshows and Jumbotron “cams” dreadfully diminish the bands’ impact that Robken and others used to orchestrate so uniquely.

Through no fault of its own, Hogmild rather than Hogwild more befits the band at Walton now playing a distant second fiddle to the disc jockey and the commercials and constant promotional distractions permeating nearly all timeouts it seems.

Game management types orchestrate everything programmed on headsets now, smothering the spontaneity of a Robken playing and dashing to the band’s rally-inspiring William Tell Overture when he and Sutton saw strategically fit.

“The change has been difficult for all of us, all over the nation,” Robken told Hutchinson. “The commercials, they’ve really taken bands out of it and that’s sad. … We really did have an impact on the games. I know we did.”

Fans laughed and even referees seemed amused at the band’s antics and clever musical alterations. The Hogwild version of “All My Exes Live in Texas” as the Razorbacks were departing the otherwise all Texas-based Southwest Conference for the SEC certainly comes to mind.

Scanning pregame crowds, it seems many delay taking their seats until kickoff or tipoff just to postpone the assault on their ears.

It’s indeed “sad,” as Robken put it. Especially as from here it seems universities apparently value disc jockeys more than their own spirit groups and schools of music.