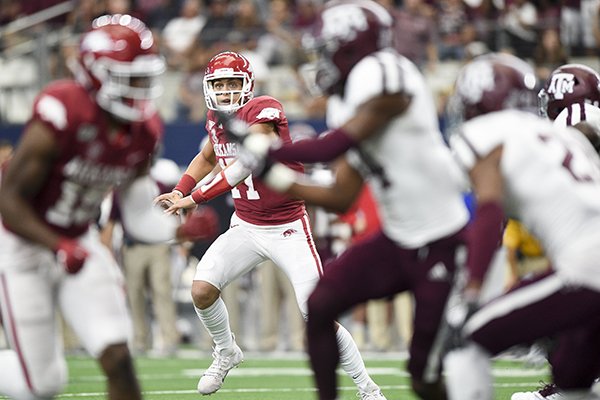 Arkansas quarterback Nick Starkel looks to pass during a game against Texas A&M on Saturday, Sept. 28, 2019, in Arlington, Texas.

FAYETTEVILLE -- University of Arkansas quarterback Nick Starkel explained the play on which he injured his left arm against Texas A&M and touted the work of Ben Hicks in that game in his first visit to the media room since the Razorbacks' lost 31-27 to the No. 23 Aggies two weeks ago.

"That's expected," Starkel said of Hicks' 15-of-27 passing for 188 yards and a touchdown against the Aggies. "He's been in this offense a long time and that's it. One guy goes down, another guy's got to step right in.

Starkel was forced out of the game with a left arm contusion after completing 12 of 17 passes for 109 yards. He was injured after a called shovel pass to Rakeem Boyd from the Aggies' 3 went awry and ended with a tipped pass and an interception by 300-pound Justin Madubuike in the end zone. Madubuike barreled through the 214-pound Starkel after an 18-yard return.

[Video not showing up above? Click here to watch » https://www.youtube.com/watch?v=_CZNTAi_8TY]

"The biggest takeaway from that play probably would be just don't throw to the other team," Starkel said. "We can talk about tackling all we want, but I shouldn't have to be making a tackle. I shouldn't be making that mistake. That's on me. That's me making a bad play worse, in my opinion."

"You practice one way the whole week always getting it," he said. "You're always getting a look, always getting guys blocked where we have Rakeem running wide open. You have a little shovel pass, and we get in the game and the guy kinda plays in between us.

[Video not showing up above? Click here to watch » https://www.youtube.com/watch?v=mGHTW4bPy_U]

Starkel, who was practicing last week during the open date, said he's gotten all his strength back in his left arm and has been feeling good at practice.

Former Arkansas receivers coach Michael Smith is in his second season handling the same position at Kentucky. Smith was a Razorbacks assistant from 2013-17 under coach Bret Bielema, and he did a good job of recruiting his native Louisiana.

"Coach Smith was there with Bielema and can fill us in a bit on personnel," Kentucky Coach Mark Stoops said. "But obviously the roster's turned over quite a bit as well."

Smith is still well liked by veterans in the Arkansas locker room.

[Video not showing up above? Click here to watch » https://www.youtube.com/watch?v=AMM_qSNEsWg]

"Me and Smitty were real close," defensive tackle McTelvin Agim said. "He was the wide receivers coach, but we were still cool. He's still my dog.

"Me and Scoota [De'Jon Harris] are close, and him and Scoota were real close, so we just got close by default."

The Razorbacks got back a chunk of players who were slowed by injuries or held out last week, including defensive tackle McTelvin Agim (knee); receivers Mike Woods (hip), Trey Knox (hip) and De'Vion Warren (concussion); tailbacks Rakeem Boyd and Chase Hayden (concussion); defensive end Zach Williams (knee); tight end Cheyenne O'Grady; and center Ty Clary (concussion), who was wearing a green, no-contact jersey and was held out of the early team periods.

Left tackle Colton Jackson (concussion) and receiver Jordan Jones, who has not played yet after undergoing surgery for a high ankle injury, were not visible during the four open periods available to the media.

[Video not showing up above? Click here to watch » https://www.youtube.com/watch?v=Tyk9-SSl92I]

Clary and walk-on receiver Peyton Ausley appeared to be the only players limited with green jerseys.

Myron Cunningham worked with the first unit at left tackle, while Shane Clenin was at center.

Defensive tackle McTelvin Agim was wearing a brace for support on his sprained right knee at Tuesday's practice while working with no limitations.

"It's a little bit [uncomfortable], but I've just got to get used to it," Agim said. "I was practicing with it last week, or this Sunday, and working out with it, so I'm basically trying to get as comfortable as I can."

[Video not showing up above? Click here to watch » https://www.youtube.com/watch?v=_-p3Mv1vjwU]

Agim suffered the injury in the second quarter of the Razorbacks' 31-27 loss to Texas A&M and played with a sleeve on the knee in the second half.

Nick Starkel went 0 for 2 directing the first unit during the offense vs. defense segment open to the media early in Tuesday's outdoor practice.

Ben Hicks threw an interception with the second unit during the period. His short crossing route pass was behind intended receiver De'Vion Warren, who tipped it up. Linebacker Grant Morgan came away with the interception.

Connor Limpert made field goals of 37 and 45 yards to end the team periods.

Cornerback Montaric Brown made his first career interception against Texas A&M. He picked off a Kellen Mond pass in the end zone and was forced out of bounds at the Arkansas 12.

"I mean, just watching a lot of Ed Reed film, it just kicked in," Brown said. "I thought I could return it, man."

Reed, a Hall of Fame defensive back for the Baltimore Ravens, returned seven of his 64 career interceptions for touchdowns.

"I just got excited, my eyes got big, first interception of my career," Brown said. "I just hope to get many more and just keep it moving, keep grinding."

Arkansas will try to break a five-game losing streak against SEC East teams when it faces Kentucky on Saturday. The Razorbacks last defeated a team from the East with a 31-10 victory over No. 11 Florida on Nov. 5, 2016.

Arkansas has lost three games to Missouri, and one game each to South Carolina and Vanderbilt since beating the Gators.

Auburn running back JaTarvious Whitlow will not be available for the Tigers for at least the next month, Coach Gus Malzahn announced Tuesday. Whitlow underwent a procedure for a knee injury he suffered late in the Tigers' 24-13 loss to Florida on Saturday. Auburn travels to Arkansas on Oct. 19 for an 11 a.m. kickoff.

Whitlow ranks second in the SEC with 544 rushing yards on a league-high 110 carries. He is expected to miss four to six weeks.

Kentucky punter Max Duffy will be the second ace in a row the Razorbacks have faced, following Texas A&M's Braden Mann. Duffy leads the country with a 51.2-yard punting average.

He was the Ray Guy Award punter of the week winner two weeks ago vs. South Carolina.

Duffy is Kentucky's all-time leader with a 46.6-yard punting average.

• Warren Stephens, the chairman, president and chief executive officer of Stephens Inc., attended Tuesday's practice and hung out in the end zone.

• The SEC Network crew assigned to Saturday's game is Tom Hart on play by play, Jordan Rodgers as analyst and Cole Cubelic as sideline reporter.