Auburn rests up for Hogs 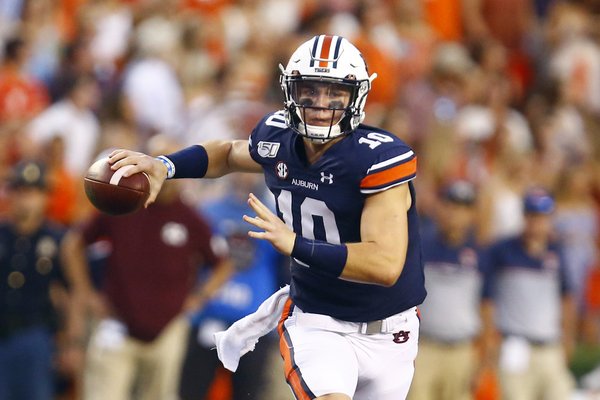 Auburn quarterback Bo Nix (10) rolls out to pass during the first half of an NCAA college football game against Mississippi State, Saturday, Sept. 28, 2019, in Auburn, Ala.

Auburn has an open date this week to recover mentally and physically from its 24-13 loss at No. 7 Florida before the Tigers resume their schedule at the University of Arkansas on Oct. 19.

"We're excited about the open date," Auburn Coach Gus Malzahn said on Wednesday's SEC coaches teleconference. "We're really using it to improve us and heal up a little bit and get ready for our next opponent and do a little work on Arkansas.

"A good off week so far. We've had really good practices."

Malzahn said the open date comes at a good time with the No. 12 Tigers (5-1) halfway through a schedule that included victories over Oregon in Arlington, Texas, when the Ducks were ranked No. 11, and at Texas A&M when the Aggies were No. 17.

"We've got six games under our belt, and really gives us a chance as coaches to re-evaluate everything and get the best plan moving forward with the second half of the season," Malzahn said. "I think you've got to look at it big picture. The fact we've played three top 20 teams away from home, I think it's good to come out of it 5-1. We learned a lot about our team."

"I think he did a good job leading us to where we're at right now," Malzahn said. "It's been a learning experience for him every game, which is to be expected for a true freshman."

Malzahn said Nix has been improving.

"This off week has been really good for him and good for us," Malzahn said. "I think every game he'll feel more and more comfortable, so that's exciting."

The open date also gives Auburn extra time to formulate a plan for its running backs after leading rusher JaTarvious Whitlow -- who has 110 carries for 544 yards and 7 touchdowns -- suffered a knee injury at Florida that is expected to sideline him four to six weeks.

Senior Kam Martin, who has rushed for 174 yards this season and 1,410 for his career, figures to start in Whitlow's place.

Other options at running back include sophomore Shaun Shivers, who has 27 carries for 174 yards this season, and freshman D.J. Williams, who has 7 carries for 32 yards. Backup quarterback Tom Gatewood, a redshirt freshman, also can bolster the running game. He has 22 carries for 122 yards.

"We're fortunate that we're deep in that running back room," Malzahn said. "Kam Martin's been around here a long time, and we've got three or four other guys that have played quality time this year."

Missouri quarterback Taylor Powell, a redshirt sophomore from Fayetteville, took every snap in the second half of the Tigers' 42-10 victory over Troy last week after senior starter Kelly Bryant sprained his left knee.

Bryant is expected to be back in the lineup against Ole Miss on Saturday, but Powell gained some valuable playing experience.

Missouri didn't score in the second half against Troy, but Tigers Coach Barry Odom said the offense purposely was geared to keep the clock running with Missouri having a 42-7 halftime lead.

"We called like three plays in the second half," Odom said after game. "So was it a fair assessment of what [Powell] can do? Not really."

Troy Coach Chip Lindsey, a former Auburn offensive coordinator, told reporters after the game he was impressed by Powell.

"I thought he did a nice job getting in there and managing the offense," Lindsey said. "He is a talented guy. I think down the road his future is bright."

Powell completed 6 of 8 passes for 57 yards.

"I'm pretty confident in myself," Powell said after the game. "I'm ready to go if Coach needs me."

"[Powell] can do everything that Kelly -- well, not everything -- can do," Nance told reporters with a laugh. "But we can run all our plays, and he can handle our offense the same."

Odom said Wednesday on the SEC coaches teleconference that Powell did a good job executing what was called.

"Taylor's always practiced and prepared like he's the starter, because he knows he's a play away from being the starter," Powell said. "He did a nice job and was efficient in the way that he ran the offense. That's kind of what we expected."

Powell has played in six games over two seasons.

"Taylor's done a nice job," Odom said. "We expect if his number's called again, he'll step in and do a great job maintaining the structure and the standard of how we want to play on offense."

Up on a roof

No one in Knoxville, Tenn., may be rooting harder for Tennessee to win at Mississippi State on Saturday than Tyler Ivens.

The co-host of a radio sports call-in show, Ivens on Monday began staying in a tent set up on the roof of a Knoxville Toyota dealership to demonstrate his confidence in the Vols, who have stated 1-4, including 0-2 in the SEC.

Ivens' radio co-host, Will West, bet him that Tennessee won't win another game. Ivens agreed to live on the roof until the Vols win again.

After playing the Bulldogs, Tennessee plays No. 1 Alabama on Oct. 19 and returns home to play South Carolina on Oct. 26 and Alabama-Birmingham on Nov. 1.

"I'm very very very confident that Tennessee can get a win between now and the month of November," Ivens told AL.com. "And, if it goes into November, guess what? Kids are coming up to the roof to get candy from me on Halloween."

There isn't a bathroom on the car dealership's roof.

"There is a bucket and a drain," Ivens said. "And I'll just leave it at that."

It might also be tough for Ivens to get a good night's sleep.

"I am literally 10 yards from the interstate, and that's not an embellishment," he said. "It sounds like I'm at Bristol or Talladega. It sounds like it is a 24-hour NASCAR race."

Several businesses have arranged to bring food to Ivens during his rooftop stay.

"In fairness, I've had more people wanting to bring me alcohol more than food," Ivens said.

The Vols finish their schedule with road games at Kentucky and Missouri, and a home finale against Vanderbilt.

Not sure if anyone has told Ivens that Tennessee is the only Power 5 conference team that hasn't beaten an FBS team this season. The Vols' lone victory is 45-0 over Tennessee-Chattanooga, an FCS team.

Arkansas is the last team to hold LSU scoreless for a quarter.

LSU beat the Razorbacks 24-17 at Fayetteville last season, but the Tigers didn't score in the fourth quarter.

Starting with the Tigers' 42-10 victory over Rice the next week, they have scored in 32 consecutive quarters -- a school record.

In those eight games, LSU is 7-1 and has outscored its opponents 427-215. The Tigers' lone loss was 74-72 at Texas A&M last season in an NCAA record-tying seven overtimes.

Missouri's Barry Odom and Ole Miss' Matt Luke will meet as head coaches for the first time Saturday, but they've known each other for more than 20 years.

Odom said they first met after the 1998 season when both were players -- Luke was an offensive lineman at Ole Miss and Odom was a linebacker at Missouri -- and they spent a week together helping at an NCAA-sponsored football clinic at the Fiesta Bowl.

Odom said neither he nor Luke could have imagined in 1998 that they'd eventually be facing each other as college head coaches.

"We both knew we were getting into coaching, but we weren't naive enough to think that we'd both be at our alma maters," Odom said. "But the coaching fraternity is really small. You never know in what circle you'll cross path again."

• Missouri senior linebacker Cale Garrett, who leads the SEC with 43 tackles and shares the lead with Florida defensive back Shawn Davis with three interceptions, tore a pectoral muscle against Troy last week. Garrett underwent surgery Tuesday and likely will miss the rest of the season.

• Georgia is the only FBS team that hasn't allowed a rushing touchdown this season.

• Tennessee linebacker Jeremy Banks was dismissed from the team this week after TMZ published a video showing him making threatening remarks to a woman who refused to let him inside her house.

• Florida running back Lamical Perine's 88-yard touchdown run against Auburn last week was the longest by a Gator since 1988 when Emmitt Smith had a 96-yarder against Mississippi State.

5;(4);Auburn;5-1;Open date before traveling to Arkansas

Alabama junior quarterback Tua Tagovailoa will look to add to his Heisman Trophy resume when the No. 1 Crimson Tide play at No. 24 Texas A&M on Saturday in the SEC's showcase game on CBS.

Tagovailoa, who finished second to Oklahoma quarterback Kyler Murray in the Heisman voting last year, has completed 113 of 148 passes for 1,718 yards and 23 touchdowns without an interception.

Florida (6-0, 3-0 SEC) isn’t getting much time to enjoy its victory over Auburn last week. After beating one top 10 team, the Gators will try to do it again when they take on LSU (5-0, 1-0) at Tiger Stadium in Baton Rouge. Florida, a 13-point underdog to the Tigers, is attempting to win back-to-back games against top 10 opponents for the first time since 2012 when the Gators won three in a row over No. 4 LSU, No. 9 South Carolina and No. 10 Florida State.

South Carolina at No. 3 Georgia

$2.6 million -- How much an apartment complex in Baton Rouge owned by Alabama Coach Nick Saban sold for recently. Saban bought the complex for $1.3 million in 2004 when he was LSU's coach.

31 for 31 -- LSU's scoring in red-zone opportunities this season, including 28 touchdowns.

76 -- Scholarship players for Tennessee, 9 under the NCAA limit.

"A gator stands no chance. Just go look at the videos on YouTube."

-- LSU quarterback Joe Burrow when asked who he would take in a matchup between a tiger and a gator with Florida visiting Tiger Stadium on Saturday.

"Any way you look at it, it's devastating, it's awful. But I also know in listening to defensive staff and watching the players [in practice], they're going to go out and try to play even better for Cale."

"I'm not very accurate right now. I've just got to settle down and take one play at a time and make sure I know what the defense is doing."

-- Auburn freshman quarterback Bo Nix after he completed 11 of 27 passes for 145 yards with 3 interceptions at Florida last week.