Believe it or not, an LSU QB could win the Heisman 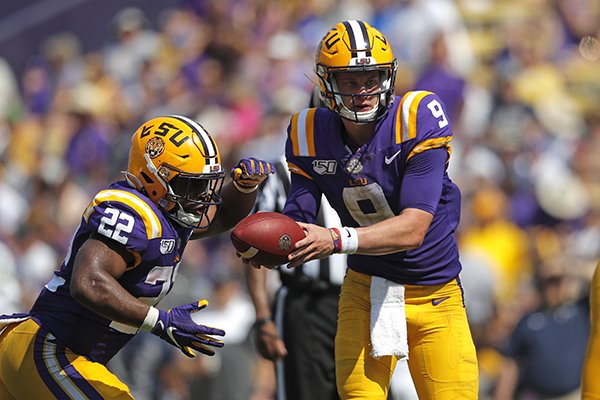 LITTLE ROCK — Based on players’ resumes and reputations of their head coaches, quarterback Joe Burrow winning the Heisman Trophy in December would be a bigger surprise than Lamar Jackson taking home the statue in 2016 when his preseason odds were 50-1.

A fringe candidate at best after 2018, odds on LSU’s Burrow capturing the trophy were available only on request in August. Six weeks later, he is the second betting choice behind Alabama’s Tua Tagovailoa.

At least, Jackson had a 12-game resume with decent numbers after his first year at Louisville while Burrow threw only 39 passes during his two years at Ohio State. He produced acceptable numbers in his first season at LSU, but nothing close to those expected from preseason Heisman favorites Trevor Lawrence of Clemson, Jalen Hurts of Oklahoma and Tagovailoa.

Plus, Jackson played for Bobby Petrino who has a knack for big pass plays, while Burrow’s head coach is Ed Orgeron, an overseer of an outdated offense where the quarterback was under center more than almost all his SEC counterparts last season.

When BetOnLine released preseason odds on 19 Heisman candidates, the list ended with Purdue wide receiver-kick returner Rondale Moore and Stanford quarterback K.J. Costello at 33-1. Anybody who had a hunch a 29-year-old lower-level coach with the New Orleans Saints was going to personally haul the LSU offense into the modern era probably could have gotten 100-1 on Burrow.

After becoming the first LSU quarterback to throw for more than 300 yards in four consecutive games and completing at least four TD passes for the fourth time in five games, his odds are 3-1.

And, kudos to Orgeron for zeroing in on Brady to rework the passing game and tutor wide receivers as soon as he knew a job would be open. Brady impressed Orgeron more than a year ago when the Saints’ staff talked offense with LSU coaches and Brady handled the run-pass option part of the seminar.

At SEC media days, Orgeron called Brady a “game changer for our staff” and the proof is in the pudding.

Even before Orgeron was hired, LSU lagged behind in the passing game, barely averaging 200 yards per game in 2013 when future NFL receivers Odell Beckham Jr. and Jarvis Landry were Tigers. Last year, LSU averaged less than 235 yards per outing. This year, they are pushing 400 yards per game and are No. 2 in the country.

Last June, Brady promised the offense would “get our speed in space” and told The Advocate in Baton Rouge that when the best players get the ball, “we’re sitting back there enjoying and watching.”

Last Saturday, leading Utah State 14-6 and facing second-and-9 at their 1, the Tigers completed passes on second and third down to begin a 99-yard drive. The foe was inferior, but aggressive and fearless is the new normal at LSU.

For instance, a month earlier on the road, the Tigers had third-and-17 while leading Texas by six points with three minutes to play. Instead of playing safe and punting, Burrow threw to Justin Jefferson who broke a tackle and went 61 yards for the TD.

It is unreasonable to expect Burrow to match his current per-game production and 78.2 completion percentage against No. 7 Florida this week, Auburn two weeks later and Alabama on Nov. 9 because all play superb defense. However, even completing two-thirds of his passes and winning two of three will likely earn Burrow a trip to New York for the Heisman presentation.

Last week, Florida stopped Auburn on 12 of 14 third downs, and harassed freshman quarterback Bo Nix into three interceptions and 11-of-27. In Baton Rouge this week, the number of SEC unbeatens will be reduced to three.

At the other end of the spectrum, Arkansas and Kentucky are among four teams still winless in the SEC.

When Terry Wilson suffered a season-ending injury early on, Sawyer Smith took over, but he was injured in Kentucky’s last game and wide receiver Lynn Bowden replaced him.

Kentucky’s depth chart shows Smith as No. 1 and sophomore Walker Wood as the backup. Wood and Bowden took the snaps last week when Smith was given time off to nurse wrist and shoulder injuries.

More than one media outlet in Kentucky has hedged about Smith, even hinting that Bowden might start. If so, the offense would appear to be limited because he was a running back in high school and has only thrown nine passes in three years.