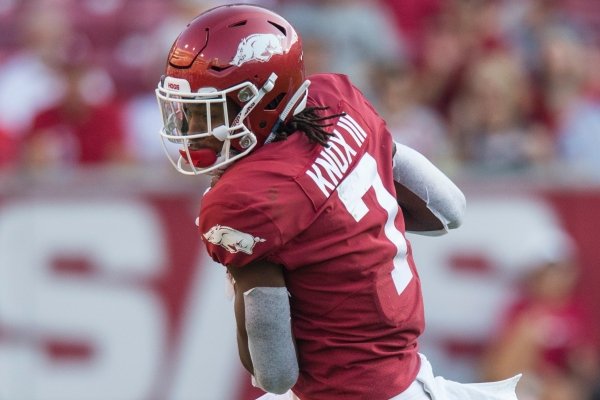 FAYETTEVILLE -- Perhaps the University of Arkansas' search for consistent offensive production can begin with trotting out the same group of skill players in the first formation at the same time.

The Razorbacks (2-3, 0-2 SEC) have been up and down on offense through five games with a quarterback shuffle, injuries at receiver and the offensive line, and tight end Cheyenne (C.J.) O'Grady's absence from the season opener.

Tailback Rakeem Boyd, the nation's No. 25 rusher with 96.6 yards per game, is the only Arkansas skill player to start all five games at the same position.

Saturday night's game at Kentucky could be different.

For the first time this season, the Razorbacks might be able to pair Nick Starkel -- who has been the starting quarterback since Week 4 -- with Boyd, O'Grady, and receivers Mike Woods, Treylon Burks and Trey Knox for the first offensive snap of the game.

"First of all, it provides great continuity across the board there when you're able to do that," second-year Arkansas Coach Chad Morris said of the potential for having the projected starting lineup all together.

Perhaps it is no coincidence the Razorbacks' strongest offensive showing came in the one game when Starkel started with Boyd and those top three receivers.

Arkansas racked up a season-high 520 yards and went 4 for 4 in the red zone in its 55-34 victory over Colorado State on Sept. 14 with those players in the starting lineup. O'Grady played the final three quarters of that game and finished with three catches for 74 yards, including a tackle-breaking, game-clinching 62-yard touchdown.

"We've really had just one game where we've had our wide receiver corps with Treylon and Trey, CJ with Nick playing a complete game together," Morris said.

Burks, who had four catches for 92 yards against Colorado State, sat out the upset loss to San Jose State the next week while in concussion protocol.

Knox, who had six catches for 90 yards and a touchdown against Colorado State, missed the Razorbacks' 31-27 loss against Texas A&M due to a lingering hip injury.

T.J. Hammonds, a running back and slot receiver, made his season debut against the Aggies after a four-game suspension, and receiver Jordan Jones, out since camp while recovering from high ankle surgery, might play in his first game of the year this week.

The whole skill gang is in position to reunite against the Wildcats with both teams coming off open dates.

"That's awesome," Starkel said. "That's huge for us, all those young guys being healthy. Getting C.J. and everybody back out there. T.J. Hammonds, I know he got to play a little bit last game at A&M.

"That has been an awesome addition. He brings some fire and energy. Obviously having Treylon and Trey back is huge, and C.J. The receiving corps, we feel great this week."

Kentucky Coach Mark Stoops noted how the full set of playmakers can make a difference for the Razorbacks.

"I see a group that is very, very talented and very explosive," Stoops said. "You see that at times. I'm sure with the continuity of everyone back they will definitely have some playmakers, and Nick is a very, very talented quarterback with a lot of experience. We're definitely going to have our hands full. They definitely present a challenge."

The Razorbacks also have endured a combined three lost games from left tackle Colton Jackson and left guard Austin Capps this season. Jackson is questionable for Saturday's game after entering concussion protocol, and center Ty Clary is expected back after missing last week while on concussion watch.

The Razorbacks' offensive numbers don't match up well with their total production. They are 29th nationally in passing with 289.8 yards per game, and 49th in total offense with 431.6 yards per game. Their average of 23.8 first downs per game is 31st in the nation, virtually on par with unbeaten and highly ranked Georgia, Clemson and Penn State.

Yet they are 72nd in scoring with 28.6 points per game, and that includes three defensive touchdowns.

Cashing in from the red zone has been a problem, with 65% conversions ranking 126th in the nation. And the Razorbacks' run game could use a jolt, as they average 141.8 yards per game to rank 85th.

Boyd got much-needed rest last week after tweaking his shoulder against Texas A&M.

"I'm feeling pretty good, like I was at the beginning of the season," Boyd said. "So I think it was good for the whole team and everybody kind of getting back together. I mean, I dinged up my shoulder a little bit, but I'll be fine."

Moving the Cats' stout defensive line could be a problem. Kentucky has a pair of nose guards in Quinton Bohannon and Marquan McCall who check in at 361 and 371 pounds, respectively, while tackle Calvin Taylor is listed at 6-9, 300 pounds and end T.J. Carter is a 6-4, 287-pounder.

Said Boyd: "Their D-line is really physical. We're going to have to pack our lunch with them. That means we've got to work on our technique this week and stay low because their D-line is pretty big."

Rejuvenating the run game would be a key for increased productivity, Starkel said.

"That's huge for us," he said. "That's how it opens up our play-action pass, opens up our drop-back passing game whenever teams start to load the box, as well as RPOs [run-pass options], when they start bringing guys in from different places to try to make tackles and fit gaps. Having that running game is huge."