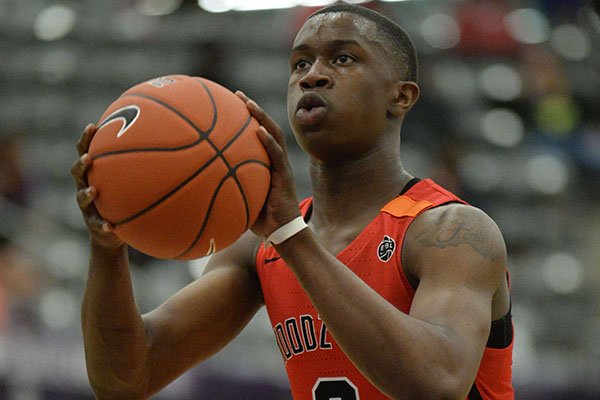 ESPN 4-star guard prospect Davonte Davis has committed to Arkansas after receiving a scholarship offer from the Razorbacks on Oct. 9.

Coach Eric Musselman and his staff were able to win Davis over quickly.

He had been committed to Oklahoma State since December, but re-opened his recruitment on Oct. 1. Davis visited Arkansas for the Red-White game last Saturday.

He described why he, Musselman and the staff were able to form a tight relationship in a short period of time.

“They’ve been upright with me,” Davis said. “That’s something that a lot of kids don't look at, and I think having that relationship with the coaches and being able to trust each other is really big.”

ESPN rates Davis the No. 18 shooting guard and the No. 79 overall prospect in the nation for the 2020 class.

Davis averaged 12 points, 4.1 rebounds and 2.4 assists in Nike EYBL regular-season play and 18.4 points and 4.8 rebounds at the prestigious Peach Jam finals in July while overcoming a lingering knee injury.

He’s eager to get to Fayetteville again.

“I’m looking forward to going on an official visit up there and seeing what’s next for me,” Davis said.

While playing for the 17-under Woodz Elite, he forged strong bonds with Arkansas targets and forwards Chris Moore, 6-6, 220, of West Memphis, and Jaylin Williams, 6-10, 220, of Fort Smith Northside.

Davis hopes Moore and Williams join him at Arkansas.

“It would be amazing,” Davis said. “We love each other on and off the court and we know how to play with each other, so playing with those two would be really exciting going on to the next level and pushing each other through thick and thin. It would help us evolve our games and try to make a big impact in the NCAA.”

He's expected to sign with the Hogs during the early signing period that runs Nov. 13-20.

Davis is the first commitment for the Razorbacks in the 2020 class.