Cowboys break through late to take scrimmage over Diamond Hogs 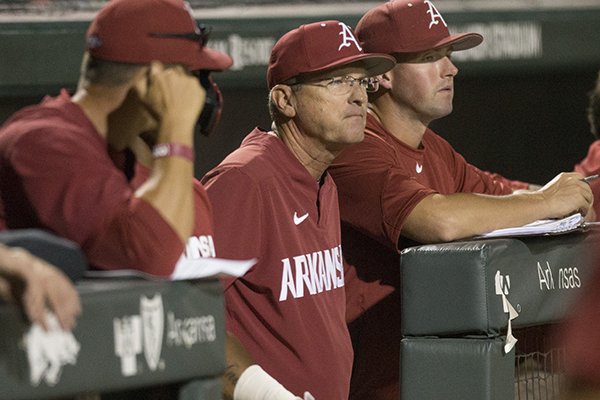 Arkansas coach Dave Van Horn watches during a scrimmage against Oklahoma on Friday, Sept. 20, 2019, in Fayetteville.

STILLWATER, Okla. — In a regularly-scheduled 14-inning scrimmage between Arkansas and Oklahoma State, neither lineup broke through until the 13th inning Saturday.

That was when the Cowboys touched up a pair of Razorback relief pitchers for five runs to pull out of a 2-2 tie and defeat Arkansas 7-2 at Allie P. Reynolds Stadium.

Oklahoma State first baseman Alix Garcia doubled off Arkansas reliever Jacob Burton to plate two runs and put the Cowboys ahead 4-2 in the 13th. Justin Campbell followed with an RBI single against Razorback freshman Blake Adams, and Adams gave up a loud 386-foot home run to Jake Thompson down the right field line to cap the Cowboys’ five-run inning.

Thompson also had a home run against Arkansas pitcher Caden Monke in the 12th inning to tie the scrimmage 2-2.

“Even though no one came into this thinking, ‘We have to win today’s scrimmage,’ you want to play well and you want to compete,” Oklahoma State coach Josh Holliday said. “I thought his first home run showed a lot of competitiveness. His second one gave us a little sense as a team that this guy isn’t afraid to swing the bat and can come through for us.”

Hitting leadoff, Franklin went 4-for-7. Kjerstad, who batted third, finished 3-for-6 and also drew a walk.

Arkansas had 12 hits, drew four walks and were a hit by pitch, but stranded 14 base runners. The Razorbacks did not have any extra-base hits.

“That’s unusual, especially on a day like today when the ball was kind of flying a little bit,” Arkansas coach Dave Van Horn said. “We hit a couple of balls hard that were caught - they caught a ball against the right field fence and a ball against the left field fence, and one to center pretty good - but we’ve hit a lot of doubles this fall.”

The Razorbacks had two strong scoring chances early in the scrimmage. Franklin and Kjerstad singled, and freshman catcher Dominic Tamez walked to load the bases with one out in the first inning, but Cole Austin hit into a double play to end the threat.

Arkansas loaded the bases with no outs in the third inning after consecutive singles by Jacob Nesbit and Franklin, and a walk by Gregory. Kjerstad struck out for the first out and Tamez grounded into a double play to end the inning.

Like three weeks ago in its first scrimmage of the fall against Oklahoma, Arkansas’ pitching was strong for most of Saturday in Stillwater. Connor Noland limited the damage to one run in the second inning when he allowed two hits and walked three batters. That run was the only one the Cowboys scored in the first 11 innings.

Thompson’s home run didn’t appear to be gone off the bat, but rode a steady wind and sailed just over the outstretched arm of left fielder Trey Harris at the wall.

“Nobody really got hit hard until the 13th inning,” Van Horn said. “We made a couple of mistakes and they made us pay for it. But for the most part I thought our pitchers did a really good job and gave us an opportunity.

“I think the pitching is deep — maybe a little deeper than it has been in the past.”

This is the second year that NCAA teams have been allowed to scrimmage against outside competition in the fall without the scrimmages counting toward their limit of regular-season games. Arkansas lost 4-3 to Oklahoma on Sept. 20. Oklahoma State is scheduled to scrimmage Vanderbilt in two weeks.

Van Horn and Holliday both praised the ability to play such a competition following Saturday’s matchup.

“I feel like we really got a lot of these two scrimmages against outside competition,” Van Horn said. “We were playing with three or four starters out of the lineup today and it gave some other guys an opportunity to get some more at-bats than they normally would have. I think that will be beneficial for us come springtime.”