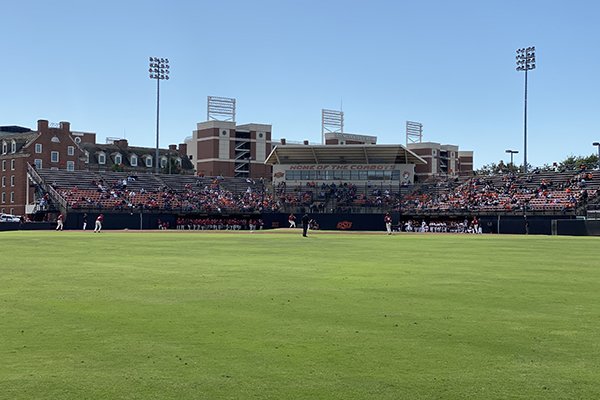 The crowd is shown during a baseball scrimmage between Arkansas and Oklahoma State on Saturday, Oct. 12, 2019, at Allie P. Reynolds Stadium in Stillwater, Okla.

It was close until the 13th when the Cowboys broke through with five runs against a couple of inexperienced Arkansas pitchers.

The Razorbacks had 12 hits, but stranded 14 base runners. We'll have more from the scrimmage a little later.

The Cowboys have broken up the scrimmage after Jake Thompson's second home run of the scrimmage, a no doubter that traveled 386 feet over the 330-foot wall in right field.

Justin Campbell, who pitched earlier and is now playing first base, also had an RBI single in the inning. Both hits came against Blake Adams, a freshman.

The Cowboys roughed up Arkansas pitcher Jacob Burton to regain the lead in the 13th. Alix Garcia's two-run double was the second double in the inning. Burton is the first Arkansas pitcher not to finish an inning today. He is being replaced with one out by Blake Adams.

Jake Thompson's one-out home run to the opposite field has tied the scrimmage. Thompson's homer came off left hander Caden Monke, who had pitched really well to that point.

Thompson, who is left handed, hit the ball well to left field. Trey Harris made a leaping attempt but it went just over his glove.

Like he did against Oklahoma, Caden Monke looked really strong in his first inning out of the bullpen here today. Monke retired all three OSU batters he faced, aided by a good defensive play by Jason Hodges at first base.

Oklahoma State stranded the bases loaded for the second time today when Max Hewitt flied out to Heston Kjerstad, who is now playing in left field.

Arkansas has made a lot of personnel changes since the intermission between the eighth and ninth innings. Jason Hodges, Cason Tollett, Nate Stevens and Trey Harris are all in the game now.

The teams took about a 20-minute break for the workers to rake the field.

When play resumed, Arkansas went down in order. Kevin Kopps pitched the bottom of the ninth inning for the Razorbacks. He allowed a two-out double to Alix Garcia, but got a groundout from Caeden Trenkle to end the inning.

A quick note: Kopps did not pitch in the first inning as I had posted a little earlier. Connor Noland pitched the first two innings for the Razorbacks.

One other note: this is a 14-inning scrimmage.

Pitching continues to dominate. Elijah Trest struck out two in the bottom of the eighth inning, his first out of the bullpen.

Bryce Osmond worked his second scoreless inning in the top of the inning. Four OSU pitchers have thrown in this game, two innings apiece.

Zebulon Vermillion pitched a strong seventh for the Razorbacks, getting a couple of fly outs before an inning-ending strikeout. Arkansas' pitching has overall been pretty strong today.

Arkansas had its first scoring chance in awhile in the top of the inning. Curtis Washington drew a one-out walk and stole second base without a throw, but Jacob Nesbit struck out and Christian Franklin flied out to strand him in scoring position.

A second straight inning ended when Dominic Tamez threw out a runner trying to steal second base. This time it was OSU's Caeden Trenkle who was caught stealing. Trenkle reached when he was hit by a pitch from Peyton Pallette with two outs.

Heston Kjerstad singled to lead off the top of the inning but never could advance past first base. Kjerstad has two of Arkansas' seven hits today.

This game is moving right along. Much like the Arkansas-Oklahoma scrimmage a few weeks ago it has been dominated by pitching, for the most part.

Kole Ramage worked around a two-out single in the bottom of the fifth inning. Dominic Tamez threw out Dylan Gardner to end the inning when Gardner was trying to steal second base.

Tamez is 1-for-3 throwing out base runners today. He has a strong arm, but his accuracy has been iffy in scrimmages this fall.

Arkansas will send the heart of its lineup to the plate in the sixth inning.

Patrick Wicklander worked around a leadoff infield single and a walk with no outs in the bottom of the inning. The runners moved into scoring position on a bunt, but Wicklander got a strikeout and a groundout to end the inning. That will likely end his day.

Arkansas had only one base runner in the top of the inning after Jesse Pierce was hit by a pitch with two outs. It was the first inning that the Razorbacks didn't have at least two hits.

Patrick Wicklander just delivered what was easily Arkansas' best inning on the mound. Wicklander struck out OSU's 2, 3 and 4 hitters, including clean-up hitter Alix Garcia with three straight takes on the outside of the plate.

With such a quick inning it wouldn't surprise to see Wicklander pitch the fourth.

Jacob Nesbit and Christian Franklin led off the third with singles, and Zack Gregory drew a walk to load the bases with no outs. But Arkansas came away empty handed when Heston Kjerstad struck out and Dominic Tamez grounded into a double play.

The Razorbacks have six hits but no runs to show for it.

The Cowboys pushed across one run, surprising for how well they batted against Connor Noland. OSU had two hits and drew three walks in the inning, but stranded the bases loaded. OSU also was assessed an out when Brock Mathis passed a base runner who was holding up at first base on a ball that took center fielder Christian Franklin to the center field wall. Mathis had an RBI single on the play.

Noland struck out leadoff hitter Hueston Morrill to get out of the inning. Patrick Wicklander is warming up in the bullpen and might come in for the third inning.

Curtis Washington reached with a two-out infield single, but the inning ended when Washington was caught starting toward second base on a pickoff attempt.

The Razorbacks have made good contact against OSU left hander Parker Scott, but haven't been able to push across any runs.

Connor Noland worked around a one-out walk in the first inning. Noland struck out two, including Kaden Polcovich with a inside breaking pitch that froze him at the hands and caught him looking.

That is a better start for Noland than against Oklahoma a few weeks ago when he could only pitch one inning because he reached his pitch limit quickly.

The Razorbacks loaded the bases with one out on singles by Christian Franklin and Heston Kjerstad, and a four-pitch walk by Dominic Tamez. But Cole Austin hit into an inning-ending double play to strand two.

Connor Noland will pitch the bottom of the first inning for the Razorbacks.