SEC strangers: The Wildcats and Hogs don’t get together often, but one showdown will link them forever 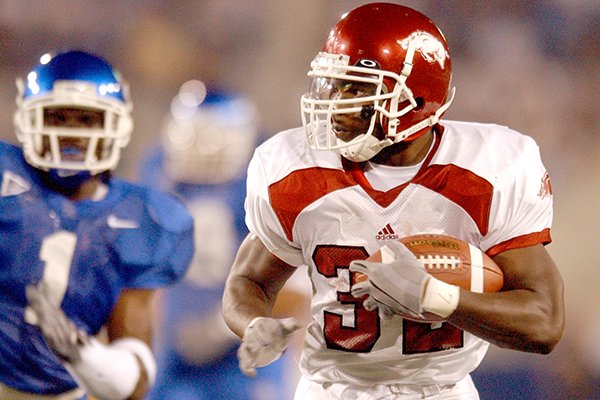 LEXINGTON, Ky. -- Reminders of the phenomena that was Jared Lorenzen will be all over Kroger Field tonight.

The Kentucky Wildcats will honor the memory of one of the most unique quarterbacks -- a 270-pound left-hander with a litany of nicknames such as the "Pillsbury Throwboy" and "J-Load" -- college football has ever known.

In a very rare Lexington appearance by the University of Arkansas (also 2-3, 0-2), these are the trappings awaiting the Razorbacks, who have lost two games in a row.

Kentucky is coming off a three-game losing streak and injury issues at quarterback that might force skill ace Lynn Bowden, the SEC leader in all-purpose yards, into a long stint as a literal Wildcat quarterback.

Lorenzen was the lovable losing quarterback in an epic seven-overtime battle between the Razorbacks and Wildcats played here on Nov. 1, 2003. Arkansas won 71-63 when Tony Bua recovered a Lorenzen fumble, forced by Vickiel Vaughn, at the Hogs' 1 on fourth down to end the game.

Lorenzen, who died this summer from heart and kidney problems, accounted for 365 yards and five touchdowns in the game. He also famously shouted at Wildcat fans leaving the stadium at halftime, "You're going to miss one hell of a game!"

Boy, was he right.

The Wildcats stand as Arkansas' least-played SEC opponent with only seven games in the record books. Kentucky leads the series by a 4-3 margin.

Arkansas tight ends coach Barry Lunney Jr. never has faced the Wildcats in 11 seasons as a quarterback (1992-95) and full-time assistant (2013-2019) with the Razorbacks.

"Talking to Coach Lunney and some of these other guys about going up there and playing, I mean, some of these guys don't recall doing that," Arkansas Coach Chad Morris said.

Seventh-year Kentucky Coach Mark Stoops said he and his staff have made sure the Wildcats know about Lorenzen's legacy and how he performed against the Razorbacks in 2003.

"Jared was exceptional in that game," Stoops said Wednesday. "We've definitely seen the highlights and actually showed it to our team [Tuesday]. Showed them highlights of Jared and talked about Jared and how we're honoring him. I wanted our players to be familiar with that and certainly showed them many of the highlights from the 2003 game."

The Razorbacks seem excited to play a team that's rarely on the schedule.

"It's nice," senior defensive tackle McTelvin Agim said. "You usually don't get SEC East opponents, so we finally get another one.

"We always get Missouri, but we get another one. We're excited to go to Kentucky and play our hearts out."

Among the Arkansas players, only quarterback Nick Starkel has seen the Wildcats in action. He was No. 16 Texas A&M's backup quarterback for a 20-14 overtime victory against the No. 12 Wildcats last season in College Station, Texas.

"Honestly, I think it's fun that we're going to play at a team's place that we've never played at," Starkel said. "They're going to have a lot of their fans there. We travel well, but they're gonna have home-field advantage. We take that as we've got to bring our own energy. We've got to create our own plays."

Arkansas offensive coordinator Joe Craddock, a quarterback at Middle Tennessee State, played at Kentucky in 2008, the same season the Razorbacks were last in Lexington.

"Almost beat them," Craddock said. "They tackled us on the 2-yard line on the last play of the game."

According to an Associated Press account of the game, Middle Tennessee's Eldred King was actually tackled at the 1 at the end of a Hail Mary heave from Craddock to preserve Kentucky's 20-14 victory.

Among Arkansas staff members, defensive coordinator John Chavis and defensive ends coach Steve Caldwell have coached in the most games at Kentucky as former longtime assistant coaches at Tennessee. Those Vols teams from 1989-2009 went 20-0 during a 26-game winning streak against the Wildcats, including 10-0 in Lexington, Ky.

"Any time I've been there, it's been a great venue," Chavis said. "They've done a lot to improve their facilities. They've got great facilities.

"I've never been up there when their fans didn't support their program, even some times when they weren't as good as they are right now. Their fans do a great job supporting them, and that's what you expect to see in the SEC."

In between, the seven-overtime thriller won by Arkansas is sandwiched in the middle of a pair of two-game winning streaks for the Wildcats.

Arkansas fans who make the trip might not recognize the Cats' stadium, which has undergone two renovations since their last visit.

Arkansas' last visit to Kentucky ranks as perhaps the most winnable game during the Bobby Petrino era that the Razorbacks let slip away, along with the inability to scoop and score in the 2011 Sugar Bowl against Ohio State.

The Razorbacks blew a 20-7 lead in the final 4:47 in its last visit to Kentucky. Arkansas threw an interception in Kentucky territory on its first drive, lost a fumble at the Kentucky 1 later in the first quarter and had to settle for field goals from the Wildcats' 2 and 6 in the second half. Randall Cobb caught touchdown passes of 32 and 21 yards from Mike Hartline in the final 4:15 to lead Kentucky's comeback.

But it is the 2003 seven-overtime thriller that most fans recall when they think of Arkansas-Kentucky.

"I remember a great atmosphere," said Houston Nutt, the former 10-year Arkansas head coach and the only man to win two seven-overtime games. "Jared Lorenzen, their great quarterback, was on one side and Matt Jones was on the other.

"If you didn't have this guy Lorenzen, if his left arm was free -- and I don't care how many people were around his legs, knees, whatever -- he could find a way to get that ball out. He could improvise. And as big as he was, he could still move just well enough."

DeCori Birmingham ran for 196 yards and 2 touchdown for the Razorbacks, while Jones added 112 rushing yards and 1 touchdown, and passed for 260 yards and 3 touchdowns.

"There was no moment too big for him," Nutt said of Jones. "Just as cool as you can be. And when you're 6-foot-6 and can run and escape, and you talk about improvising. There's another guy that when something broke down he could make it happen."

George Wilson, who would become a well-regarded safety for the Buffalo Bills, had nine catches for a game-high 172 yards, plus a touchdown and a two-point conversion catch for the Razorbacks.