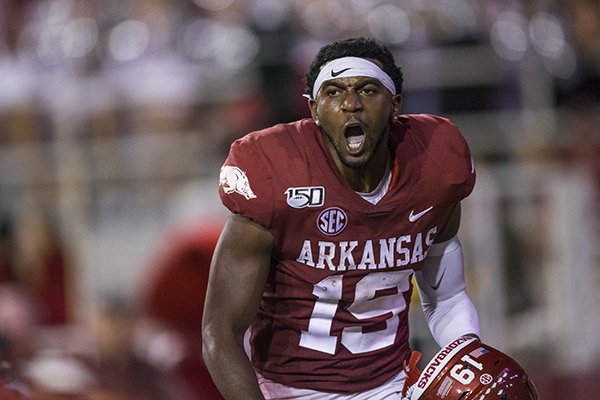 LEXINGTON, Ky. -- University of Arkansas Coach Chad Morris' decision to award a scholarship to Tyson Morris in August is looking like a pretty sound investment.

Morris has become one of the Razorbacks' most reliable receivers at a position hit hard by injuries.

Going into tonight's Arkansas-Kentucky game, Morris has nine receptions for 118 yards and a touchdown.

"He's made some key catches for us," Chad Morris said. "A young man that's providing great value, and he's maximizing his opportunities when he gets them.

Morris, a redshirt junior who moved from Helena-West Helena to Fayetteville when he was a high school sophomore, has gotten extra opportunities through the first five games because of several injuries among the receivers.

Senior Deon Stewart suffered a season-ending knee injury in training camp, and junior Jordan Jones has yet to play as he recovers from a high ankle sprain.

Morris has at least one catch in every game, including a combined six receptions for 86 yards against San Jose State and Texas A&M.

"I mean, nobody knew any of this would be happening, so it's kind of a shock to everybody," Tyson Morris said. "When the time comes, you've just got to be prepared."

Morris has played primarily the slot position, but against Texas A&M most of his 58 snaps came at an outside receiver spot, where his two catches resulted in first downs on third-and-long plays.

"He's been huge this year just stepping up," Starkel said. "A guy that could have said, 'Screw this, I'm not playing a lot. I don't really know what to do.' Earns a scholarship and starts making plays, starts making himself known. He's become a critical part of this offense."

"If somebody does go down, he can fill in that spot," Craddock said. "That's really tough to do."

Tyson Morris said slot is his favorite position, but he's glad to play on the outside as well.

"Coach [Justin] Stepp has always been big on us about learning concepts and not just your position," Morris said. "Learning a concept makes the whole offense easier overall as far as your alignments and techniques, so I'm able to switch positions at any given time and know what I'm doing. You can add stuff to your game.

"Anywhere I'm needed is where I want to play. If I can get on the field, I don't care where I play."

"Tyson's an incredible player," Brown said. "Very humble. He can do it all. Not a lot of people talk about him, but he's impressive.

"When you need him, he's going to show up. He knows the system and just does his job."

Morris enrolled at Central Oklahoma as a true freshman, then transferred to Arkansas as a walk-on.

"It was always my dream to play SEC football and play for the Hogs. So I just followed my dream."

In the first major scrimmage the Razorbacks held in the spring of 2018 after Chad Morris was hired from SMU, Tyson Morris caught a short pass from Cole Kelley, made a defender miss and raced 55 yards for a touchdown.

"Our very first spring, I was trying to figure everybody out," Chad Morris said. "I knew that Tyson would flash at times, and you would ask, 'Who is that guy?' "

Other staff members told Morris he was a walk-on.

"You just kept challenging him to stay on track and do things the right way and stay focused," Chad Morris said. "Great things happen when you do that."

Morris, who plays on the kickoff and punt return teams and caught four passes for 30 yards last season, said he was hopeful of being put on scholarship, but he didn't necessarily expect it to happen.

"Honestly, I just love football," he said. "So if I was still a walk-on right now, as long as they were letting me play, I'm cool with it.

"But [the coaches] giving me a scholarship was an honor. It made my parents happy, too."

Morris said his parents -- Isaiah and Synetra Morris -- encouraged him to attend Arkansas as a walk-on if that's what he wanted to do.

Isaiah Morris played basketball at Arkansas, but Tyson Morris said his father didn't push him to play that sport.

"When I told him I wanted to play football, he was fine with that," Morris said. "He became a football guy, too."

Rakeem Boyd, who leads the Razorbacks with 483 rushing yards, said he and Tyson Morris have become close friends.

"I'm really happy for him," Boyd said. "When he got the scholarship, I almost broke down in tears.

"That guy is just an outstanding player, and now he's getting the chance to finally get on the field and produce. It's amazing to see a guy like that."