Boyd gets early start on scoring 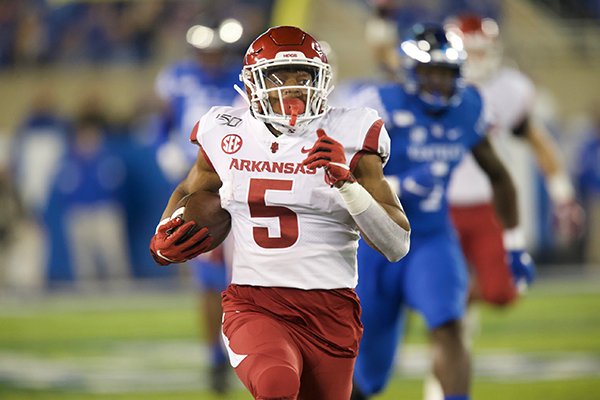 Arkansas running back Rakeem Boyd (5) runs for a touchdown during the first quarter of a game against Kentucky on Saturday, Oct. 12, 2019, in Lexington, Ky.

Junior Rakeem Boyd's 74-yard touchdown run with 14:18 left in the first quarter against Kentucky was the Razorbacks' quickest score on offense in three years.

Boyd's 74-yard touchdown run on the Razorbacks' second offensive snap of the game also was their longest scoring play this season.

Arkansas junior offensive lineman Myron Cunningham was back in the starting lineup at Kentucky after not playing in the previous game against Texas A&M.

Cunningham made his second start at left tackle in place of senior Colton Jackson, who was sidelined by a concussion.

Cunningham started the first three games of the season at right guard, then started at left tackle against San Jose State when Jackson also was in concussion protocol.

Arkansas freshman defensive end Mataio Soli was able to use his right hand more effectively because it wasn't heavily wrapped for the first time since he injured it in the season opener against Portland State.

Soli, who became a starter after the Portland State game when senior Dorian Gerald suffered a season-ending neck injury, had a large wrap on his hand the past four games that made it look as though he was wearing a boxing glove.

Terry Wilson, a junior and returning starter, suffered a season-ending knee injury in the second game against Eastern Michigan.

Junior Sawyer Smith, a graduate transfer from Troy, started the next three games but suffered shoulder, wrist and ankle injuries.

Bowden replaced Smith at quarterback late in Kentucky's previous game -- a 24-7 loss at South Carolina -- and led the Wildcats on their only scoring drive.

Kentucky Coach Mark Stoops said Monday that the plan was to start Smith against Arkansas after he had extra time to heal up with the Wildcats having an open date, but on Wednesday's SEC coaches teleconference he declined to say who he expected to start.

Saturday night's game marked just the ninth time Arkansas and Kentucky met since the Razorbacks joined the SEC in 1992, and the teams aren't scheduled to play again for five years.

According to the SEC schedule rotation announced in 2014, the next Arkansas-Kentucky game will be in 2024 at Reynolds Razorback Stadium.

Arkansas' rotating SEC East opponents between playing Kentucky this season and in 2024 will be Tennessee in 2020, at Georgia in 2021, South Carolina in 2022 and at Florida in 2023.

Kentucky junior Matt Ruffolo, who replaced Chance Poore as the team's kicker during the third game this season at Mississippi State, hit a career-long 50-yard field goal in the third quarter to cut Arkansas' lead to 13-10.

It was Ruffolo's third career attempt. He hit a 29-yard field goal at Mississippi State and missed a 47-yard attempt wide left in the second quarter against Arkansas.

Arkansas running back Chase Hayden wasn't dressed out for the second consecutive game. He suffered a concussion against San Jose State.

Kentucky honored the late Jared Lorenzen before Saturday night's game with several of his family members recognized in a ceremony on the field.

When Arkansas beat Kentucky 71-63 in seven overtimes in 2003, Lorenzen completed 28 of 49 passes for 326 yards and 2 touchdowns, and also had 3 rushing touchdowns.

White towels with Lorenzen's No. 22 on them were handed out to fans, who waved them enthusiastically before the opening kickoff.

Arkansas lost the pregame coin toss for the first time this season after winning it five times. Kentucky elected to defer and kick off to the Razorbacks.

Arkansas wore red helmets, white jerseys and red pants. It was the first time the Razorbacks wore that combination since the fourth game of last season when they lost 34-3 at Auburn.

Knox carried the United States flag, and Burks carried the Arkansas flag when the Razorbacks ran onto the field.