Hogs keeping their eyes on current roster of Senators 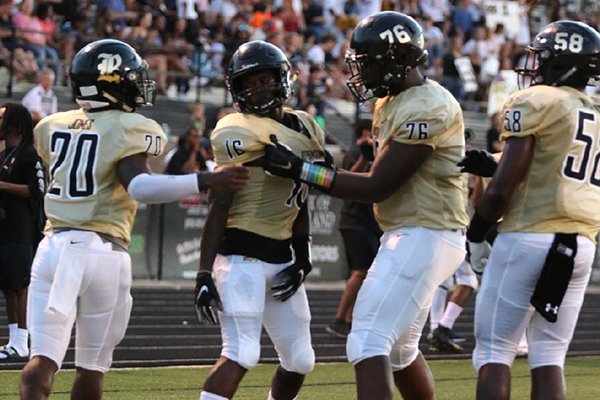 The University of Arkansas has four former Joe T. Robinson Senators on its roster, and the Hogs are looking to add more.

Sophomore offensive lineman E'Marion Harris, 6-6, 305 pounds, has scholarship offers from Arkansas, Alabama, Oklahoma, TCU, Tennessee, Mississippi State and others. He received the offer from the Crimson Tide as an eighth-grader.

A son of Elliott Harris, who played defensive end for the Hogs from 2001-04, Harris has always been in the 99th percentile in height and weight for his age group.

"I still remember when they measured him on that trip and he was 6-foot and 255 as a 10-year old," Maupin said.

Maupin said Arkansas is very attentive to Harris, who turned 15 on Sept. 8.

"Obviously with his dad being a legacy, they do a good job every time we go up there," Maupin said. "They make him feel extremely special. They do a good job of making sure he knows he is loved and welcomed up there."

College coaches can't initiate contact with prospects until Sept. 1 of their junior year, but recruits can reach out to coaches at anytime. Harris often calls Coach Chad Morris.

"He calls every once in awhile," Maupin said. "They made it clear they want him calling on a regular basis. You can tell they're trying to take care of the homegrown talent and take care of a legacy that obviously has tremendous potential.

Maupin said Oklahoma and TCU are also doing a good job recruiting Harris. Because he is no longer a secret, Maupin doesn't push Harris' film to colleges as much as he did early in the process.

The Senators have others the Hogs are evaluating, including senior linebacker J.T. Towers.

"He's a special case. I think his recruitment has kind of restarted this year because we've unveiled him as a defensive prospect," Maupin said.

Towers, who has a 4.1 grade-point average and a 26 on the ACT, is playing catch up in the recruiting process. Colleges normally start evaluating prospects as early as their freshman or sophomore years, but with Towers being a senior and playing a different position, this is the time to get noticed.

"Senior-year recruiting is tough," Maupin said. "A lot of these places have been dialed in on who they're signing for two to three years, so these guys that jump into the fold as a senior, it's tough on them because a lot of these teams already have their mind made up."

He has 34 tackles, 11 tackles for loss, 2 sacks in three games this season after missing time with an injury.

Junior running back-defensive back Hunter Smith Jr., 6-0, 175, also is getting a look from the Razorbacks.

Smith has rushed 92 times for 860 yards and 8 touchdowns, while making 51 tackles, including 3 for loss. Memphis is showing strong interest and could be Smith's first offer.

"They're a school I could see pulling the trigger at any minute," Maupin said. "H'e s great kid, wonderful family, hard worker."

"They're doing a really good job of keeping their thumb on Deldrick as well," Maupin said.