State of the Hogs: Opportunity knocks but Arkansas can't answer 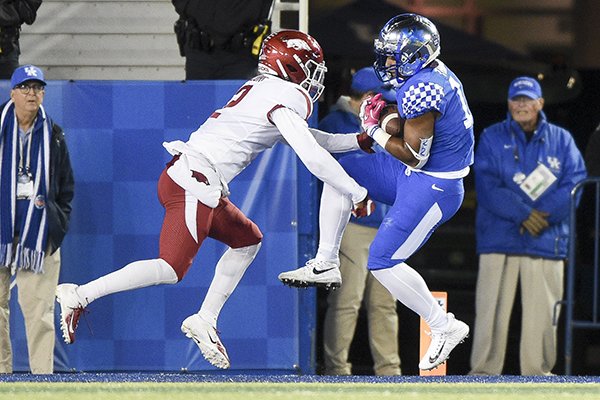 Kentucky receiver Clevan Thomas Jr. (18) catches a touchdown pass while being defended by Arkansas defensive back Kamren Curl (2) during a game Saturday, Oct. 12, 2019, in Lexington, Ky.

Opportunity presented itself to the Arkansas football team at Lexington. Standing just through an open door was the end of a 13-game SEC losing streak and the first big victory of the Chad Morris era.

And, there were at least a few Razorbacks willing to step through that door. Quarterback Ben Hicks and wide receiver/punt returner Treylon Burks made plays to reclaim the lead in the fourth quarter, then tight end Cheyenne O’Grady and Hicks seemed to be ready with a response to a Kentucky answer.

That’s where it all came crashing to a halt for the Razorbacks. They failed on downs, the last two plays in passing situations when Hicks was swarmed after busts by left guard Austin Capps and right guard Ricky Stromberg on consecutive plays.

First, Kentucky defensive tackle Calvin Taylor (6-9, 300 pounds) bested Capps with an inside swim move. He was on top of Hicks instantly for a 7-yard sack. On fourth-and-15, tackle T. J. Carter (6-4, 287) did the same to Stromberg and had Hicks his arms wrapped around Hicks as the quarterback tried to launch a pass toward the end zone. Taylor batted it down.

Lynn Bowden knew what to do with the game’s final 2:32. The converted wide receiver – playing quarterback because of two injuries – kept the ball three straight times against an overloaded front for 5, 51 and 16 yards. He took a knee on a fourth as the Wildcats ended their own three-game SEC losing streak.

Until then, it looked like the Hogs had a chance to push through that door. There was opportunity.

They got a break when Sam Loy’s punt took a big bounce and rolled an extra 25 yards. The 48-yard punt pinned the Wildcats at their 2-yard line.

The Hogs shot the gaps to hit backs close to the goal line on two straight plays for no gain. The three-and-out and a 26-yard punt return by Burks put the Hogs at the UK 29.

That field position break was cashed easily. The Hogs never faced a second down. Burks took a lateral and skipped the second option of the play – a double pass – for a 11-yard scamper on the sideline. Hicks hit Burks on the next play for 15. Boyd covered the final 2 yards for a 20-17 lead with 10:35 left.

The Wildcats responded with a six-play, 75-yard drive. Straight handoffs inside netted 25 and 27 yards. Bowden erased second-and-13 on a roll to his right that went for the final 24 yards. He ran through two arm tackles. The final score was set at 24-20 with 6:53 left.

Bowden was fast, elusive and strong all night. He never once looked uncomfortable and wasn’t close to a turnover. He rarely attempted a difficult pass. He completed 7 of 11 for 78 yards and one touchdown, a 10-yard fade to Clevan Thomas against man coverage by Kamren Curl.

The Hogs dominated the game’s first 24 minutes. Rakeem Boyd dashed 74 yards on the second play of the game and Connor Limpert made field goals of 28 and 44 yards. That gave them a 13-0 lead with 5:48 left in the first half.

But settling for those field goals would eventually come back to haunt them. They couldn’t take advantage in the passing game when Kentucky sent linebackers and safeties to stop the run.

It was what Morris, the second-year coach with a 4-14 mark, would mention first on his post-game radio show and again in his opening remarks in the interview room.

“You can’t settle for field goals,” he said, noting that kicking the field goals on fourth-and-9 and fourth-and-10 “was the right call. But we have to put ourselves in position to score touchdowns. That came back to bite us.”

Ten minutes later, he said, “Just extremely frustrated. Did not feel like we executed in the key moments when we needed to the most, to get a stop or to get the ball.”

Then, it was back to the missed chances at touchdowns in the first half.

Starting quarterback Nick Starkel never found his accuracy or consistency with his passes. He was 7 of 19 for just 41 yards and was benched in favor of Hicks after two straight three-and-outs to open the third quarter.

Some of his passes were dropped, but he was often behind the mark to open receivers.

Hicks was 5 of 8 for 81 yards and also made positive yards several times when pressured. Clearly, Hicks was the better of the two quarterbacks and left Morris no option but to indicate the quarterback competition is open again.

“We came out in the second half and Nick was not in rhythm,” Morris said. “He was missing some balls. I knew Ben would provide us a spark.”

That’s what the Wildcats got from Bowden, their leading receiver with 30 catches. He worked at quarterback in UK’s bye week with both Terry Wilson (surgery) and Sawyer Smith (leg, arm, shoulder injuries) unavailable. Smith did warm up briefly when the Hogs spurted ahead in the second quarter, but never entered the game.

Bowden did it mainly with his feet and often on broken plays, or scrambles. He made 196 yards on 24 carries.

His execution on a short play list was almost flawless. He had zone read keepers, draws and quarterback keepers on pass plays as he allowed the man coverage of the UA defense to spread down the field.

The Hogs gave up some third-and-long plays on lost containment, but stopped three short-yardage plays, including a fourth-and-1 when UK coach Mark Stoops gambled from his own 32-yard line. That led to a Limpert field goal.

Earlier, the Wildcats dodged a bullet when Arkansas snapper Jordan Silver appeared to recover a fumbled punt, but referees gave possession to UK.

Those would be the only major errors by the Wildcats. They dominated the third quarter with field position and a solid running game. They would finish with 330 yards rushing and lead in total offense, 418 to 307.

It was the lack of execution in the passing game that caused the struggles. Morris saw open receivers.

“I thought tonight was we had a couple of opportunities,” he said. “We had C.J. open on one and we were just unable to execute, just to hit the play.

“It wasn’t that we didn’t have opportunities to score. Especially in that first quarter of the game, getting down there, we’ve just got to execute. That’s really what it comes down to.”

Morris was quick to confirm that the quarterback job is open.

“Yes,” he said. “Yes, yeah, we’ve got to get something that’s going to provide consistency and provide a spark for us and we’ll re-evaluate that as we get back in.”

Asked about the play of Burks in the fourth quarter, Morris said, “We’ve got a lot of young guys out on that field right now. Treylon’s one of those guys who has a dynamic future ahead of him. We’ve got to continue to grow him. He has definitely proven this stage is not too big for him.”

There were questions about the mental state of the team. The SEC losing streak continues to grow. They are looking at two tough weeks, at home against Auburn then a trip to juggernaut Alabama.

There is no easy answer, but the obvious one is to continue to get effort. Morris saw effort.

Auburn was mentioned and Morris brought up the running game, the focus of the offense under Gus Malzahn. The Hogs left their defense on the field too much against the UK running game. The Wildcats led in time of possession, 35:05 to 22.49.

“Well, I think we all know the caliber of team that Auburn is and how they like to run the football,” Morris said. “But again, as I’ve said before, it’s about how we play, not who we play, that I’m more concerned with.”

Morris looked at the stat sheet to point out UK’s 54 running plays out of 66 total.

“When you’re going against 54 run attempts, especially that third quarter, they were on the field this entire amount of time,” Morris said. “That’s entirely too much to be on the field. We couldn’t get off the field.”