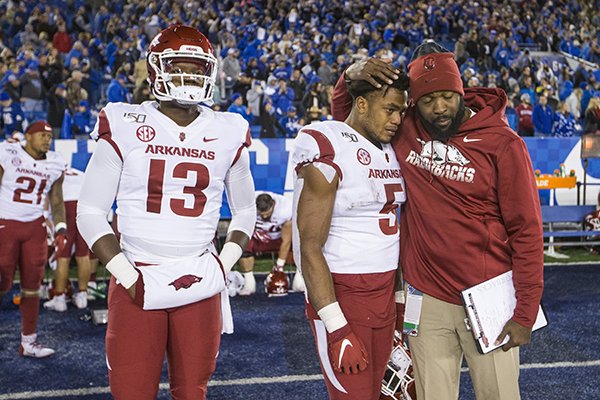 LEXINGTON, Ky. -- The Arkansas Razorbacks drove into the red zone, knocking at the door of another shot at an upset late in the fourth quarter at Kentucky on Saturday night.

Once again the door slammed shut.

Kentucky held the University of Arkansas on downs inside their 20-yard line with less than three minutes left, then unleashed versatile Lynn Bowden Jr. for more havoc to polish off a 24-20 victory before a crowd of 57,060 at Kroger Field.

The Razorbacks struggled all night to contain Bowden, the receiver who moved to full-time quarterback due to injuries. Bowden ran for 196 yards and two touchdowns and threw for another score for the Wildcats (3-3, 1-3 SEC), who snapped a three-game losing streak.

Kentucky rushed for 330 yards on 54 carries and outgained the Razorbacks 418-305 in total yardage.

The Razorbacks were left to rue the inability to capitalize on momentum and great field position in the first half after Rakeem Boyd broke away for a 74-yard touchdown on the second play of the game.

Arkansas was in scoring position twice more, while the Wildcats were sputtering out of the gate and came away only with field goals. One of those came after the Wildcats tried a fourth-and-1 running play from their own 35, and Arkansas' Jonathan Marshall forced a fumble that was recovered by linebacker De'Jon Harris.

"Just extremely frustrated," Arkansas Coach Chad Morris said. "I did not feel like we executed in the key moments when we needed to the most, to get a stop or get the ball.

"We are just not at the point in our program where we can settle for field goals. We've got to score touchdowns, and we were unable to do that, especially early on when we had the momentum."

The Hogs lost their second game in a row by four points in which they were driving late in the game and had to score a touchdown. Again, senior Ben Hicks was at quarterback with the game in the balance, but this time he replaced ineffective starter Nick Starkel, who completed 7 of 19 passes for 41 yards. In a 31-27 loss to Texas A&M two weeks ago, Hicks came in after Starkel sustained a left arm contusion.

Hicks was more on point, hitting 5 of 8 passes for 81 yards. He took over after the Hogs went three and out on their first two series of the second half.

"We needed a spark, and I felt Ben was going to provide it for us," Morris said.

Bowden's second touchdown, a 24-yard run over the right edge, gave Kentucky a 24-20 lead with 6:53 remaining to end a six-play, 75-yard march that included three runs of 20-plus yards.

Arkansas took over at its 18, and Hicks quickly put a solid drive together, starting with his 13-yard scramble to convert a third-and-3 play. After a 9-yard run from Boyd, Hicks found Cheyenne O'Grady for passes of 15 and 22 yards to reach the Kentucky 17 with less than three minutes left.

The Wildcats stopped a Hicks run for 2 yards, before he threw incomplete for Mike Woods on second down. Calvin Taylor logged a 7-yard sack, then T.J. Carter hit Hicks as the quarterback threw on fourth down to force an errant pass.

With 2:32 remaining, the Hogs still had a chance to get the ball a final time, but Bowden gashed the tiring Hogs with runs of 51 and 15 yards to ice the victory.

"It was pretty much just the regular offense, what the coaches felt comfortable with going into this week," said Bowden, who was told two weeks ago he would likely start at quarterback coming off an open date.

"So proud of Lynn, obviously, for what he's done and how he prepared the last couple of weeks, and also the team," Kentucky Coach Mark Stoops said.

The scoring was limited until the teams traded three touchdowns midway through the second half.

Kentucky took its first lead at 17-13 with 1:50 left in the third quarter on Bowden's 10-yard fade pass to Clevan Thomas against safety Kamren Curl to cap a 48-yard drive.

Burks ran 11 yards with a lateral that was setting up as a receiver pass, then caught a 15-yard slant to the Kentucky 3. After a pass interference call on the Wildcats, Boyd ran for a 2-yard score for his second touchdown to put Arkansas back ahead 20-17.

Boyd ran for a career-high 134 yards, and helped the Hogs strike early on his 74-yard romp to hold momentum most of the first half.

Boyd rushed for 110 yards in the first half and averaged 12.2 yards per carry in the opening two quarters.

Arkansas drove into Kentucky territory on each of its first four series, but scored only six more points the rest of the half.

Bowden drove the Wildcats into Arkansas territory on three of four first-half possessions, but Kentucky suffered from a couple of drive-stunting penalties and other mistakes.

The biggest blunder came when Stoops elected to go for it on fourth and 1 from his own 35 in a Shotgun formation late in the first quarter.

Marshall got quick penetration and knocked the ball free as Bowden tried to hand off to Asim Rose in the backfield. Harris pounced on the loose ball at the Kentucky 32.

"They ripped off the first run early ... and after that the defense really settled in and played good," Stoops said. "We put them in a tough situation when I went for it on fourth down and didn't get it ... and they responded with holding them to a field goal."