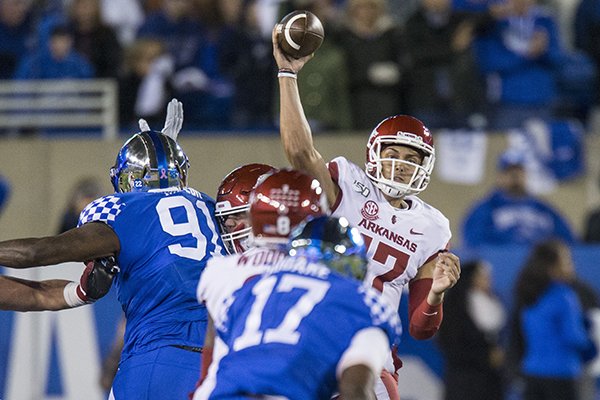 Junior Lynn Bowden, a standout receiver for the Wildcats who started at quarterback in place of injured Sawyer Smith, completed 7 of 11 passes for 78 yards.

Nick Starkel, the Razorbacks' junior quarterback, completed 7 of 19 passes for 41 yards before being replaced with 1:50 left in the third quarter by Ben Hicks.

Hicks helped Arkansas finish with 122 passing yards, but that wasn't enough as Bowden -- who also had 196 rushing yards -- rallied Kentucky to a 24-20 victory.

The lack of a passing game doomed the Razorbacks after they had jumped out to a 13-0 lead in the first half.

Arkansas Coach Chad Morris said Starkel was healthy after he had been knocked out of the previous game against Texas A&M two weeks ago when he injured his left arm trying to make a tackle after throwing an interception.

"He's worked out for two straight weeks with us," Morris said. "Hasn't missed a workout.

"But I just felt he wasn't in sync, he wasn't in rhythm. I felt it early in the game, and really more so even at halftime."

But Morris didn't replace Starkel with Hicks until late in the third quarter after Kentucky had taken a 17-13 lead on Bowden's 10-yard touchdown pass to Clevan Thomas.

"I thought we've got the lead, we've got a little momentum on our side, let's see what this third quarter holds," Morris said of keeping Starkel in the game to open the second half with Arkansas leading 13-7. "And we go two three-and-outs."

Starkel was 0 of 4 on the Razorbacks' first two series of the third quarter.

"We needed a spark," Morris said. "And I felt Ben was going to provide it for us."

After Kentucky regained the lead, the Razorbacks moved from their 18 to the Wildcats 15 as Hicks scrambled for 13 yards, then completed passes to tight end Cheyenne O'Grady for 15 yards and 22 yards.

But Kentucky's defense held as Hicks, under a heavy rush, threw an incompletion on second down, was sacked for a 7-yard loss on third down, and threw incomplete on fourth down.

It was a similar ending to Texas A&M's 31-27 victory over Arkansas when Hicks came off the bench and led a touchdown drive to give Arkansas the lead, then after the Aggies went back ahead, led a drive that ended at the Texas A&M 19 in the final seconds.

"It's tough again to lose like that in back-to-back [games], being that close," Hicks said. "But we're a tough team.

"We've obviously showed the last two games in how we've played and fought. But at the end of the day, we've got to find a way to get it done.

"I had two opportunities to win two big ballgames, and I came up short. So that's very frustrating for me."

"I thought he did well," Morris said. "Obviously, I wish we would have the last two plays back. We had too much pressure on us on the third- and fourth-down plays."

Hicks and Arkansas faced fourth and 15 from the Kentucky 22 on the Razorbacks' final offensive snap.

"Just trying to give somebody a chance, specifically on that last play trying to give Treylon a chance," Hicks said. "Looking back on it, I wish I would have scrambled and given myself some time.

"When you're backed up like that, typically the best thing you can do is buy yourself some time, and I just didn't do it. It's frustrating, but again, just trying to give somebody a chance."

Hicks, a senior graduate transfer from SMU where he played three seasons for Morris, played well against Texas A&M. He completed 15 of 27 passes for 188 yards and 1 touchdown without an interception against the Aggies.

The strong performance by Hicks in the previous game -- combined with Starkel's struggles at Kentucky -- prompted a question of whether Hicks was surprised Morris didn't put him into Saturday night's game earlier.

"I'm not going to talk about that," Hicks said. "I want to play. I love football.

"I'm chomping at the bit every chance I can get. But I'm not going to say anything about that."

Morris said the quarterback situation will be re-evaluated this week when the Razorbacks prepare to play No. 12 Auburn, which had an open date Saturday.

"I'm just going back to work," Hicks said. "That's what I've done since I got here."