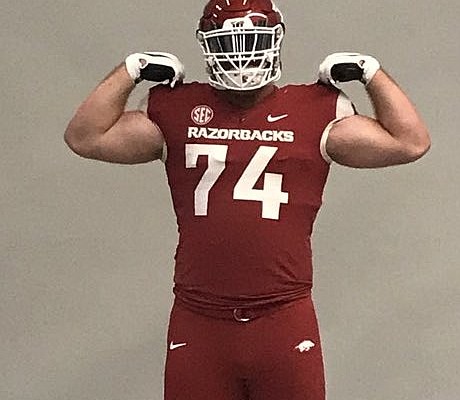 Arkansas' football coaches and the Razorbacks’ track team were factors that helped the Razorbacks make the cut for one of the top offensive linemen in the nation.

In addition to being an ESPN four-star football recruit, Foster is considered one of the top track and field prospects in the nation. He has best throws of 187 feet, 2 inches in the discus and 65 feet, 3.5 inches in the shot put.

“I love talking to coach Fry and Coach Mods and we are really building a relationship,” Foster said. “They are trying to push that program in the right direction."

Foster said the coaches will let him throw shot put and discus in college.

Arkansas’ 41 team national championships in track and field are attractive to Foster.

“They have a tradition of winning national championships there and that's the type of culture there," he said.

ESPN rates Foster the No. 4 offensive guard and No. 129 overall prospect in the nation for the 2021 class. Foster visited Fayetteville in March and came away impressed.

“No set in stone plans, but I do want to get back up there,” Foster said.