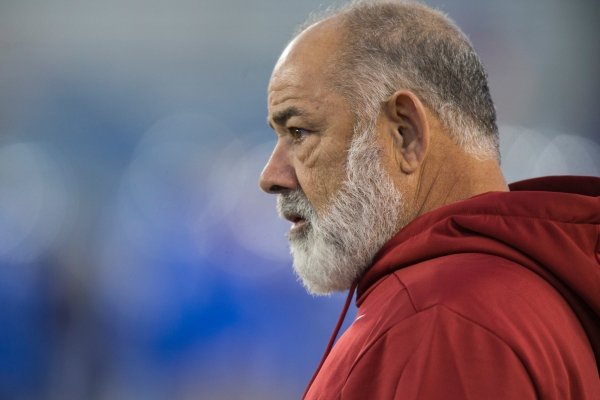 • There is an OR listed at the quarterback position this week between Ben Hicks and Nick Starkel.

• Senior offensive lineman Colton Jackson is down as a starter at left tackle this week. He did not travel to Kentucky on Saturday. Chase Hayden is still listed as the third-string running back.

• Linebacker/Nickel back D'Vone McClure is missing from the depth chart this week.

• We're not stringing things together to finish games, and we've got to make things more clear for our guys so they can execute in key moments. They want to win, they're playing extremely hard and they're giving us everything they've got. We have to take steps and find ways to win. The only thing we can do is keep our head down and work.

• Looking forward to playing Auburn and getting back home in front of our fans. We'll have a lot of recruits on campus. Appreciate our fans traveling to Kentucky. We're not going to flinch. We're going to put our head down and get to work.

• You look at every option after putting yourself in position to win and coming up short. Looking back on it, you wish you had done some things different in terms of the final possession of the first half in which Arkansas had two timeouts and the ball with under one minute to go.

• Nick Starkel and Ben Hicks will get the first-team reps. They were all ready to get back in here and get back to work. The whole thing is consistency with the offense. That's what we're looking for in all of this.

• You're 20 yards away from winning the last two games. We have to put ourselves in good position. We've got to be able to find a way to get the ball in the end zone. We have to finish the deal, and we haven't done that.

• On Starkel: He got hit early, but that has never rattled Nick. He has great talent. We look at all the technical things from a QB standpoint. Sometimes you have to just stand in the pocket. He'll be the first to admit he wasn't on point Saturday. He'll work through these things and he'll be just fine.

• D'Vone McClure: I spoke with him last night, yesterday afternoon, and he shared with me he wants to step away from the game and focus on academics and supporting his family. We left it at that at that time. McClure has a son.

• We as coaches have to do a great job making things clear for our players. Treylon Burks is electric, and we have to understand he's a freshman and we can't overload him. We're still working on getting aligned on the line of scrimmage. I do believe, yes, we can find ways to get Burks the ball without overloading him.

• Colton Jackson: The health and well-being of our players is first and foremost. He was out practicing yesterday, and I anticicate him playing this week.

• On the defense: I've challenged our coaches and team that we have to create depth and play more guys. Do I think that had anything to do with us wearing down in the fourth quarter? Any time you play 37 minutes, it's hard. When we needed to make a stop we were unable to get one. We had one miscommunication call, and it cost us. It was on the touchdown that allowed Kentucky to take the lead late. We had boundary pressure on, and it came from the wrong side. It wasn't a lack of being worn down that led to that. We were just not aligned properly.

• On Chase Hayden: He started working out last week and he was with us yesterday.

• Rakeem Boyd is as effective as anyone in the conference and is playing as well as anyone. He wants it really bad and he's giving great effort. Our message is we have to keep playing hard and playing tough, and he's doing that. We anticipate him being fine this week and with us Saturday.

• We have changed some of our gameday routine a little bit. We got to the stadium earlier and did some flexing at a group. It's taken us two quarters to get going for our 6:30 p.m. kicks. As far as cutting back on practice time, we're not going to do that at all.

• Jordan Jones: We're still kind of seeing where he is in terms of his health. He's struggling to run without pain. Don't figure he'll be back this week.

• Auburn has speed all over. Defensively, they're as good up front as anyone. They play extremely hard and they have depth. Kevin Steele is a great coach. His guys tackle really well. It stands out on tape. Bo Nix is a great, talented quarterback. He's a freshman, but he's doing a good job running the offense. He's effective running the ball. They want to run the football. They have a couple of other running backs behind the injured Boobee Whitlow. They have great speed. Seven defensive starters are back, and six offensive starters return, too.

• Young defensive backs: You can lose your confidence back there in a hurry at that position. The worst thing we can do is put a guy out there then we lose him for a lack of confidence. We have to bring those guys along.

• K.J. Jefferson: Extremely talented. He's done a great job with scout team. We'll keep bringing him on. We'd love to redshirt him if we could. We'll see how that goes.

• McClure is stepping away for personal reasons. He hasn't entered the transfer portal as of me walking down here to the interview room.

• Tired of being tired, but certainly disappointing day on Saturday. The kids played hard and we had a couple of situations that didn't go our way. There was one play where we busted a call in terms of getting it in and that made a difference. Team played hard. There are things we can build on, and we have to get ready for Saturday.

• Bo Nix is a dual threat. You have to account for him in their offense, and the staff has prepared him well to play in the SEC.

• We did a good bit of loading the box on Lynn Bowden. I don't think we were mentally prepared to go out there late. He made a few throws that made the offense stay on the field, and he also had some runs in passing situations and you have to be able to make those plays defensively.

• Mataio Soli, who had his right hand cast removed prior to Kentucky: It's the first time he's been able to grasp with that hand. He's going to get better and better. What I saw, there wasn't a lot of difference having it off. He'll get better.

• Young defensive backs: We're trying to get them ready. We owe it to this team and each player. Last year we had to throw Bumper Pool out there before he was ready. Now, he's a better player. He withstood the season. We're going to continue to push the envelope with these guys. This game turned out to be a different game than we anticipated three weeks ago. We went with the more-experienced guys last week.

• We've got 3-4 players who are ready to play and fill the spot left by McClure. He mentioned every scholarship linebacker except Andrew Parker.

• Pool is a very talented young man, and we expect him to get better. He played very passionate and made a lot of plays. It would have been better if we had won, but I was excited about the way he played.

• Auburn has some of the fastest guys in the nation. You'll see reverses, throwbacks and all of that. They intend to use the receivers they have to push the ball down the field. They also want to run, and you have prepare for it all.

• Auburn has two backs who aren't quite as big as Whitlow, but they're probably faster. They're not going to change their offense because he's not there. Gus Malzahn has playmakers he wants to get the ball to, and they'll do that.

• We have to grow together. Heck, we have to be a family. We take a lot of pride in talking about that and being that. It's not going to splinter. There's times in life when you want to quit and give up, but our guys will not quit or give up.

• Derrick Brown, he's probably the best interior lineman we've ever faced. He gets off blocks really easily. You see in the Florida game, he picks up a fumble and is really fast down the sideline. He's a good player we're going to have to get ready for.

• A lot of the things Nick missed Saturday were in the RPO game and quick game. We felt like he threw behind receivers. He's aware of the technical issues, and we worked that yesterday at practice. ... I thought he did a nice job taking care of the ball the other night. We didn't turn it over. We had a chance to win in the fourth quarter.

• I haven't seen a shift in confidence in either Ben or Nick. I don't think they've lost any confidence.

• On the final drive at UK: We schemed up a quarterback draw, and it was a good design. Myron Cunningham got caught up a little bit on that play. Second play was an RPO. We had what we wanted in Mike Woods on a slant, but missed him. Gave up a sack on third down, then fourth-and-long, they dropped everybody and Ben got hit. You're always going to have second thoughts about calls. But if we could have hit Mike Woods or handed the ball off to Rakeem Boyd on the RPO we could be talking about something completely different.

• Second play of the game was big for us. We creased them, so we kept kind of coming back to that kind of scheme. Again, we can get T.J. Hammonds more involved. I'm really pushing to get A'Montae Spivey in there. It's hard to put him in there vs. SEC opponents, though, when the game could come down to one play.

• Ben may have been looking over his shoulder at Nick early in the year. I don't think Nick has felt that the last few weeks. We made it clear he was our guy, then he got hurt. I hope those guys are preparing as if they're the starter. ... I'd love to be in a situation where we have a guy and he's consistent and stays hot throughout a game. We needed a spark the other night, so we went with Ben. I hope we can settle on a guy, and I have to get that out of those guys. We can do a better job scheming, too.

• Being more aggressive: I've tried to do that. The red zone woes is something we have to get better at. We need to score touchdowns instead of kicking field goals.

• On Jefferson: We challenged him a couple of weeks ago. The biggest thing with him is he's taken a big step since the bye week. I quiz him on the offense even though he's not the starter. He's learning and doing a good job. If he does continue to to grow, who knows, we could have a package for him later in the year.

• On moving the ball on Auburn: We have to have a great plan and great protection plan. Not many teams have had much success running the ball against these guys. They have a lot of speed. It jumps off the tape when you watch it. We're going to have to use some different things to try to move the football against them.