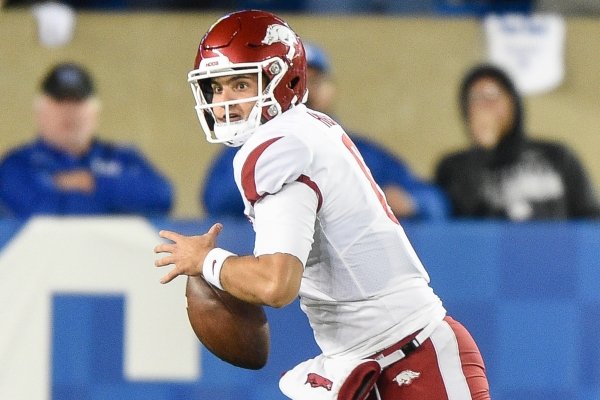 LEXINGTON, Ky. -- Halfway through the season, the University of Arkansas is still struggling to find a starting quarterback.

Razorbacks Coach Chad Morris said the position will be re-evaluated this week after Kentucky rallied from a 13-point deficit to beat Arkansas 24-20 on Saturday night at Kroger Field.

"We've got to get something that's going to provide consistency and provide a spark for us and we'll re-evaluate that as we get back in," Morris said.

It's not the best time for Arkansas (2-4, 0-3 SEC) to be trying to figure out who should start at quarterback considering Auburn (5-1, 2-1) is the next opponent Saturday at Reynolds Razorback Stadium, but what choice does Morris have?

Quarterbacks Ben Hicks and Nick Starkel -- graduate transfers in their first season at Arkansas -- have both struggled as starters and played better off the bench.

Hicks and Starkel have combined to complete 64.1% of their passes in backup roles compared to 46.9% as starters.

Hicks, a senior who played three seasons for Morris at SMU, combined to complete 21 of 45 passes (46.6%) for 241 yards without a touchdown or interception in his two starts against Portland State and Ole Miss.

Playing in relief of Starkel against Texas A&M and Kentucky, Hicks has completed 20 of 35 passes (57.1%) for 269 yards and 1 touchdown without an interception.

Starkel, a junior who transferred from Texas A&M, completed 57 of 121 passes (47.1%) for 811 yards and 6 touchdowns with 6 interceptions in starts against Colorado State, San Jose State, Texas A&M and Kentucky.

Playing off the bench against Portland State and Ole Miss, Starkel has completed 21 of 29 passes (72.4%) for 249 yards and 4 touchdowns with 1 interception.

Redshirt freshman John Stephen Jones and true freshman K.J. Jefferson haven't played this season, but Morris didn't rule them out of the quarterback re-evaluation process this week along with Hicks and Starkel.

"I think all options are open," Morris said.

Arkansas running back Rakeem Boyd, who rushed 15 times for 134 yards and 2 touchdowns at Kentucky, said the uncertainty at quarterback isn't an issue for the players.

"The coaches know what they're doing," Boyd said. "Whoever they put out there, I'm fine with. Whatever helps the team, let's do it."

"We're not that much concerned about what's going on with the offense, especially not looking at it in a negative way," Harris said of his thoughts as a defensive player. "Whoever Coach Morris puts at quarterback, we just support the decision."

Hicks said he's going to continue to prepare as he has since transferring to Arkansas in January.

"I'm just going back to work," Hicks said. "That's what I've done since I got here.

Immediately after the Texas A&M game, Morris said Starkel would remain the starter despite Hicks hitting 14 of 27 passes for 188 yards and 1 touchdown.

"When [Morris] named Nick the starter after I got to play, I just went back to work," Hicks said. "That's all I know, and that's what I'm going to keep doing.

"I'm just trying to be a great leader for the team and be a great teammate. That's what I'm going to do next week."

Hicks, who replaced Starkel against Kentucky with 1:50 in the third quarter, hit 5 of 8 passes for 81 yards. He led Arkansas to a touchdown and moved the team to the Wildcats 15-yard line with less than three minutes left before the drive stalled out.

Hicks said it hasn't been tough staying focused after being replaced as the starter.

"I just love playing football," Hicks said. "I'm chomping at the bit at every opportunity I can possibly get. It'd be silly of me not to be ready to play when I got my opportunity. That would be very immature of me as well. I'm just trying to enjoy it.

"I'm running out of opportunities to play college football. The opportunities are running thin, so I'm just trying to be ready and have as much fun as I possibly can."

The Razorbacks haven't had much fun this season while their SEC losing streak has been extended to 14 games.

Arkansas also needs to find a starting quarterback for the Auburn game.