Schedule doesn't get any easier 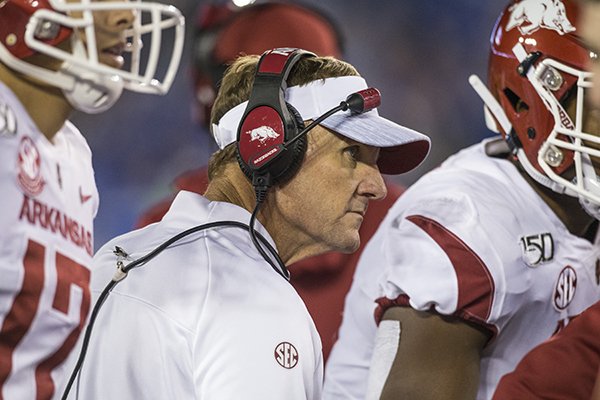 Arkansas coach Chad Morris is shown during a game against Kentucky on Saturday, Oct. 12, 2019, in Lexington, Ky.

LEXINGTON, Ky. -- The Arkansas Razorbacks have played back-to-back SEC opponents to within four points each, but the end result was two more losses that have increased their SEC losing streak to 14 games.

The path gets even tougher for the Razorbacks, who completed the more mild first half of their schedule at 2-4, including 0-3 in the SEC, following Saturday's 24-20 loss at Kentucky.

Now comes the more treacherous segment, starting Saturday at 11 a.m. against No. 11 Auburn, which is coming off an open date. The Tigers opened as a 17 1/2 point favorite against the Razorbacks on Sunday.

Following that, a road date at No. 1 Alabama and a home game against Mississippi State looms. After Western Kentucky and an open date, the Razorbacks travel to No. 2 LSU and host No. 22 Missouri.

"Every loss is a tough loss," linebacker De'Jon Harris said. "You prepare so hard, so you don't go out there on a Saturday expecting to lose. ... Fourteen straight SEC losses is real frustrating, but we've just got to keep grinding and hopefully one of them will come up eventually."

Coach Chad Morris said he was "absolutely" certain the Razorbacks could turn things in the right direction this season.

Linebacker Bumper Pool was asked about battling through the 14 consecutive SEC losses.

Coach Chad Morris particularly lamented the disparity in the third quarter, when the Wildcats had the ball for 11:15 compared to 3:45 for Arkansas. The Razorbacks went three and out on their first two possessions of the second half and made only one first down in the third quarter.

"The defense was on the field entirely too much in the third quarter," Morris said. "Two three and outs.

"We had the ball for 3:45. It's hard to hold on to any momentum when you do that. That was very disappointing."

"We didn't want to be on the field that long, but it happens," he said. "We could have played all night if we needed to."

Said linebacker De'Jon Harris, "I just think some guys, we were just out of position. We probably got a little winded in the second half and we were getting pushed around. That was the problem at the end of the game right there."

Tailback Rakeem Boyd posted his sixth career 100-yard rushing game with a career-high 134 yards, even while suffering a sprained AC joint in his right shoulder late in the first half.

Boyd had surgery to repair his left shoulder during the offseason.

Asked if the shoulder injury could keep him out next week, Boyd replied, "Oh, no. Even if it is [hurting], I'm still playing."

The Razorbacks were very complimentary of Kentucky skill player Lynn Bowden, who went the distance at quarterback and accounted for 274 total yards and three touchdowns.

"He just made the right plays at the right moment," linebacker De'Jon Harris said. "He's a great athlete and a hell of player. We knew what was going to be expected with him at quarterback, we just didn't stop him when it was needed."

Bowden's package was limited from a passing standpoint -- hence a 53-13 disparity in run to pass calls -- but his run plays varied from lead plays to options to draws at pretty much every gap across the line.

Senior Connor Limpert added two more field goals to his ledger, giving him 37 for his career and tying him with Alex Tejada for seventh on Arkansas' all-time list.

Kentucky's rushing numbers kept improving as the game went on against an Arkansas defense that stayed on the surface at Kroger Field more than 37 minutes.

Kentucky's 330 rushing yards was its highest total at home since a 341-yard performance against Vanderbilt in 2010.

"The backs were very unselfish," Kentucky Coach Mark Stoops said. "They blocked hard on the perimeter and they ran the ball hard. ... The offensive coaches had some good things in there and some unique plays and it really stood out tonight, and it put our guys in a good situation defensively."

"I thought we stopped him early pretty well," Arkansas linebacker Bumper Pool said. "As the game went on, we had breakdowns here and there. We've just got to get off the field on third down. I think that hurt us."

Kentucky improved its lead in the all-time series with Arkansas to 5-3. The Wildcats are 3-1 at home against the Hogs. The lone loss was an epic 71-63 seven-overtime game in 2003, a game that played large in the legacy of former Kentucky quarterback Jared Lorenzen, who was memorialized at the game Saturday.

Players of the game

Boyd, a junior from Stratford, Texas, broke off a 74-yard touchdown run on the second snap of the game, and finished with a career-high 134 rushing yards on 15 carries.

Harris, a senior from Harvey, La., had 10 tackles, second on the team behind Joe Foucha, including a tackle for loss and recovered a fumble for the second consecutive game.