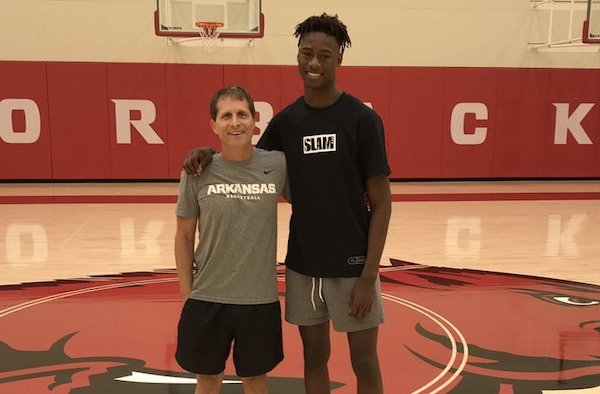 Highly regarded junior shooting guard Jaxson Robinson is expected to make his second unofficial visit to Arkansas in about two months when he and his parents visit on Saturday.

He’s looking to spend time with the coaching staff and build on those relationships.

Robinson, 6-6, 170 pounds, of Ada, Okla., has scholarship offers from Arkansas, Oklahoma, Oklahoma State, Houston, Baylor, Wake Forest and others. He called his last visit to Fayetteville in August "insane."

He said he and his parents were shocked by their trip to Arkansas.

“They couldn’t believe what they had seen either because we obviously weren’t expecting that much out of Arkansas and we got a lot and it surprised them also,” Robinson said.

Robinson was one of three standouts for Oklahoma-based 16-under Team Griffin squad with offers from the Razorbacks along with junior guard Trey Alexander and center Daimion Collins.

The biggest surprise of the first Arkansas visit?

“Probably the facilities and how nice the campus was,” Robinson said.

Robinson and associate head coach Chris Crutchfield have known one another for several years. Like Robinson, Crutchfield’s son, Josh, played for Team Griffin, which allowed the two families to develop a tight bond.

With his relationship with Crutchfield is strong. Robinson is looking forward to having the same with coach Eric Musselman and other staff members.

ESPN rates him a 4-star recruit, the No. 8 shooting guard and No. 48 overall prospect in the nation for the 2021 class. Robinson said Arkansas coaches gave him a rundown of life as a Razorback.

“When I first went I think we had like an hour-long discussion with all the coaches. We had a meeting and they showed where I might fit into their program, and it was really good,” he said.