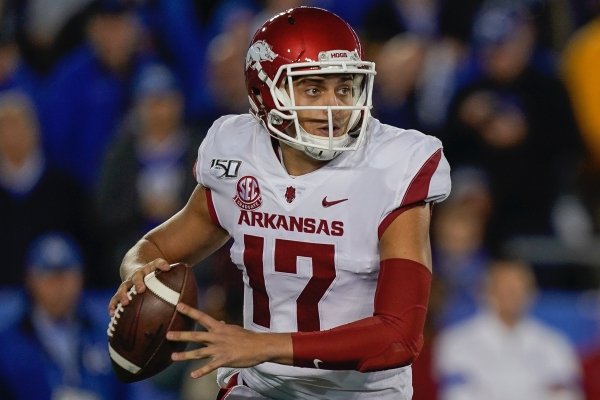 Each week throughout the 2019 season I plan to re-watch the previous week's game and chart each pass thrown by an Arkansas quarterback:

Passes broken up: 1 (intended for O’Grady 9 yards downfield in the end zone)

Throwaways: 1 (final pass, which was 16+ yards downfield with Woods in the area)

Analysis: Nick Starkel was largely ineffective in his first game back from a left arm injury in Arkansas' loss to Texas A&M in Week 5, but his play, according to Chad Morris, had nothing to do with his health. Aside from the San Jose State game, the junior was as inaccurate as we've seen him this season. I charted five inaccurate passes and two others that could have been intercepted. At the beginning of the season when starter Ben Hicks was struggling, Starkel was inserted to provide the offense with a spark, particularly with the vertical passing game. In his last three games, however, Starkel is 3 of 16 passing on throws 16-plus yards downfield and 6 of 14 when targeting receivers 11-15 yards at depth. Combine those numbers with his inability to hit the layup throws, as SEC Network analyst Jordan Rodgers put it, and Arkansas was left with no choice but to pull Starkel in favor of Hicks in the second half last weekend. He was 2 of 11 for just 21 yards on passes six-plus yards downfield at Kentucky. That won't cut it. Rodgers also brought up flaws in Starkel's footwork, which led to him regularly missing and throwing behind his receivers. And with that performance, the Razorbacks' quarterback competition is open once again.

Inaccurate passes: 1 (incomplete to Woods on 2nd down in red zone on final drive, pass well behind Woods on a slant)

Passes broken up/tipped at line: 1 (final throw on 4th down intended for Burks near the goal line)

Analysis: For the second consecutive game, Ben Hicks entered in place of Nick Starkel and played admirably, leading the Razorbacks to within 20 yards of game-winning touchdowns against Texas A&M and Kentucky. Arkansas, though, came up short in both instances. Hicks began his relief appearance Saturday a bit shaky. His first pass was interceptable. Hicks attempted to hit Trey Knox 11 yards downfield on a play in which he scrambled to his right and away from pressure before firing the pass late. After that, I charted him with five consecutive accurate balls leading up to 2nd down on the final drive. His one inaccurate pass was intended for Mike Woods in the red zone, and he threw behind the sophomore. He then had his last-chance attempt on 4th down tipped at the line as he was being pressured by right guard Ricky Stromberg's assignment. Hicks, overall, made a few big throws, including a first-down strike to Tyson Morris on 3rd and 2, and two completions to Cheyenne O'Grady that netted 37 yards on the final series. I also liked how he navigated the pocket. The most impressive sequence for Hicks was on the first-down throw to Morris. He smoothly sidestepped Kentucky linebacker Kash Daniels, who was blitzing on the play, and kept his eyes downfield, locking in on Morris on a critical down. Hicks also scrambled for a big first down in the loss. He's shown the ability to do that in recent weeks, and that's a plus - and a must at times behind Arkansas' offensive line. I would not be surprised at all to see Hicks get the starting nod against Auburn. He has simply been the better and safer option at quarterback since the Colorado State game.