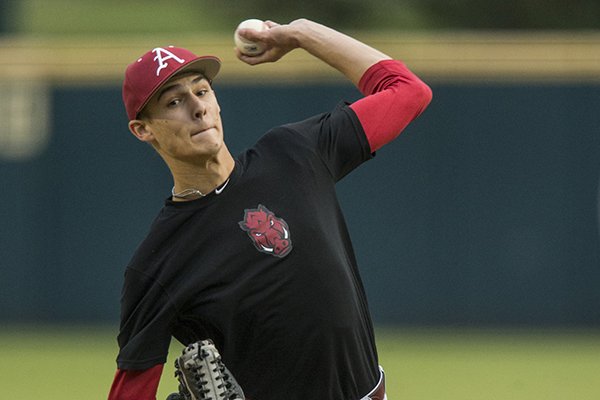 FAYETTEVILLE — In 2020, Arkansas will once again have to replace several innings of relief from the year before.

Last season, pitchers like Jacob Kostyshock and Cody Scroggins filled those relief roles well, but both were juniors who were selected on the second day of the MLB Draft and signed professional contracts following the season.

Based on the fall, one candidate who could earn a jump in innings next season is Caden Monke, a sophomore left hander who pitched 3 innings over 6 appearances and had an ERA of 18.00 as a freshman.

Playing summer baseball for the Santa Barbara Foresters in California, Monke focused on his fastball and improved throwing the pitch, albeit against lower-caliber competition. In 11 ⅔ innings he struck out 12 and walked 7, and had a 3.09 ERA in California.

Monke has continued to develop well since the Razorbacks began fall practice last month. He was the only pitcher other than returning starters Patrick Wicklander and Connor Noland to throw two innings in each of Arkansas’ exhibition games against Oklahoma and Oklahoma State.

Against the Sooners on Sept. 20, Monke struck out three batters and drew praise from Arkansas coach Dave Van Horn.

“He’s a lot better pitcher than he was last year,” Van Horn said.

Monke threw two more innings against Oklahoma State last weekend. He retired the first four batters he faced - two by strikeout - before allowing a home run by OSU’s Jake Thompson to tie the scrimmage 2-2 in the 12th inning. On most days Thompson’s homer would have been a fly out to left field, but it rode a strong wind and left the ballpark.

That home run did little to deter from Monke's fall.

"You could argue he's had the best fall of anybody," Arkansas pitching coach Matt Hobbs said. "He has worked out hard with our strength coach. He's really put an emphasis on that, and then developing some better fastball command, which he worked on over the summer. And since we got back this fall it is something that he's really been working on, and it shows. He can throw his fastball for strikes now, whereas last year that was something we really harped on."

Monke is listed at 6-3, 160 pounds. Hobbs said he has added significant power and could add some more weight before the season begins.

"He has put on more weight, even though it doesn't look like it," Hobbs said. "It's kind of like Kostyshock last year, where he looked real skinny but he was strong and could generate a lot of power on the mound. Every metric that we test is better for him.

"You look at guys like Caden Monke, where they were a year ago and where they are now, and it's pretty impressive."

Regardless where Heston Kjerstad starts in the field next season, a loud bat will remain constant for the junior power hitter.

Kjerstad worked out at first base for much of the fall after playing corner outfield positions as a freshman and sophomore. Van Horn said early in the fall that Kjerstad was picking up the position well and him playing there could open up a spot in a crowded outfield.

He was errorless in Arkansas’ two exhibition games. He was initially credited an error during the OSU exhibition on a hot shot to first base, but it was later changed to a single.

There was no room for interpretation on Kjerstad’s hits at OSU, all ropes into the outfield. He was 3-for-6 against the Cowboys and also drew a walk.

"You can see why Kjerstad is a strong candidate to be a high draft choice," Oklahoma State coach Josh Holliday said. "He's going to get three good swings off every at-bat. He's not going to get cheated and he's not going to make it easy on you. You have to earn it and you're going to hold your breath each time he swings. There is some strong intent about the way he approaches the ball, and he's really strong.

"Watching batting practice, he was blasting balls out of here at a really high level. He's a real threat, there's no doubt about it."

Kjerstad spent the summer playing for the USA Collegiate National Team. He batted .395, slugged .651 and had a .426 on-base percentage in 12 games for Team USA.

Van Horn said Kjerstad has had a good fall, just like he did as a freshman and a sophomore.

"Even when he doesn't feel like he's squaring the ball up good he still finds ways to get singles and punch in one here and there," Van Horn said. "That's always good to see."

One of the more intriguing position battles of the fall was for a backup position.

Freshmen Dominic Tamez and Cason Tollett will back up Casey Opitz in 2020. Both played in the exhibition game at OSU and Van Horn said both should play in the upcoming season.

“They've both done a pretty good job,” Van Horn said following the scrimmage. “I think Tamez early kind of had the advantage. I think if you look at today Tollett had a pretty good day back there. I think they've both gained a lot of experience. Opitz is still the guy and...they're going to get a chance to learn from him.”

Tamez showed a stronger arm behind the plate, but struggled at times with his release and accuracy on throws to second base. He also has shown power at the plate, including a home run off Connor Noland during the first intrasquad scrimmage of the fall.

“Tamez is going to be able to help us offensively,” Van Horn said. “He's actually a little better receiver than I thought he would be coming out of high school. He's got a really strong arm.”

Hobbs called Tollett a “calming presence” for pitchers. Tollett has also shown potential at the plate, including a two-out RBI single at OSU.

“He's really even keeled and does a really good job blocking and also a pretty good job receiving,” Hobbs said.

Because it has a number of position players injured, Arkansas is not playing its annual Red-White series to close fall practice.

The Razorbacks will go through one more practice Friday. Van Horn said practices this week are situational.

"We're going to set up situations with offense on bases and let pitchers try to get out of jams," Van Horn said. "That's just to get a few more swings, but really to get some of these young pitchers more time on the mound."

Van Horn said he expects Martin to be able to swing a bat by December. Martin had surgery last week to remove a broken hamate bone from his left hand. It is the same injury that Andrew Benintendi suffered prior to his freshman season with the Razorbacks in 2014.

"It's an injury you see a lot in baseball with hitters," Van Horn said. "The knob of the bat digs into that hand a little bit. (Martin) broke the tip of that off so he had it removed."

Goodheart underwent labrum surgery this summer and is expected to be able to play near the beginning of next season. Webb, who could play second base or in the outfield, suffered a hairline fracture in his shoulder while diving for a ball during practice last month, Van Horn said, but is recovering well.

"This is the time of year...where guys are starting to fade a little bit," Van Horn said. "The younger guys are tired and the older guys have had enough, and it's time to recharge our batteries, get strong and we've got to get these guys healed up."

Arkansas has yet to release its 2020 schedule, but several games have been learned through schedule releases elsewhere.

Notably, the Razorbacks' five home SEC series will be against Alabama on March 20-22, Florida on April 3-5, Texas A&M on April 10-12, Auburn on April 24-26 and Georgia on May 8-10, according to schedule releases from the other teams.

Arkansas is scheduled to open SEC play at Mississippi State on March 13-15, and play at Ole Miss on March 27-29 and LSU on April 17-19, according to their schedule releases. Based on the SEC's scheduling rotation, the Razorbacks will also play road series at South Carolina and Tennessee on dates to be announced.

Nonconference dates that have have been released include games against Oklahoma on Feb. 28, Texas on Feb. 29 and Baylor on March 1 at the Shriners Hospitals for Children College Classic in Houston; April 14 against Missouri State in Fayetteville; and two games on April 21-22 at Michigan State in the first half of a home-and-home series that is scheduled to be returned the following year.

Van Horn has previously said the Razorbacks will also play at Oklahoma next season, but a date for that game has not been released.