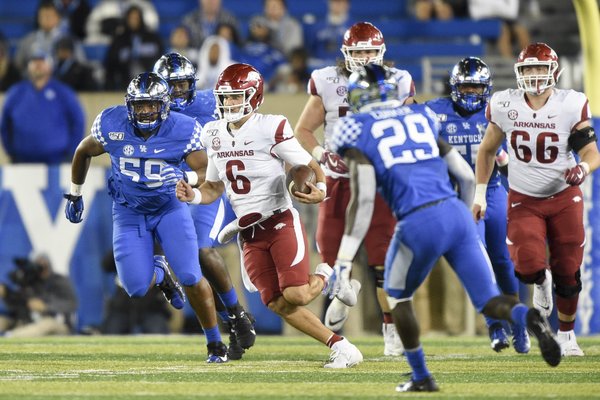 Arkansas practiced outdoors under a sunny sky Wednesday. Here are a few notes from the 20-minute viewing period:

• Once again Arkansas did not do a thud period, so there are no depth chart items to report. Chad Morris said before practice that he hasn't named a starting quarterback and he probably isn't going to "until the end." He also said that they need consistency at the quarterback position and he wants each guy to practice like the starter.

• Senior left tackle Colton Jackson was full-go again today. Sophomore safety Joe Foucha, who was in a green, no-contact jersey yesterday, was wearing the normal white jersey today. Rakeem Boyd was still in green today. I didn't see him in any noticeable pain today, but he only ran routes for about five minutes before all of the running backs broke away and worked on running back specific drills.

• The offensive line was working on double teams today. That could be because they are going up against one of the best interior defensive lineman in the conference. Senior Derrick Brown could be a top five draft pick come April. Brown had a strip sack of Florida quarterback Kyle Trask two weeks ago and returned another fumble for 48 yards during the same game.

• Junior quarterback Jack Lindsey led the scout team offense in shell work against the defense. Every other quarterback stayed with the quarterback group and threw to receivers.

• I watched Nick Starkel for a few minutes today. While I was watching him, his throws seemed to be on time and have a little bit more pace on them than they did yesterday. Morris said he asked Starkel when he came off the sideline last Saturday if he was OK, to which Starkel replied, “I don't know.” Starkel is nearly three weeks removed from the arm injury he suffered vs. Texas A&M.

• Morris said his teams have been in this situation before. He compared it to the 2016 season at SMU, when the Mustangs started the season 2-4 and had just come off a close loss to Tulsa. After the Tulsa loss the Mustangs beat No. 11 Houston at home the following week.