SEC FOOTBALL NO. 11 AUBURN AT ARKANSAS:

Auburn receiver from Little Rock refuses to give up 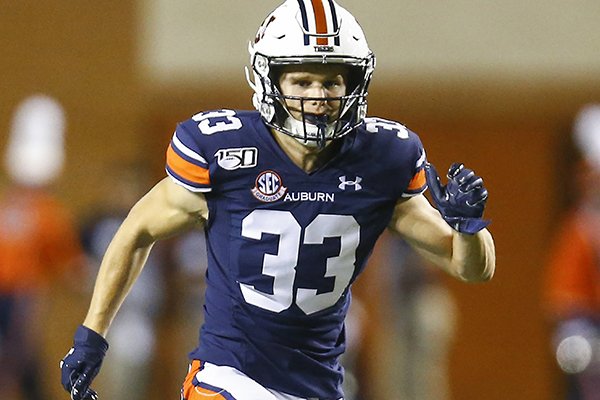 Auburn wide receiver Will Hastings (33) runs his route during the first half of an NCAA college football game against Kent State, Saturday, Sept. 14, 2019, in Auburn, Ala. (AP Photo/Butch Dill)

In the spring of 2017 after Will Hastings' sophomore season at Auburn, he ran a timed 40-yard dash.

"After I ran, everybody was kind of like, 'Oooh,' " Hastings said this week. "I was like, 'Oh no, I must have run slow.' Because it didn't feel that fast."

Will Hastings at a glance

NOTEWORTHY Former walk-on kicker who is now a starting receiver and on scholarship … Has 47 career catches for 785 yards and 6 touchdowns … This season has 10 catches for 162 yards and 1 touchdown … Redshirted last season because of knee injuries … Earned degree in business administration at Auburn in the spring … Parents are Kim and Scott Hastings … Engaged to Gracie Henley … Had 2,040 receiving yards as a senior at Pulaski Academy.

Hastings noticed some of his teammates were holding up four fingers on one hand and two on the other, as in 4.2 seconds.

"I was like, 'There's no way. They're messing with me,' " Hastings said. "I don't know where that came from, but it was awesome to do it."

"It was pretty crazy," said Hastings, who ran an electronic-timed 4.46 in high school. "It definitely hit me by surprise. We do a ton of speed drills at Auburn, so I really think that had a lot to do with it."

Hastings, a senior who is now 5-10 and 174 pounds, used that speed to go from being a walk-on kicker to a starting scholarship receiver.

But when Hastings twice had to undergo surgery last year for a torn anterior cruciate ligament in his left knee, he wondered if his playing career might be over.

"My game is based on my ability to cut and my speed," Hastings said he thought to himself. "If I don't have that, then it's going to be tough."

Hastings tore the ligament during a spring scrimmage, then again last season against LSU.

"During my second rehab, I remember thinking, 'Man this could be it for me,' " he said. "I had some bad moments."

A phone call from his father Scott Hastings -- not the former University of Arkansas basketball player -- helped Hastings decide that he wanted to keep playing football.

"My dad told me not to give up," Hastings said. "He said, 'You're going to come back better than ever. I know you're upset right now, but whatever happens, there's a plan. Don't worry.'

A year later, Hastings said he's back to full speed, which he'll show when No. 11 Auburn plays Arkansas on Saturday at Reynolds Razorback Stadium.

"My knee feels really good overall," he said. "I don't really think about it anymore."

"Will's had a very solid season," Auburn Coach Gus Malzahn said. "He's stayed healthy. I think he's in a real good spot moving forward the second half of the season to make plays for us."

Hastings had 2,040 receiving yards as a senior at Pulaski Academy, but he wasn't heavily recruited. He said schools that showed the most interest were NCAA Division II's Henderson State, Ouachita Baptist and Southern Arkansas.

"In the world of Division I football, especially the SEC, they don't even look at the little guys much," Kelley said. "But Will obviously had big-time skills.

"He's fast, he's quick, he can catch the ball. It was just a matter of somebody giving him a chance."

Auburn gave Hastings a chance as a walk-on kicker. He kicked off as a junior and senior at Pulaski Academy, normally onsides as that is Kelley's strategy.

As an Auburn freshman in 2015, Hastings tried two onside kicks -- against LSU and Mississippi State -- and neither worked. His second attempt went out of bounds.

"After the Mississippi State game, Coach Malzahn pretty much fired me as a kicker," Hastings said.

Hastings got a new job during spring practice in 2016 when Auburn was short of receivers.

Kodi Burns, a former Fort Smith Northside standout who played quarterback and receiver at Auburn, had just been hired from Arizona State to be the Tigers' receivers coach.

"Coach Burns told me we'd ran out of bodies at receiver and asked me if I'd play there," Hastings said. "He said, 'I just want you to give it a shot.' Then things went on from there."

Hastings had 11 catches for 98 yards as a sophomore, including a touchdown against Arkansas State University. In 2017, he had 26 catches for 525 yards and 4 touchdowns.

"I love Coach Burns," Hastings said. "He gave me a chance and believed in me when I didn't even believe in myself. The fact he put his trust in a walk-on kicker means the world to me."

Hastings' career totals in 35 games include 47 receptions for 785 yards and 6 touchdowns.

"I would say it's definitely been quite the journey," Hastings said. "It's been fun, it's been exciting. It's been challenging as well.

"I'm just thankful the Lord has put me in position to be here and do this. I love Auburn with all my heart. It's a special place to me, and always will be now."

Hastings will play in his home state against the Razorbacks for the second time. In 2017, he had a 22-yard catch in the Tigers' 52-20 victory.

"It definitely means a lot to play back home," Hastings said. "It's always special. It'll be cool to play in front of a lot of family and friends."

Hastings also will be playing against a close friend in Arkansas sophomore linebacker Hayden Henry, a teammate at Pulaski Academy.

"Hayden was a freshman when I was a senior, but after the junior high season was over, those guys all moved up to the varsity for the last few games," Hastings said. "I took him under my wing and got to know him really well. He's a great kid."

Hastings said he Henry have talked about the Arkansas-Auburn game.

"I've been messing with him, asking, 'What defense are y'all going to run?' " Hastings said. "He said,' Oh, I'm going to smack you.' Then we both started laughing.

"I said, 'You can tackle me hard all you want, but stay away from the knees.' "

"When Will comes back, he has no ego, no big head," Kelley said. "He's just the same great kid he's always been. He's gotten older, but his face really hasn't changed."

"He looks like he's about 13 years old," Malzahn said. "If you ever see him, you wouldn't think he's an SEC player.

"But last year, not having him, it really hurt us. Will can get open versus anybody covering him in a man-to-man situation. I think he'll have a chance to play in the NFL."

Hastings, who graduated in the spring with a degree in business administration, said he'd love to get an opportunity with an NFL team.

"That'd be big, especially for someone like me who was a walk-on," Hasting said. "I hope that's in my cards, that someone in the NFL gives me a shot just like Auburn gave me a shot. I won't let them down."