Friends to meet up again for UA visit 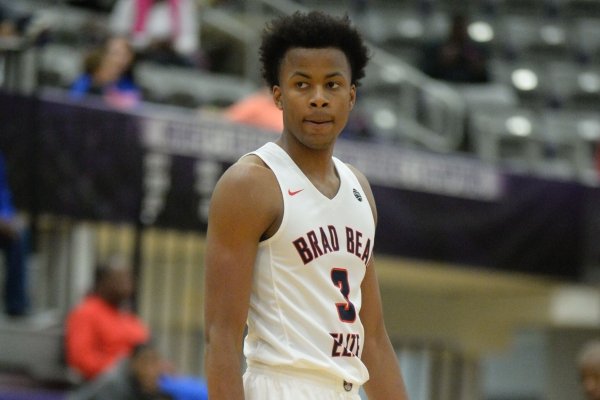 Two lifelong friends and University of Arkansas guard targets Moses Moody and Khalen Robinson have expressed interest in playing together in college.

"Yeah, we definitely talk about it as a possibility," Moody said.

The Hogs will host the pair for official visits this weekend.

"We played sometimes when we were in the third grade, but we started playing together in the sixth grade," Moody said. "We played together with the Arkansas Hawks. We've been together for awhile."

Moody, 6-6, 190 pounds, played at North Little Rock as a sophomore before transferring to Montverde Academy in Florida as a junior.

He narrowed his list of scholarship offers down to Arkansas, Southern California, Michigan, Ohio State, Oregon, Florida and Kansas in late August.

Moody officially visited Ohio State and Michigan prior to his trip to Fayetteville. He made an unofficial visit to Arkansas on June 30, his first trip since Coach Eric Musselman was hired.

"I think it really comes from playing together so long," Moody said of the friendship. "That's probably one of my favorite guys to play with in the country. Playing together since a young age. We did a lot of winning together. When we were together in the sixth grade, we won the state championship and we went and played in the nationals. ... We really bonded quick on and off the court."

Robinson, 6-1, 170, played at Bryant until deciding to transfer to Oak Hill Academy in Virginia for his senior year.

He also narrowed his list of schools in late August to Arkansas, Kansas, Illinois, Iowa State, TCU, Texas A&M and Vanderbilt. His relationship with Moody has grown strong over the years.

"We've built a bond and have tried to keep playing with each other, but never could work it out," Robinson said.

He made his lone visit to Arkansas under Musselman's leadership on Aug. 24. This weekend's trip will be about relationships and the vibe he gets from Fayetteville.

ESPN rates Robinson a 4-star prospect, the No. 19 point guard and No. 90 overall prospect for the 2020 class. He has officially visited Kansas, TCU and Illinois before Arkansas. He's doesn't have a firm date to announce a decision.

"I want to see the differences," said Moody of Musselman's program. "I want to get a better understanding and see what they have going on there with my own eyes."

While he was unable to attend, Moody's parents, Kareem and Rona attended the Hogs' Red-White game Oct. 5. Because Moody's and Robinson's flights leave early Sunday morning, they'll be unable to see Arkansas' exhibition game against the University of Arkansas at Little Rock on Sunday afternoon. Moody's parents plan to attend the game.

"They've been doing a good job recruiting me," Moody said of Musselman and his staff. "All the coaches up there have. They've been making their way to Florida whenever they can. They've been keeping contact, talking and calling and texting me."

Moody is open to new opportunities, but Arkansas, Michigan, Kansas and Oregon are schools he's focused on while recently drawing interest from Virginia.

"Virginia has come into the conversation, and I really need to assess that more before I necessarily put them all the way in," Moody said.

As of now, Moody doesn't have other visits set. He's uncertain if he'll sign in the early signing period in November or in the spring.