Neighbors likes what he sees by Musselman's practice 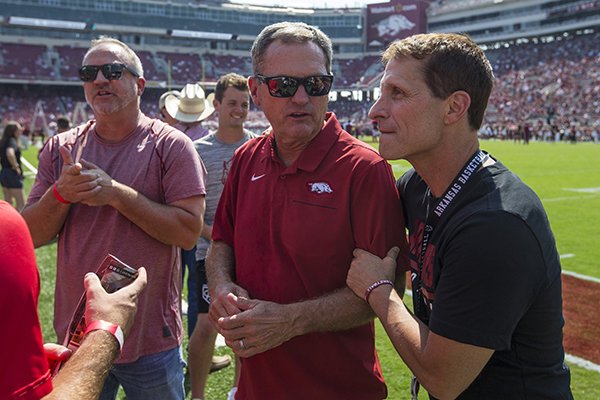 “I’ve never seen more activity at a basketball practice, and I’ve been to a bunch,” Neighbors said. “It is productivity and activity meeting right up in the middle.

“It’s almost like station work at times. He’s got a pod of people working over here, and a pod here and a pod there.”

Neighbors said the managers are working as hard as the players.

“If a drop of water hits that floor, there’s like five guys diving on it with a towel,” Neighbors said. “It’s all orchestrated.

“His practice schedule looks like a cheat sheet I used to get to legally use in geography class, where you could write so many notes on that one page. I think it’s a mix of his professional career as a coach and his college career coming together.”

Neighbors said that including players, he counted 53 people who either were on the court or close to it at a recent practice.

“You’ve got players and managers and coaches, and they’re all doing something,” he said. “They’re charting, they’re encouraging, they’re rebounding.

“It’s intriguing to watch. His guys are playing really hard and they’re really into it.”

Danberry back at MSU

Mississippi State Coach Vic Schaefer had been talking with Jordan Danberry a couple of times a week to see how she was doing while waiting to hear if the NCAA would grant her a fifth season of eligibility.

So Danberry didn’t think anything was up when Schaefer called her in August and asked her to stop by his office.

“And I was like, ‘Yeah, of course I do.’ He said, ‘Well, you got it.’ Then the whole coaching staff started ringing cowbells and cheering.”

The NCAA ruled Danberry, a 5-8 guard from Conway, deserved to have another season with the Bulldogs after she played in six games at the University of Arkansas as a sophomore during the 2016-17 season before transferring to Mississippi State.

“I think we were both in tears,” said Schaefer, a former Razorbacks assistant coach. “It was a special day for us. It’s exciting to have Jordan back.”

“I think my all-around game is really focused on playmaking, whether it’s making a play on defense or on offense or making a pass or a shot or getting a steal or a rebound,” Danberry said. “My energy all over the court is a good asset to have.”

Danberry is the only senior for the Bulldogs, whose roster includes four freshmen and four sophomores.

“It means a lot to me to be able to get out there on the court again,” she said. “I’m just glad I get to lead this young group.”

“I’m expecting a lot from her,” he said. “She’s someone that’s grown so much. She understands what it takes to win and that you have to pay a price for success.

“What she’s done in practice, setting a standard for our freshmen to see every day, you can’t put a price on it. She’s a kid that goes hard every day, all day. She’s going to have a tremendous season.”

Schaefer said it was a disappointment Danberry wasn’t included on the 10-player All-SEC first and second teams that were voted on by the media.

“Jordan’s not one of the 10 best players in our conference?” Schafer said. “You’ve got to be kidding me. She’s a player that’s really hard for the opposing team to deal with, and it’s her competitiveness as much as her skill set.”

Danberry, who graduated from Mississippi State last year with a degree in business economics, is set to complete her master’s in business administration this spring.

“I think it was definitely a great decision transferring to Mississippi State,” she said. “My grades turned out, and I was able to graduate. We’ve also had a lot of success on the court.”

“I’ve played in that gym before, so it wasn’t really like an away game to me, especially having all my family there,” Danberry said. “I was playing against my former high school teammate, Alexis Tolefree. We had basically the whole city of Conway there, all our family and friends. It was like a welcome home type deal.”

While Danberry waited last summer to hear the NCAA decision on her waiver request, she attended classes at Mississippi State, worked at a credit union and continued to work out in the hopes she’d be able to play this season.

“I was optimistic, but I just continued to stay focused on my life if I wasn’t to get this season back,” Danberry said. “Because I didn’t really want to get my hopes up and be disappointed at the end.

“I was very anxious throughout the whole summer, but it worked out in the end.”

Blair not ready to retire

Texas A&M Coach Gary Blair is 74, but said he has no plans to retire.

“If you’re still enjoying yourself and can still do the job, why retire?” Blair said. “Because I have so many of my friends that are retired, going ‘Oh this is hurting, that’s hurting.’ “

Blair has a 765-312 record with 25 NCAA Tournaments going into his 35th season as a college head coach with stops at Stephen F. Austin, Arkansas and Texas A&M. He has led the Aggies to 14 consecutive NCAA Tournaments and won the 2011 national championship.

“Gary’s going to coach until he dies,” Mississippi State Coach Vic Schaefer said with a laugh. “He’s still got so much passion and energy for the game. And look, he’s really good at it by the way.”

Arkansas Coach Mike Neighbors was Blair’s director of operations with the Razorbacks.

“That age thing is just a number,” Neighbors said when asked about Blair. “He still works just as hard at his craft as anybody. When that starts to fade, it’s time to go, but if anything that’s been strengthened in him the last few years.

“I’m not planning a retirement party for him any time soon. He’s not getting a rocking chair this year when he comes to Bud Walton Arena.”

Blair said he’s learned to become a better listener to his players.

“As you get older, learn how to be a good listener to young people,” he said. “As adults — as parents or as grandparents — sometimes we’re talking instead of listening.”

“Taylah is a different type of player than she was last year,” Neighbors said. “When you have a post player winning the running tests, you know that kid worked out in the summer.

“She came back in great shape. Keep an eye on her.”

Coach Mike Neighbors said he can make a case that junior guard Chelsea Dungee, a preseason All-SEC first-team pick who averaged 20.5 points last season, is the Razorbacks’ most improved player.

“Which is pretty scary, because she was at a high level already,” he said.

“Last year we used to count sometimes how many dribbles she took in the half court, and her record was 19,” he said. “But she scored and got an and-one, so what did I care?”

Neighbors said Dungee has improved her mid-range jump shot along with her ball handing, rebounding and defense — and her shot selection as well.

“She used to get going real good, and then she’d take a heat-check shot before she got going again,” he said.

“Make two or three wide-open ones and then you come down and take a step-back, fade away from maybe outside your range,” Neighbors said. “Just to see how hot you are.”