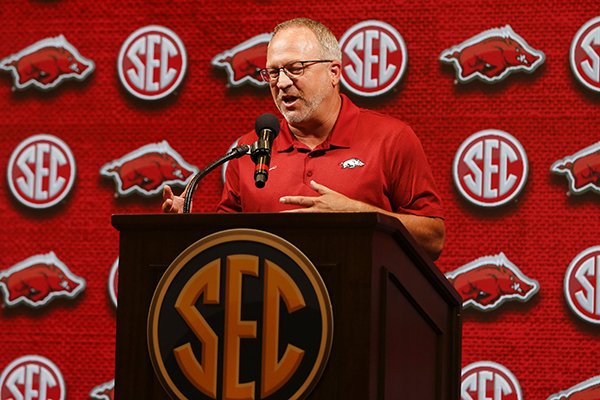 MOUNTAIN BROOK, Ala. -- The University of Arkansas women's basketball team reached the SEC Tournament championship game for the first time at the expense of Texas A&M Coach Gary Blair, who coached the Razorbacks to a 198-120 record in 10 seasons highlighted by a Final Four appearance in 1998.

Arkansas beat Texas A&M 58-51 in last year's SEC Tournament semifinals after trailing by as many as 16 points before losing to Mississippi State 101-70 in the final with the Razorbacks playing their fourth game in four days.

"They ought to fire the coach that lost the 16-point lead against Arkansas," Blair said Thursday at SEC media days in a joking reference to himself. "But we also lost to a well-coached team.

"Mike Neighbors is the real deal. He's paid his dues all the way from high school up to Arkansas."

Neighbors, who was Blair's director of operations at Arkansas, goes into his third season as the Razorbacks' coach with significantly higher expectations.

Arkansas was picked to finish fifth in the SEC in a preseason media poll after Neighbors' first two teams were 13-18 and 22-15 overall and 3-13 and 6-10 in SEC play. Two years ago the Razorbacks were picked 14th.

With six of the top seven scorers from last season returning -- led by junior guard Chelsea Dungee -- and a talented group of newcomers -- led by junior transfer guard Amber Ramirez -- the Razorbacks are projected to play in the NCAA Tournament for the first time since 2015.

"The standard definitely has been raised," said Dungee, a preseason All-SEC first-team pick who averaged 20.5 points last season. "I think we've got a lot of expectations and we've got something to prove this year."

Neighbors said he's embracing the expectations and wants his players to do the same.

"I told our kids I'm not going to say preseason rankings don't mean anything, because they do mean things," Neighbors said. "They don't mean we get the No. 5 seed at the SEC Tournament. They don't meet we get to be talked about for the NCAA Tournament.

"But they do mean we've made progress and that we've caught the attention of somebody somewhere in the media."

Mississippi State Coach Vic Schaefer, who was an Arkansas assistant with Blair when Neighbors was on the staff, said he's not surprised the Razorbacks have made so much progress so quickly.

"Mike has a great understanding that No. 1, you've got to recruit, you've got to have players," Schaefer said. "But he also understands the importance of developing players. That's what he's really, really good at.

"It's hard to build a program in the Southeastern Conference. I've been there. So what he's been able to do is very impressive."

Schaefer said Neighbors now has the roster in place to be a consistent winner in the SEC.

"You get players that fit your system and then you give them free rein to do the those things they do best, and you don't hold them back," Schaefer said. "You don't have players looking over their shoulders 'Wondering can I do that? Can I not? Do I have permission?'

Neighbors said the players who have the green light to shoot without restrictions in his fast-paced offense include Dungee, Ramirez, seniors Alexis Tolefree and Jailyn Mason (who is currently sidelined by a foot injury), sophomore Rokia Doumbia and freshmen MaKayla Daniels and Avery Hughes.

"I always try to think, 'Would I like to play for myself?' " Neighbors said of his philosophy. "It's how I wold like to have played.

"But I don't give that [freedom] to everybody. Not everybody on the team has the green light. You have to earn it, and the kids that get it have earned that trust."

Dungee said Neighbors knows how to bring out the best in the players.

"When you have that confidence from your coach and you're that comfortable, the game becomes a little bit easier," Dungee said. "It just creates a good environment."

Ramirez, a McDonald's High School All-American who averaged 10.4 points as a sophomore at TCU two years ago, said Neighbors' system is a big reason why she transferred to Arkansas.

"Coach Neighbors definitely knows what he's doing," Ramirez said. "He knows his players and what we should and shouldn't do. Everything is done correctly."

The players are excited about picked high in the SEC preseason poll, Ramirez said, but aren't letting it affect their preparations.

"We're going to do our best to fulfill those expectations, and I think we're ready to embrace the pressure," she said. "We're also staying hungry, and we're never going to get complacent."

"The goal is to make it to the NCAA Tournament, because we haven't been there in a while," Dungee said. "Then win some games in the Tournament. So I'm ready to do whatever that takes."

"I think [Neighbors] inherited a program that he couldn't put his imprint on it just right away," said South Carolina Coach Dawn Staley, whose Gamecocks won the 2017 national championship when they beat Schaefer's Bulldogs in the final. "But now he's getting players in that best fit his style of play.

"Obviously, they've done a great job. I think with the players he has coming back and the adding the ones who had been sitting out, he can compete for a conference championship this year."