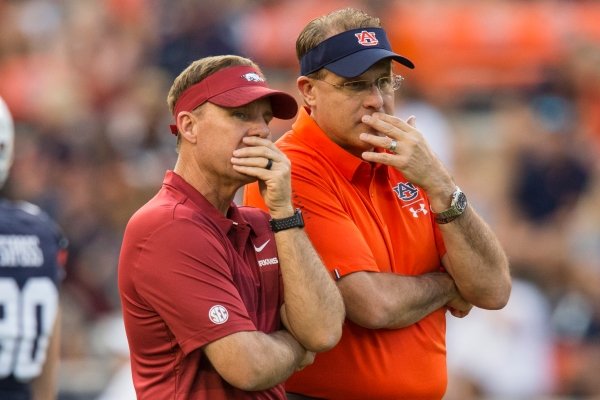 It’s a rare weekend in the SEC where all seven games are conference matchups.

The University of Arkansas hosts Auburn and then travels to Alabama next week, making the Razorbacks the only team to face those two powerhouses on consecutive weekends.

LSU has them back-to-back but with a weekend off in between.

It was my first losing weekend since these predictions started. The 3-4 record brings the season total to 50-17, and here are this week’s guesses:

Everything but home field is in the Tigers’ favor. They are coming off an open date, so everyone will be healthy and tested and coming in off a loss to Florida so they are going to get back on track. This might be Gus Malzahn’s second favorite opponent to beat, after Alabama of course. Arkansas has a dual-quarterback situation, but last week John Stephen Jones was told to be ready to play against Kentucky too. The Tigers are favored by 19 for a reason. Auburn 35-24

This once was a big game, but Nick Saban has owned so much of the Volunteers he should receive mail in Knoxville, Tenn. The Vols seem to be improving and are coming off a win over Mississippi State which might give them some hope, false hope. Some are saying Alabama doesn’t have a great running game, and why would the Tide need it with the passing attack they’ve got. And they have the runners if needed. They just haven’t been needed. Alabama 42-17

The Gamecocks are coming off a huge victory over Georgia which had three interceptions and lost a fumble. If the Gamecocks’ heads are still in the clouds, then the Gators will quickly get their attention. The Gators went into Death Valley and played LSU evenly for three quarters and then gave up three unanswered touchdowns. Don’t expect that to happen again. Florida 28-24

If the Bulldogs don’t get a better handle on wide receiver turned quarterback Lynn Bowden than Arkansas did, they could lose a second consecutive game. However, with the Bulldogs coming off a shocking upset at the hands of South Carolina they may step off the bus tackling anything that moves. Georgia is still favored to win the SEC East, but it may not be able to afford another loss. Mizzou is undefeated in SEC play and Florida has just one loss. Georgia 49-24

If the Bulldogs are going to have a chance at an upset, they are going to have to keep the Tigers off the field. On third down the Tigers are converting 55.1 percent. Tigers quarterback Joe Burrow leads the SEC in passing yards. They have a decent running attack, but it is going to come down to LSU’s SEC-leading passing attack against State’s 10th-rated passing defense. LSU 42-28

The Rebels need to win three of their final six to get bowl eligible. It has to start tomorrow at home and it could. The Aggies have three losses (should have been four) and are not anything close to what they were predicted in the preseason. The Rebels are better at home. They can control the game with their superior running attack, unfortunately they give up a ton in the air. Texas A&M 27-21

This is like a tune-up game for the Tigers, who will probably get to play every player dressed out. The Commodores lost to UNLV badly, which lost to Arkansas State badly. This game kicks off at 3 p.m., so there, you have been warned. Missouri 49-14