Auburn rebounds from first loss by running all over Arkansas 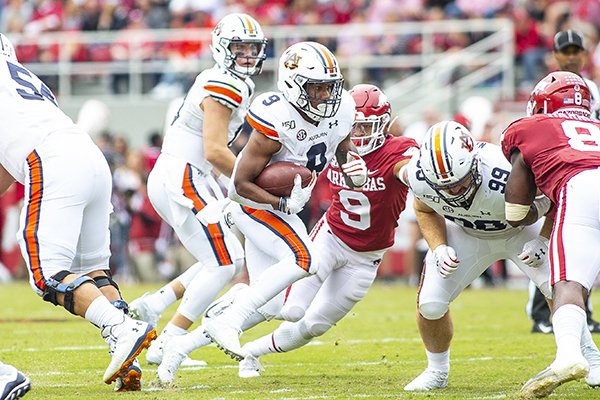 Auburn running back Kam Martin (9) carries the ball during a game against Arkansas on Saturday, Oct. 19, 2019, in Fayetteville.

FAYETTEVILLE — Auburn's Gus Malzahn is known as a wide-open offensive coach, but his system begins and ends with running the football.

Even without his leading rusher JaTarvious "Boobee" Whitlow on Saturday, the visiting No. 11 Tigers rolled up 298 yards on the ground and only allowed Arkansas to rush for 52 yards in a 51-10 rout of the Razorbacks.

“Stopping the run and running the football, it's how we win at Auburn,” Malzahn said. “Today we were able to do both. When we do that. We're a good football team.”

“We played them all today and that was by design,” Malzahn said. “You saw Harold Joiner, he's kind of got something to him, too. He's a big guy. It's good to have depth at that position and we'll probably do something similar next week" at LSU.

Offensive tackle Prince Tega Wanogho was pleased with the effort, which came after losing at Florida 24-13 and having an off week to prepare for Arkansas (2-5, 0-4).

“I think we did pretty good,” Wanogho said. “It was just a next-man mentality. The next man has got to step up and that’s what we did today.”

Auburn turned a 17-0 halftime lead into a 31-3 one late in the third quarter, and outscored the Razorbacks 20-0 in the fourth.

“I think after the first half we could see what they were doing and we just made an adjustment,” Wanogho said. “We just took it over. That is what the game is all about.”

True freshman quarterback Bo Nix was 12-of-17 for 175 yards and three touchdowns, two of which came in the third quarter to Seth Williams for 17 yards and to Anthony Schwartz for 28.

“I thought Bo did an outstanding job there in the second half,” Malzahn said. "He did a good job throwing the football. That was nice to see.

“In the second quarter we were out of rhythm. It wasn't just him, it was everything. And in the second half he really looked comfortable. I think when he hit that one to Seth, I think it opened everything up and he played really good after that.”

Nix, the son of former Auburn quarterback Patrick Nix, was happy to see the offense have a spark in the third quarter.

“It was really important,” Nix said. “We didn’t finish off the first half very well. We moved the ball, we just couldn’t score. The second half we came out and threw the ball around and it was very good.”

Arkansas quarterback Ben Hicks was stripped sacked on the home team’s first possession and Auburn jumped out to a 7-0 lead when Nix scored on a 4-yard keeper.

The lead grew to 14-0 less than five minutes into the game when Shaun Shivers scored on a 6-yard touchdown run. Anders Carlson's field goal put the visitors ahead 17-0 before the end of the first quarter.

“Our guys came out ready to play right off the bat,” Malzahn said. “Our defense played outstanding. Offensively we got off to a good start, but kind of fizzled in the second quarter. Give them credit.

“In the second half we were able to run the football. We hit a couple of explosive pass plays that kind of opened everything up.”

For the second game in a row, Auburn foiled a fake punt when Arkansas' Sam Loy threw a pass right to a Tigers defender. Auburn also sniffed out a fake at Florida two weeks ago.

“Special teams, I think we played really good,” Malzahn said. “They had the fake punt that I think our guys sniffed out again and just overall real happy with our players coming off a loss. Our guys were hungry and put the game away in the second half.”

Asked about Arkansas’ fake pass out of punt formation that fell incomplete, Malzahn noted that it was the Razorbacks just trying to make a play.

“They're trying to win the game,” Malzahn said. “A fake punt is a fake punt, you think it's going to work. We were fortunate enough to sniff it out. I think that was big.”

Auburn defensive end Marlon Davison had five tackles, with two sacks among his three tackles for lost yards. He also forced and recovered the fumble that set up his team’s first touchdown.

“Marlon is an impact player,” Malzahn said. “He's a real football player. He plays the run well and the pass well. He played very well. Impacted the game early.”

Auburn’s defensive front dominated for most of the game.

“I think they played outstanding and it starts up front,” Malzahn said. “I think their quarterback had a lot of pressure on him most of the game, having to throw off his back foot a lot.”

Malzahn was impressed with Arkansas senior tight end Cheyenne O’Grady, who had 7 catches for 72 yards, including a 45-yard touchdown catch.

“He's a real player,” Malzahn said. “One of the best offensive players in our league. He made a great play. Matter of fact he made three or four great plays. One was outstanding on the touchdown.”

He also lauded Arkansas’ defensive play in the second quarter that limited Auburn to just 36 yards.

The Razorbacks stopped the Tigers on consecutive plays on third-and-1 and fourth-and-1.

“They got after us,” Malzahn said. “They stopped us on the third-and-1. It was a stupid call to come back and call the same play, but give them credit. They were getting after it early.

“They got a little bit of momentum there in the second quarter. They were stopping the run, they were bringing extra guys off the edge and they got our offense to stall.”

Carlson drilled the team's NCAA-record 304th consecutive PAT during the game - a streak that his older brothers Cody and Daniel were part of as well. Carlson missed a PAT in the fourth quarter to snap the streak.

“It is the biggest blessing, just being a small part of a big thing going back to Cody and Daniel and all their long snappers and all their holders,” Carlson said.

It’s just the consistency of the guys before me. Auburn prides itself on consistency and our specialists do, too.

Auburn will next visit No. 2 and unbeaten LSU next Saturday, having not won in Baton Rouge for the last 20 years.

“That's a long time,” Malzahn said. “I'm going to enjoy this. I just told our guys to enjoy this. It's hard to win on the road in this league. We'll get back to Auburn and I'll flip the switch.”