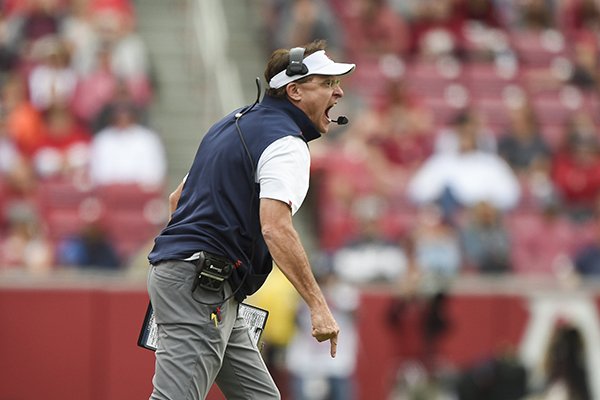 Auburn coach Gus Malzahn screams during a game against Arkansas on Saturday, Oct. 19, 2019, in Fayetteville.

FAYETTEVILLE — Gus Malzahn’s coaching legend began in Northwest Arkansas 22 years ago when his high school team at Shiloh Christian went all in on a no-huddle approach that produced points in flurries while leaving defenses gasping for air.

It was a style that changed football across the state and eventually landed Malzahn the offensive coordinator job at Arkansas in 2006. It has sustained him throughout a seven-year head coaching career at Auburn, where he has won 33 more games than he has lost.

And it has been especially successful against the Razorbacks.

Auburn defeated Arkansas 51-10 on Saturday - its fourth straight blowout in a series that had games decided by 53, 32 and 31 points the previous three seasons. Malzahn improved to 6-1 against the Razorbacks as a head coach and Arkansas has a lot of ground to make up if it ever wants to close that gap.

Auburn found success running to the outside against an Arkansas defense that has struggled to tackle on the perimeter all season. And as the Arkansas defense tired while on the field for 12:10 of the fourth quarter, the Tigers began to make big gains up the middle.

Behind arguably the best offensive line in the SEC - one comprised of five seniors - Auburn rushed for 298 yards on 51 carries, a number skewed a little because of three end-of-game kneel downs. The Tigers had 301 rushing yards before forcing a an Arkansas turnover with less than two minutes remaining, and had 491 yards of offense overall.

The Razorbacks were dominated after two consecutive four-point losses in SEC games against Texas A&M and Kentucky. Auburn was clearly a step up in class from those teams, not only along the lines, but across the board.

Facing a defensive front that Arkansas coach Chad Morris said earlier in the week was among the best he had seen, the Razorbacks could not run the ball and finished with 52 yards on 28 attempts. Arkansas was faced with a difficult decision in the run game: try up the middle against a defensive line with multiple high-round NFL draft prospects like Derrick Brown and Marlon Davidson, or to the outside against speedy linebackers and safeties.

The Razorbacks tried some of both with little success. The team’s longest run play was by Rakeem Boyd for 11 yards.

The passing game didn’t yield much more fruit for Arkansas. Starting for the first time since the Ole Miss game in Week 2, Ben Hicks completed 19 of 39 passes for 182 yards, 45 of which came on the Razorbacks’ only touchdown to C.J. O’Grady late in the third quarter. Hicks was responsible for three turnovers (two were fumbles) and was fortunate not to have a couple of more passes intercepted.

Hicks rarely had much time to throw, so his best success came on quick passes that offset the Auburn rush. The Tigers were credited with three sacks and three more hurries.

Davidson had two sacks, including one that set the tone for the game on the third play from scrimmage. Davidson got around Arkansas left tackle Colton Jackson and stripped Hicks. Auburn recovered at the Razorback 22 and scored three plays later.

The Tigers were ahead 17-0 at the end of the first quarter. Arkansas withstood the early onslaught for a while and neither team scored again before halftime.

Connor Limpert, who missed a 44-yard field goal attempt as time expired in the second quarter, was good on a 28-yard attempt in the third quarter to pull Arkansas within 17-3. But Auburn quickly took away any energy that was in the stadium by scoring twice in 22 seconds on touchdown passes from Bo Nix to Seth Williams and Anthony Schwartz, sandwiched around Hicks’ only interception.

The loss was the 15th straight for Arkansas - 11th most in SEC history. Twelve of those losses have come under Morris, whose short tenure has been a steady mix of close losses and blowouts. Morris’ team has lost five SEC games by seven points or less and five by 31 points or more.

The SEC losing streak began in 2017, but Arkansas added on to another streak that dates back even further.

The Razorbacks have lost nine straight conference games at home and haven’t won against an SEC opponent in the state of Arkansas since a 31-10 victory over Florida in November 2016. That is a span of 1,078 days.

With the outcome of a game at No. 1 Alabama next week assumed, the next chance to end both streaks is Nov. 2 when Mississippi State visits Fayetteville.