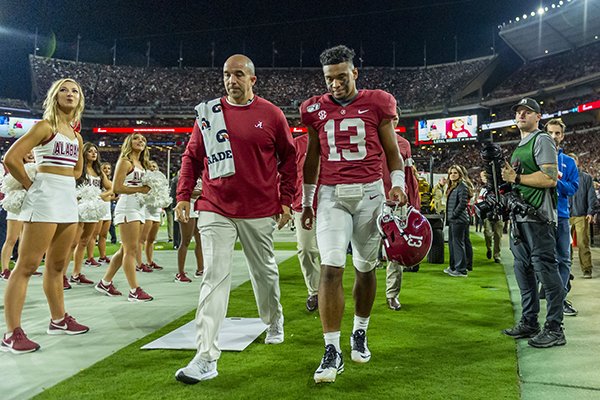 Alabama quarterback Tua Tagovailoa (13) walks off the field hurt against Tennessee during the first half of an NCAA college football game, Saturday, Oct. 19, 2019, in Tuscaloosa, Ala. (AP Photo/Vasha Hunt)

TUSCALOOSA, Ala. — With Tua Tagovailoa hurt, No. 1 Alabama turned to the defense and Najee Harris to pull out a 35-13 victory over Tennessee on Saturday night.

The Crimson Tide (7-0, 4-0 Southeastern Conference) faced its first test of the season without last season's Heisman Trophy runner-up against the five-touchdown underdogs. Both starting quarterbacks left the game before halftime, and the Volunteers (2-5, 1-3) put up a fight much of the way.

Tagovailoa, the leader of a normally high-powered offense, left with an ankle injury in the second quarter and coach Nick Saban said he is likely to miss the next game against Arkansas. He called time out before the play clock ran out after a sack.

"I didn't even know he was hurt," Saban said. "He said he felt like he twisted his ankle."

The end result was familiar: Alabama's 13th consecutive win over the rival Vols.

Trevon Diggs recovered Guarantano's fumble on fourth-and-goal from the 1 and raced 100 yards for a touchdown to end the threat. Tennessee could have cut the deficit to a touchdown, down 28-13.

"This is the first time we had to grind one out and we really had to make plays," Saban said.

Vols coach Jeremy Pruitt had some angry words for Guarantano as the quarterback walked toward the sideline, pointing his finger toward him and briefly grabbing at his facemask.

Harris was already delivering before Tagovailoa's injury. He wound up running for 105 yards and two touchdowns and adding 48 yards on four catches. It was the second straight 100-yard game for a playmaker often overshadowed by Tagovailoa and the passing game.

Alabama got a cushion when reserve wide receiver Slade Bolden threw a 6-yard touchdown pass to a wide-open Miller Forristall in the end zone with 4:55 in the third. Bolden did a celebratory dance toward the sideline, where he was swarmed by teammates.

It was a needed pick-me-up with the Vols riding momentum and having cut it to 21-13 with a field goal. The defense then made a stop with Terrell Lewis sacking Guarantano on third down.

Tagovailoa finished 11-of-12 passing for 155 yards but also threw an interception on first-and-goal from the 2 when he scrambled around and forced the ball. Backup Mac Jones passed for 72 yards and is expected to get his first start.

COLUMBIA, S.C. — Kyle Trask threw a career-high four touchdown passes, three in the fourth quarter, to help Florida bounce back from its loss at LSU.

The Gators (7-1, 4-1 Southeastern Conference) slogged through a soggy field from Tropical Storm Nestor for much of the game. The rallied past a South Carolina (3-4, 2-3) team looking to take down a Top 10 opponent for the second straight week after its 20-17 double-overtime win at Georgia. Instead, it was Florida, off its 42-28 defeat at LSU, that kept making plays on the way to its best start since 2015.

In the final period, down 20-17, Trask faced fourth-and-3 on South Carolina's 34 before scrambling from pressure to pick up the first down with a 9-yard pass to Kyle Pitts. Trask followed with the go-ahead 25-yard touchdown throw to Lamical Perine.

Florida's defense came through down the stretch, too, after the Gators took the lead. Defensive end Zachary Carter sacked Ryan Hilinski, who fumbled as nose tackle Kyree Campbell recovered.

NASHVILLE, Tenn. — Riley Neal came off the bench and threw a 21-yard touchdown to Cam Johnson with 8:57 left, and Vanderbilt upset Missouri with a stifling defensive performance.

Ke'Shawn Vaughn ran for a touchdown and also took a screen 61 yards for another score as Vanderbilt (2-5, 1-3 Southeastern Conference) snapped a three-game skid to Missouri after losing five of the previous seven.

The Commodores sacked Kelly Bryant three times, and Allan George intercepted Bryant's pass in the end zone with 6:44 left in the third quarter.

Missouri (5-2, 2-1) had a chance to tie, but Vanderbilt sacked Bryant for the third time, and Tucker McCann pulled a 48-yarder wide left for his second missed field goal. Vanderbilt ran out the final 6 minutes.

Mississippi State (3-4, 1-3) sacked Burrows three times and regularly confounded the Tigers on third down, but LSU managed to score points on every drive of the first half and led 22-7 at the break. A pair of third-quarter touchdowns sealed the win.

Mississippi State freshman Garrett Shrader threw for 238 yards and a touchdown with two interceptions. He also rushed for 66 yards and another touchdown.

Swift, who ran for 179 yards, added a 3-yard touchdown run in the fourth quarter. Brian Herrien ran for 60 yards, including an 8-yard scoring run.

Georgia (6-1, 3-1 Southeastern Conference) recovered from last week's loss to South Carolina by finally taking advantage of its SEC-leading ground game in the second half.

Each offense was affected by Nestor, the former tropical storm which dumped rain on Athens throughout the day. The wet conditions contributed to the scoreless first half.

Kentucky (3-4, 1-4) got 99 yards rushing from Lynn Bowden in his second start at quarterback.