State of the Hogs: Auburn dominated at the line of scrimmage 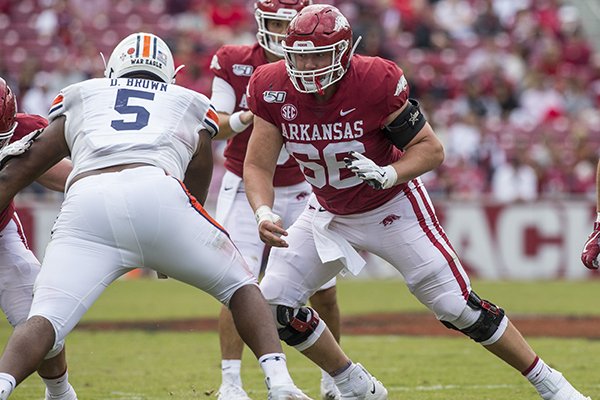 FAYETTEVILLE — The fashion experts have said for years that wearing all white makes you look bigger.

But it was not a distorting color that made Auburn look like the much bigger and more physical beast in a 51-10 victory over Arkansas. It was the 15th straight SEC football loss for the Razorbacks.

None of it was a surprise. The No. 11 Tigers were favored by 19 points.

Juniors and seniors with vast experience man the Auburn lines on both sides of the ball. The SEC is a line of scrimmage league. Never has it been more apparent that the Hogs are lacking in just that area.

Arkansas coach Chad Morris said afterward, “We knew they were very big and physical up front.”

The Tigers – as fast as they are big and physical – rolled to a 14-0 lead in the game’s first four possessions, led 17-0 after the first quarter and survived a mild push by the Razorbacks just before and after intermission.

“We played hard, but we took two haymakers at the start,” Morris said. “We talk all the time, you can’t give good teams help.”

The Hogs committed four turnovers. They made only 14 first downs, three by penalty. They rushed for just 52 yards and made only four first downs on the ground.

The Tigers were coming off an open date, following their only loss, to Florida, 24-13. They were sharp, rolling to a 491 to 234 edge in total offense. They committed just one turnover and drew just five penalties.

The second quarter was scoreless with Arkansas kicker Connor Limpert missing from 44 yards on the final play of the half. The Hogs got a three-and-out to start the third quarter, then marched 77 yards in 16 plays for Limpert’s 28-yard field goal.

It would be the only red zone opportunity of the day. The fact that the Hogs still lack red zone punch – settling for the field goal – probably doomed them as much this time as similar red zone failures cost them in their previous two losses.

If there was any hope of a Homecoming rally in front of the standouts from the the 1969 and 1989 Razorbacks and newly-elected Hall of Famer Darren McFadden, they were quickly dashed by Auburn quarterback Bo Nix.

The Tigers – just as they did to open the game – scored two touchdowns quickly to go ahead 31-3. Nix found Seth Williams for 48 yards, then Anthony Schwartz for 28. Those two scores were sandwiched a Ben Hicks interception.

The Hogs did not go away entirely. There were back-to-back plays to end the third quarter that provided the only other points for the hosts.

De’Jon Harris knocked the ball from Nix on a scramble. Bumper Pool kept it in bounds and McTelvin Agim covered it for the Hogs.

Hicks made the Tigers pay on a blitz just one play later. C.J. O’ Grady proved again that he’s a rare talent with a catch – well, two catches – on a 45-yard touchdown play with 14 seconds left.

O’Grady ran away from two Tigers, then had the ball tapped away inside the 10-yard line. He reached to his left to grab it again, never breaking stride.

That’s the kind of play it took to best the more talented Tigers. O’Grady led the Hogs with seven catches for 72 yards, but it took misdirection and lots of fakes to get him open.

Hicks, chased from the pocket and running for his life, missed him badly in the corner of the end zone on the third-and-8 play from the 10-yard line on the play before Limpert’s field goal.

Among the other highlights was a Joe Foucha blitz to blow up a fourth-and-1 Auburn gamble at the Arkansas 41.

Agim pointed to himself as the culprit on some of the missed tackles. And, some of the aggressive coaching moves fizzled. A pass on a fake punt was intercepted.

The Arkansas offensive line could create few seams for Rakeem Boyd, the other bell cow of the offense. The junior running back fought fiercely, but made only 39 yards on 13 tries.

Auburn’s 4-3 defense gave up a few runs on the perimeter, but tackle Derrick Brown (318 pounds) and end Marlon Davidson (278) both made brilliant plays in the opening Arkansas possession.

Boyd made 4 yards on a sweep to open the game. On second down, he bounced wide to the other side with Brown holding his ground for an instant. As Boyd seemed headed for clear sailing, the massing tackle chased him to the sideline for no gain. Davidson stripped the ball away from Hicks on the next play.

Arkansas defensive end Mataio Soli lost the edge on a 4-yard Nix keeper. The next touchdown was a similar play to the outside on a wide receiver sweep.

Morris went all the way with Hicks at quarterback. He said the battle between Hicks and Nick Starkel during the week was decided on the way the two handled checks and protection calls.

“We knew Ben was more comfortable with the protections,” Morris said.

On the play selection, Morris said there were a lot of run-pass options called.

“We just have got to execute better,” he said. “We’ve got to capitalize on our (downfield shots). We’ve exhausted a lot of offensive (calls). We ran a lot of RPOs today. We gotta make sure we execute them right.”

Morris was questioned about the task at hand, with more strong teams on the schedule, including a trip to No. 1 Alabama next Saturday.

“I can tell you this; the young men in the locker room are gonna stay in the fight,” Morris said. “The only thing you can do is go back to work. You keep developing and you recruit.

“I knew the league was tough. We’d played against some of these teams. But I keep saying it’s not who we play, it’s how we play.”

As was the case last week at Kentucky, there were questions to players about the future. Hicks and Agim, both seniors, did not hesitate in supporting their coaches.

“I said this after Kentucky, these are the right people for the job,” Agim said. “But it takes time.”

Hicks said, “It’s tough to see it right now. As the senior group, our job is to continue to show the young guys the way.”

Later, Hicks added, “These coaches will get it done.”

“You have got to face the opportunity ahead,” Agim said. “You bury this (loss) tomorrow. This is why you come to the SEC, a chance to beat the top-ranked team.”

There is a positive on the fashion front. Alabama will not be in all-white uniforms. The Hogs have that option.

They may look bigger next week, but can they play bigger?