Takeaways from Arkansas' 51-10 loss to Auburn 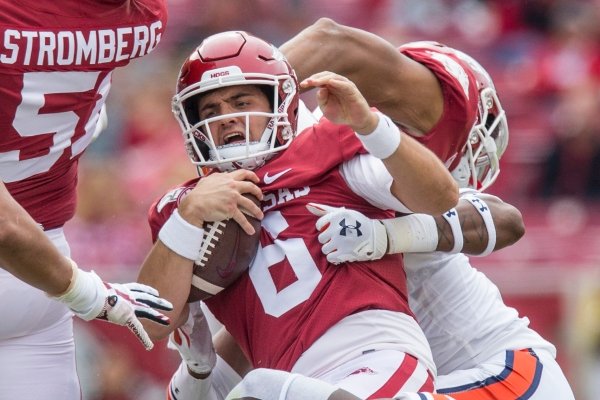 FAYETTEVILLE — Arkansas' play, outside of brief moments of excitement provided by tight end Cheyenne O'Grady and safety Joe Foucha, was largely forgettable in its latest SEC loss, a 51-10 rout at the hands of No. 11 Auburn.

But one play in particular, a rare bit of what was supposed to be special teams trickery on the Razorbacks' part, backfired miserably. With Arkansas trailing the Tigers 17-0 early in the second quarter, coaches called for a fake punt, putting the ball in the hands of punter Sam Loy rather than on his foot.

Loy, after receiving the snap from Jordan Silver, lofted a basketball-like shot in the area of receiver De'Vion Warren. The pass was intercepted by Auburn's Chandler Wooten. The play, in design and execution, now serves as a current snapshot of Arkansas football.

Razorbacks coach Chad Morris said following the loss the fake punt has been repped in practice going back as far as his first season at Arkansas. The team has practiced the play a number of times during the 20-minute viewing windows allowed to the media throughout the season with minimal success.

Morris, though, said Auburn provided a look that indicated it may work. Arkansas needed a jolt, he added, and that, of all things, is what was called for.

"We just weren't moving (the ball)," he said when pressed about the fake in his postgame press conference. "We weren't moving the chains (offensively) and maybe needed something to get something going. Luckily, they missed a field goal, so they didn't hurt us at that point. We were looking for anything to try to get us a spark.

"They had a full-on rush and (the plan was) to let the rush come and just a touch pass over the top just a little, like a basketball shot with (Warren) running underneath it. More of a screen-like (play). Didn't execute."

That play call generated groans a few boos from the stands, and rightfully so. The Razorbacks, the rest of the way, tried just about everything else in their bag, too, lining up O'Grady under center Ty Clary for the rare tight end sneak on 4th and short and placing receiver Treylon Burks in the Wildcat formation.

Arkansas did all it could to get O'Grady as involved as possible. Quarterback Ben Hicks found him in the screen game and looked for him on critical downs. In all, O'Grady, who was not available for postgame interviews due to being hit in the throat during the game, according to a team spokesman, was targeted a team-high 11 times. He finished the game with seven grabs for 72 yards and a touchdown. He was ultimately responsible for the team's only touchdown of the game, a 45-yard catch and run late in the third quarter to make it a 31-10 game.

Burks, who operated out of the Wildcat with great success at Warren High School, was not provided much assistance on his two runs. He was dropped for a three-yard loss on his first touch as Auburn's end blew up the left side of Arkansas' protection and picked up just two yards on a keeper in the red zone during the Razorbacks' 16-play, 77-yard drive that netted only three points.

Hicks said Arkansas' offensive plan entering the game was to get to the perimeter as best it could and avoid the likes of Derrick Brown, Marlon Davidson and Big Kat Bryant, who make up arguably the league's best front line. The Razorbacks found minimal success doing so against a speedy bunch that also tackles very well in space.

As a result, Arkansas felt the need to counter with some off-the-wall concepts that, in the end, left many scratching their head and questioning the staff's decision-making process.

Defense hangs in for 2.5 quarters

Razorbacks linebacker Bumper Pool and defensive tackle McTelvin Agim spoke truths in regards to the way the unit was bulldozed to begin Saturday's game. It took visiting Auburn only six plays to take a 14-0 lead less than five minutes in.

Things were not looking good against a Tigers offense that can put up points in a hurry.

"I think we got stunned early," Pool said. "We ... rebounded and then played some really good defense. I think everyone just got settled into the game, started doing what we're coached to do, playing physical. Toward the end of the game we've got to continue to fight. That's got to be a key emphasis for us: never quit. Just fight until there's no time left."

But after Auburn's early flurry, the Razorbacks settled in defensively and were able to breathe a bit of life back into their sideline. The Tigers, which put up 157 yards of offense over 25 first-quarter plays, gained only 13 in the second quarter on nine plays.

Freshman quarterback Bo Nix threw incomplete on all three of his pass attempts, too. Arkansas, all of a sudden, was playing with a bit of swagger. Safety Joe Foucha made a terrific play on quarterback Joey Gatewood's 4th-and-1 run, dropping him for a two-yard loss, then Arkansas stood tall following the disastrous Loy interception and also forced a punt on the Tigers' first possession of the second half.

"They got after us," Gus Malzahn said. "Give them credit. They were getting after it early. They got a little bit of momentum there in the second quarter. They were stopping the run, they were bringing extra guys off the edge and they got our offense to stall."

It was the offense's turn to make something happen, but that never developed. And the defense ultimately broke thanks to two quick-strike scores from Nix in the span of 22 seconds late in the third quarter. Auburn turned it on down the stretch and flipped a two-possession game into its most lopsided win of the season.

Arkansas knew all week the challenges Davis, Bryant and Davidson would present on Saturday, yet it took only three plays for Auburn's talented front to make an impact.

Coming off the left side of the Razorbacks' offensive line, Davidson not only stripped Hicks but recovered a fumble at the Arkansas 22, setting up Nix's four-yard touchdown run. Coach Dustin Fry's bunch struggled mightily to provide Hicks appropriate time in the pocket to survey the field or open running lanes for running backs Rakeem Boyd and Devwah Whaley.

The Tigers finished the game with nine tackles for loss, three sacks and three more quarterback hurries. Davidson himself racked up three tackles behind the line of scrimmage and a pair of sacks. He and Brown tied for the team lead with five tackles apiece.

Malzahn credited his bunch for the way they got after Hicks, who completed 19 of his 39 passes for 182 yards. Hicks, thanks to Auburn's pressure, also threw his first interception of the season and saw a couple of other throws nearly picked off.

"It starts upfront," Malzahn added. "I think their quarterback had a lot of pressure on him most of the game, having to throw off his back foot a lot."

After struggling to protect Hicks at critical junctures of its loss at Kentucky a week ago, it was more of the same for Arkansas on Saturday. On top of the sacks and TFLs, Hicks had two passes batted down in the first half. Starting right tackle Dalton Wagner was also blown five-plus yards off the ball on running back T.J. Hammonds' speed sweep in the second quarter. Behind a strong bull rush, Davidson overpowered Wagner and forced him into a collision with Hammonds. The play resulted in a five-yard loss.

Morris noted following the loss, too, that starting left tackle Colton Jackson was removed from the game with an injury. He did not expound on Jackson's status, but it could be another hit to an offensive line group that has not shown great improvement through seven games. Now, it has to prepare for No. 1 Alabama, which entered this weekend averaging 2.5 sacks and better than six tackles for loss per game.

The Tigers, led by Nix, were able to pull away from the Razorbacks beginning late in the third quarter by pushing the ball down the field, challenging Arkansas' secondary to make plays. They did not.

Those two quick scores in the span of 22 seconds - with Hicks' first interception sandwiched in the middle - came on explosive plays to explosive playmakers. A coverage bust led to receiver Seth Williams' 48-yard score. The only player in Williams' general vicinity as he crossed the goal line was Pool.

Then, on the next possession, receiver Anthony Schwartz, known for his world-class speed, gained 28 yards on a reverse down the Auburn sideline and later capped the drive with a 28-yard catch from Nix, who in the fourth quarter found Williams again from 15 yards out.

And to cap the day, running back Harold Joiner, who through six games had only 19 yards rushing on four carries, burst through the heart of Arkansas' defense for a 32-yard touchdown run. He finished with four carries for 59 yard. Starting tailback Kam Martin also gashed the Razorbacks for 84 yards, 52 of which came on one run in the first quarter, setting up an early Auburn score.

Auburn's offense totaled three plays of 30-plus yards in the win, bringing its season total to 21. That is just three shy of last year's figure. Arkansas has proven susceptible to the big play defensively in 2019, and Malzahn knew it. When the game became a bit too close for his liking, he took chances and the Razorbacks had no answers for the Tigers' speedy skill guys.