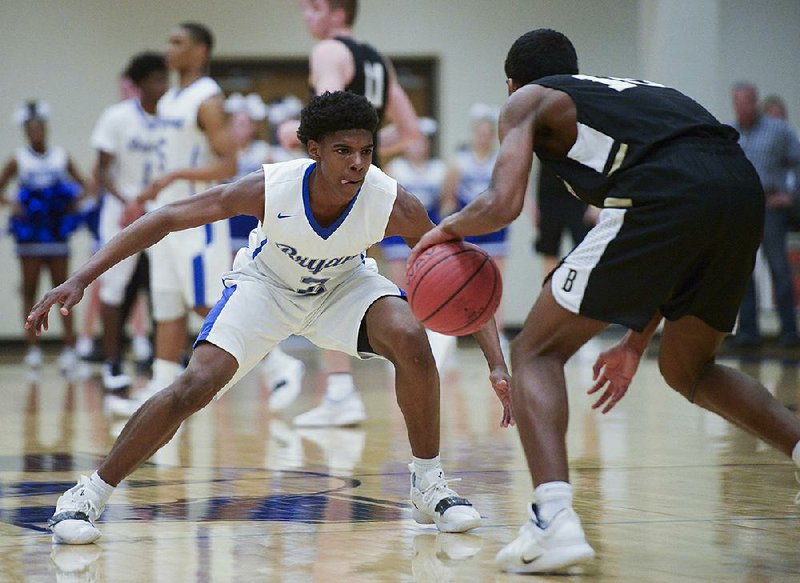 FAYETTEVILLE — Arkansas looks to have made major inroads trying to land 4-star guard Khalen Robinson during his official visit, which wrapped up Sunday morning.

"They definitely made a big jump from where they were at first,” Robinson said. “I had them in my top four. They're probably 1 or 2 now."

He and Razorbacks guard target Moses Moody visited Arkansas together and have expressed interest in playing together in college.

"Most definitely. We had a long talk last night and we really want to play with each other and it really showed,” Robinson said. "I haven't seen him in so long, so seeing him just brought joy and I really liked it.”

"I really liked it. Getting to chill with Isaiah Joe as my host, getting to know more about Arkansas,” he said. “I really got to see the background and everything that goes on down here, so I really liked it a lot."

Robinson made an unofficial visit to Arkansas on Aug. 24. ESPN rates Robinson a 4-star prospect, the No. 19 point guard and No. 90 overall prospect for the 2020 class.

The highlight of the trip was seeing Arkansas’ plan for he and Moody should they be Razorbacks.

Robinson averaged 18 points, 4.5 rebounds, three assists and three steals per game as a junior while leading Bryant to the Class 6A state championship game.

Like other recruits, he has been impressed with how detailed Musselman and his staff are in laying out their plans to develop them.

"Just the detail and the planning that they have for me,” Robinson said. “They brought out about 20 books and showed me how I would be able to get better and fit into their game system."

Robinson looks to be closing in on a decision after talking to his parents.

"I'm possibly committing in about 2-3 weeks,” he said.