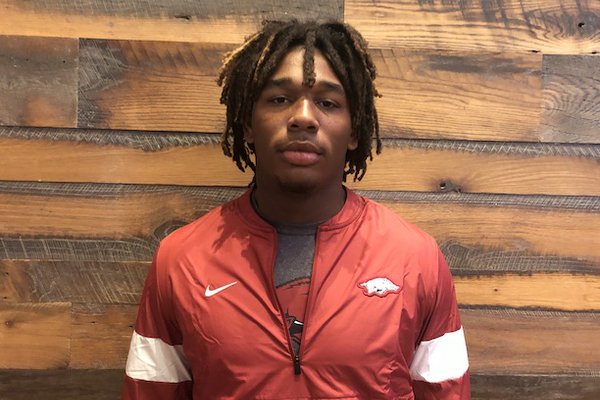 FAYETTEVILLE — The biggest thing that Memphis (Tenn.) Whitehaven linebacker Bryson Eason saw in Auburn’s 51-10 win over Arkansas was how much he is needed.

“Just checking the game out to see where I could fit in on their defense,” Eason said of his main objective on his official visit. “See where they need me at. Just to come in and have the possibility to play early is a huge reason to consider Arkansas.”

Eason (6-3, 250) was one of six official visitors Arkansas hosted this weekend, including a pair of his teammates in linebacker and Arkansas pledge Martavius French (6-2, 240) along with linebacker/safety and Mississippi State commit Tamarion McDonald (6-2, 220).

French and Eason are both four-star prospects, per ESPN, and McDonald a three-star. The three have made it clear that they want to stay together and play for the same college football program.

Arkansas, Tennessee, Mississippi State, Ole Miss and Memphis are offering that opportunity to the trio.

“Just because it's fun,” Eason said. “It's a good brotherhood. We've been playing together this long so why stop it now?”

The trio has now visited Arkansas and Tennessee officially with both staffs stressing their vision of turning around rebuilding programs.

“They just let us know they are young and they need some pieces to start it off and get it going at least a little bit,” Eason said.

McDonald was the last of the three to be offered by Arkansas and Tennessee, something that pleased Saulsberry.

“I am so happy that they have all these opportunities now,” Saulsberry said. “They have talked about how much they want to do that and stay together. But as a coach, I am happy they know they have the opportunity to do that or go their own way if that is what they feel is best.”

Eason is the only uncommitted prospect of the three and was asked what it would take for Arkansas to win him over.

There are a couple of factors that will weigh heavy with the trio.

“The playing time,” Eason said. “The relationships, just keeping it real and genuine.”

“We have our eye on finishing this season strong and then getting into the playoffs and making something happen,” Saulsberry said. “That’s what these guys are leading us to and then they can all get it done on the next level.”