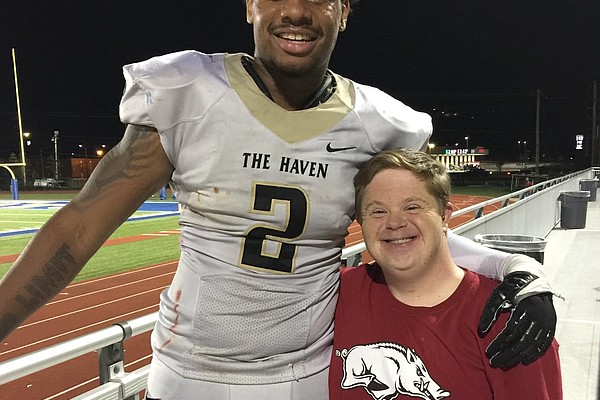 “The visit was nice,” French said. “I worked on Bryson and Tamarion. We had a good time down here, so that could play a big role for us. We got to spend time with the players and the coaching staff. They’re pretty cool. A lot of them are from Memphis or know people from Memphis, so that makes everything better, too.”

French, 6-2, 236 pounds, 4.7 seconds in the 40-yard dash, of Memphis Whitehaven, had other scholarship offers from Tennessee, Ole Miss, Mississippi State, LSU, Oklahoma, Florida and others before picking the Razorbacks in July.

He said he and the other five official visitors visited coach Chad Morris’ home after the 51-10 loss to Auburn.

“We went to coach Morris’ house after the game and they told us, ‘Y’all saw the result today. Only you guys can help make it better,’” French said. “So we were talking about that, signing into this class and making it better.”

French has recorded 41 tackles, 13 tackles for loss, a sack, a forced fumble, an interception and a tackle for a safety this season. ESPN rates him a 3-star prospect and the No. 38 outside linebacker in the nation for the 2020 class.

“Seeing Canaan again, just being down here again, that made me happy,” French said.

French, Eason and McDonald made a recent official visit to Tennessee. His final decision will be about trust.

Some Arkansas fans have been uneasy about French taking other visits.

“It’s just all a part of recruitment,” French said. “I'm just trying to make sure I make the right choice for me."