McGlothern could envision heating up Arkansas 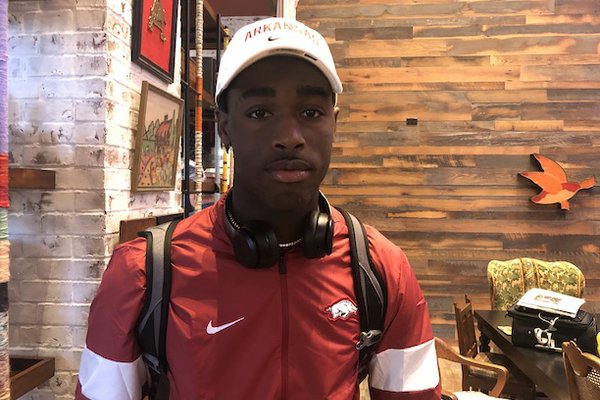 FAYETTEVILLE — Apparently what Arkansas needs to revive its football program is a couple of new thermostats.

That’s the thought of Spring (Texas) Klein Oak Forrest comeback Dwight McGlothern (6-1, 180 pounds), who describes himself as one.

“Swag, leadership and I feel like I am a thermostat,” McGlothern said. “If I make a big play, the whole team will get excited and come on.”

McGlothern, a four-star prospect in the 247 Sports composite rankings, was one of six high school standouts who took official visits to Arkansas this weekend.

“It was a good visit,” McGlothern said. “I like what I saw. They need a lot of help and I can see where I can come in and help at.”

“I still kind of have the top five, but I am keeping it open,” McGlothern said.

Arkansas was the first of his official visits and lifted the Razorbacks to the top of his list, pending other visits.

“It was big,” McGlothern said. “I like how the coaches were with my parents. They have a better mind of Arkansas now. I’m new so I really didn’t know anything, but I like it. I like it a lot. I can really see myself going here.”

The Arkansas coaches and the Razorbacks' 51-10 loss to Auburn got it across that Arkansas can use help.

“They know it is like rebuilding time,” McGlothern said. “They need guys like me and the other people that were on unofficial visits to come in and help. If we just keep getting people like me and them guys, it will turn it back around.”

He has plans to announce his decision at the U.S. Army All-American Game on Jan. 4, so will not sign during the December early signing period.

“I am still looking at January right now,” McGlothern said.

He does not have any other official visits set up.

“Not as of right now,” McGlothern said. “This is my only official as of right now. I am still trying to get to Oregon and stuff. I’ll just kind of see.”

“It was nice,” McGlothern said. “I liked how he was talking to me and stuff. He was a cool dude. He was just telling me that they are really rebuilding. They played good yesterday, especially the defense. It is tough going against Auburn and that offense.”