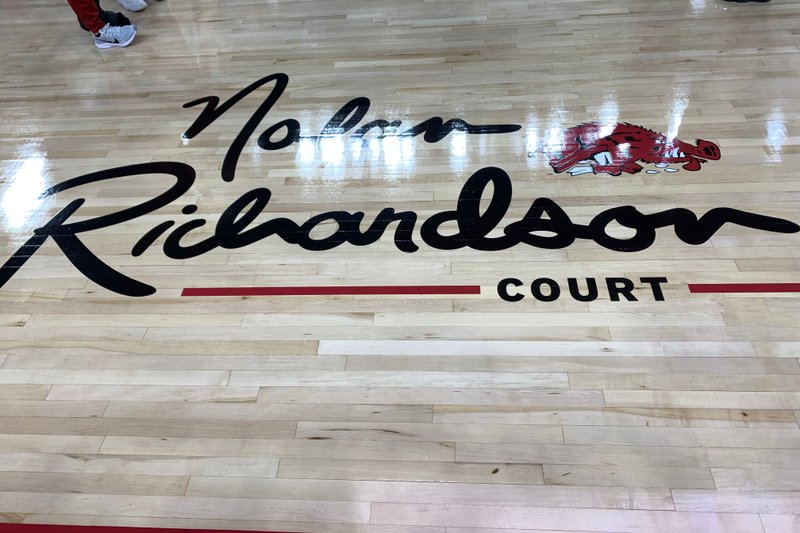 The logo for Nolan Richardson Court at Bud Walton Arena is shown Sunday, Oct. 20, 2019, prior to a game between Arkansas and Arkansas-Little Rock in Fayetteville.

FAYETTEVILLE — After a groundswell of public support, Nolan Richardson Court was unveiled Sunday at the 26-year-old Bud Walton Arena.

The new court features two 6-foot high by 10-foot long logos that feature Richardson’s signature in black and a red slobbering hog logo that used to be featured at midcourt of Walton Arena and its predecessor, Barnhill Arena.

The Nolan Richardson Court logos are placed on opposite ends of the floor near midcourt - one in front of the scorer’s table and one in front of floor-side seats that are opposite of the team benches.

The new court also features other new designs, such as a 23-foot long, 10-foot, 3-inch tall Razorback logo at midcourt that is set inside of a 26 ½-foot tall, 32-foot long geographic outline of the state of Arkansas. The floor has dark wood stains inside the 3-point line and at midcourt that contrast to a lighter stain elsewhere.

Members of the University of Arkansas administration and UA board of trustees unveiled the court prior to an exhibition game between the Razorbacks and Arkansas-Little Rock. Several of Richardson’s former players were also on the floor, as was St. John’s coach Mike Anderson, who was Richardson’s longtime assistant at Arkansas.

Anderson, who was fired as Arkansas’ head coach in March, was given a loud ovation when he stepped onto the floor. Joining Anderson on the floor was TJ Cleveland, a former Richardson player at Arkansas who has been an assistant to Anderson, his uncle, since 2004.

Former U.S. President Bill Clinton delivered a video address that congratulated Richardson. Prior to the floor design being unveiled, Clinton’s address lobbied for the slobber hog logo to be reinstated on the arena floor.

Richardson coached at Arkansas from 1985-2002 and won a school-record 389 games. Richardson led the Razorbacks to three Final Fours and won the 1994 NCAA championship game, 76-72 over Duke

Richardson was fired as Arkansas’ head coach with one game remaining in the 2002 regular season but has long since reconciled with the university.