SEC FOOTBALL ARKANSAS AT NO. 1 ALABAMA: 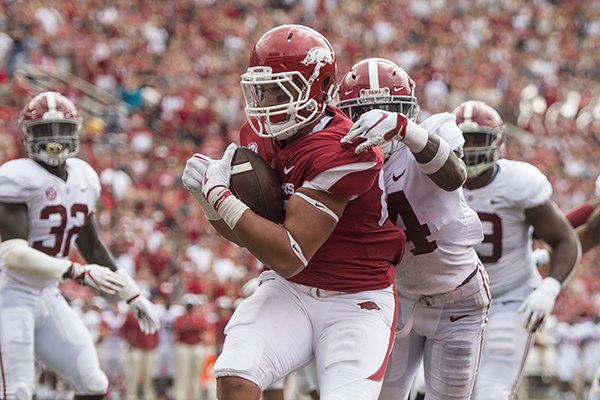 Arkansas tight end Cheyenne O'Grady reels in a touchdown pass under pressure from Alabama safety Deionte Thompson in the second quarter of a game Saturday, Oct. 6, 2018, at Razorback Stadium in Fayetteville.

FAYETTEVILLE -- In the midst of last year's offensive struggles for the Arkansas Razorbacks, there lived a bright spot against one of the nation's best defenses.

The University of Arkansas could not hang with No. 1 Alabama in a shootout on Oct. 6, 2018, but the Hogs racked up impressive offensive statistics in a 65-31 loss to the Crimson Tide.

The Razorbacks compiled 405 total yards on 71 plays, averaging 5.7 yards per play with quarterback Ty Storey taking all but four snaps against the nation's No. 16 defense, which ranked No. 12 in defensive scoring, allowing 18.1 points per game.

Arkansas will be without Storey -- though they are slated to host the former Charleston standout and Western Kentucky starter Nov. 9 -- when the Hogs travel to Tuscaloosa, Ala., on Saturday to face No. 1 Alabama again.

The Hogs will have ace tailback Rakeem Boyd, whose 102 rushing yards on 15 carries in last year's game marked the first 100-yard rusher Arkansas had against Alabama since All-American Darren McFadden ran for 195 yards and 2 touchdowns in a 41-38 loss at Bryant-Denny Stadium in 2007. That win, in Coach Nick Saban's first season with the Tide, started Alabama's current 12-game winning streak in the series.

"It was a fun game," Boyd said of last year's game against the Tide. "Before the game, I think Darren McFadden just told me to do what you always do, so I went out there and did what I always did. The line blocked great against Alabama last year. We had a lot of old guys that knew what was going on. They held them up pretty good."

Arkansas made clever use of its tight ends, with Cheyenne O'Grady (7-48), Austin Cantrell (2-21) and Grayson Gunter (1-10) combining for 10 receptions for 79 yards. O'Grady grabbed an 8-yard touchdown pass from Storey and a 3-yard touchdown pass from Cole Kelley (on his only pass of the game) to pull Arkansas within 28-14 midway through the second quarter. The Razorbacks also lost a Storey fumble at the Alabama 1 with a chance to pull within 21-14 early in the second quarter.

Boyd and fellow tailback Chase Hayden combined for seven receptions for 50 yards as the Razorbacks went to the flanks to turn Alabama's aggressive pass rush against it.

"Well, I thought we did a great job of mixing up our run-pass and tying in some screens to take advantage of how hard they pursue and rush," Arkansas Coach Chad Morris said. "I thought last year we did a good job of mixing that up. We got the ball out on the edge, so that was part of our plan a year ago."

"I don't want to go into too much detail about last year's scheme," Arkansas offensive coordinator Joe Craddock said. "We did some pretty good things schematically, and we went out and executed.

"We kind of kept them off balance and that really helped us. You take some of that for this year as well, but they're a lot different defense in my opinion. I think they're a little bit better on the back end this year than last year. It'll be a big challenge for us, especially on the road at their place at night."

Arkansas' 405 total yards were the most allowed by Alabama during the regular season. Georgia put up 454 yards in the SEC Championship Game, Oklahoma had 507 in the College Football Playoff semifinal at the Orange Bowl, and Clemson posted 482 in the CFP championship game.

The Razorbacks' 31 points were the most allowed by the Crimson Tide during the regular season, and ranked third overall behind national champion Clemson (44) and Oklahoma (34 points).

"We struggled last year, and hopefully we need to do better in this game," Saban said on Wednesday's SEC teleconference.

Morris was asked about what tweaks Arkansas would have to make to last year's plan to be productive.

"We've got to continue to try to be as creative as we can in moving the football and attacking the weaknesses, if there are any," Morris said. "We haven't found too many."

Arkansas veterans in the Smith Center interview room Tuesday said last year's success against the Tide counts for nothing Saturday.

"To be effective, you just have to execute the game plan really well," junior center Ty Clary said. "And the coaches have come up with a really good game plan. But that was last year. Last year was last year."

Arkansas' quarterback situation is an unknown for the second consecutive week, as last week's starter Ben Hicks is practicing with a sore left shoulder he suffered against Auburn. Nick Starkel, who started Games 3-6, did not play for the first time this season in the 51-10 loss to Auburn.

Boyd, O'Grady and other offensive weapons such as receivers Treylon Burks, Trey Knox and Mike Woods, and backup tailback Devwah Whaley will all have to show up for Arkansas to re-create last year's offensive success.

"We think their quarterbacks have both played pretty well," said Saban, referencing Hicks and Starkel. "They've got a really good runner. The tight end is an outstanding player.

"They've got a couple of receivers who are ascending and becoming much more productive for them. They have a great scheme on offense in terms of the things they do. It's very difficult to defend. A lot of multiples that you have to sort of try to defend."