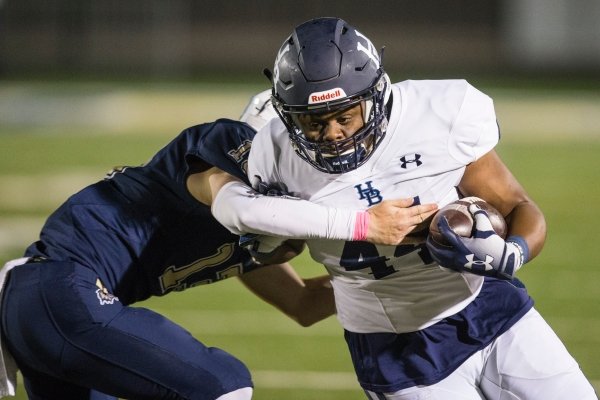 Arkansas is keeping an eye on Springdale Har-Ber junior tight end Errington McRae, who visited the Razorbacks for the Auburn game on Saturday.

He and Arkansas tight ends coach Barry Lunney Jr. were able to catch up before the game.

“We talked a little about my game the day before, and how he was still watching me closely and also how I’m always welcomed to come check them out,” McRae said.

McRae, 6-3, 238 pounds, has scholarship offers from Memphis and Bowling Green, and is drawing interest from numerous other programs.

“Louisville, Tulane and Mizzou have been in contact the most consistently,” McRae said.

He had 12 receptions for 189 yards and two touchdowns as a sophomore. He has recorded 30 catches for 595 yards (19.8 yards per catch) and five touchdowns this season.

“I liked how the coaches and fans were so welcoming the most,” he said.

“From last season to this season, I’ve made tremendous progress as a player, becoming much stronger and faster,” said McRae, who also plays basketball for Har-Ber. “Expanding my game to a player that can be on the line or spaced out as a tight end.”

He’s looking to make a couple more visits in the near future.

“I plan on going to Memphis on the second of next month,” he said. “I just recently talked with Coach (Adrian) Mayes, the tight end coach at North Texas, and we’re planning on a visit soon.”