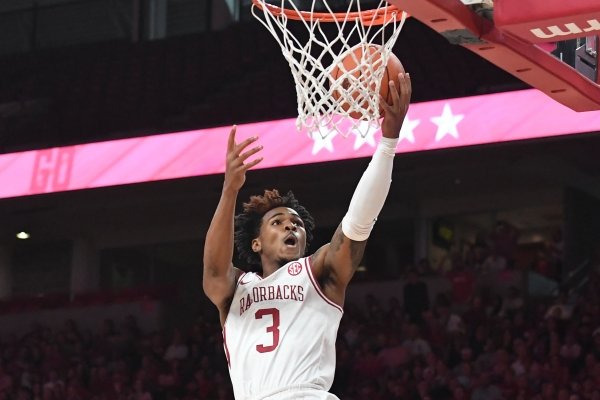 FAYETTEVILLE — Friday night's exhibition against Southwestern Oklahoma State (7 p.m.) will serve as the final evaluation period for Arkansas coach Eric Musselman and his staff ahead of the team's season opener against Rice on Nov. 5.

In previewing the second preseason tuneup Thursday, Musselman said he is looking for the Razorbacks to be sharper in their execution and take more pride in valuing the basketball. Assistant coaches have watched film of the Bulldogs, but the first-year coach's primary focus this week has been on his group.

"They like to run and jump, they play a little bit of matchup zone, they’ll press a little bit," Musselman said. "Philosophically, this has probably been the least we’ve ever prepped for a particular team because I think it’s important to continue to work on who we are and try to get ready for these nonconference games.

"With this game, I’m a little more concerned with how we do things, trying to figure out different combinations and play different guys in different spots and maybe experiment a little bit more than we did in that first exhibition."

Arkansas turned the ball over 18 times in its exhibition win over Arkansas-Little Rock last Sunday, and 14 were unforced, he noted. Sophomore guard Desi Sills was the lone regular who did not have a turnover in game, and Jeantal Cylla, Jalen Harris, Mason Jones and Reggie Chaney each finished with three.

All three of Jones' turnovers came on player-control fouls, two in the first half and one in the game's final minute. Musselman has since challenged Jones to be better and more consistent, and the junior has responded this week.

"He’s had really good practices since Sunday," he said. "It’s been his best week, by far, of practice dating back to even when I first got the job - six-and-a-half months or whatever it’s been. This short stretch between Sunday and right now have been his best practices, so hopefully they’ll carry over into the game."

Chaney also had a frustrating outing against the Trojans, fouling out in less than 15 minutes after scoring just four points on 1 of 2 from the floor. Musselman said there is a bit of an adjustment period that players, Chaney included, must go through in returning to game-like situations after practicing for six-plus months without officials.

Defending without fouling and/or grabbing jerseys is certainly a point of emphasis in the early stages of the season.

Musselman also expounded a bit on the play of his starting group - Jimmy Whitt, Sills, Cylla, Adrio Bailey, Isaiah Joe - on Sunday. The lineup finished the game plus-19 in its seven minutes, 25 seconds on the floor and scored at a 1.546 point-per-possession clip in the opening three-plus minutes of the second half to push a nine-point halftime lead to 20.

He came away most impressed, though, with the unit's defensive intensity. Execution of half-court sets was a touch surprising, too.

"Defensive pick-and-rolls, we did a great job of hard showing/trapping the ballhandlers and pick-and-rolls," Musselman said. "I just thought that first unit did such an incredible job of clicking on both sides of the ball. I thought they really, really executed offensively.

"We’ve added a lot of half court sets, kind of specialty, NBA-type sets that take about 12-15 seconds to kind of develop instead of a traditional college set, which takes sometimes 20 seconds or more to develop. But they did a great job executing. With the number of sets, we thought we’d look a little bit sloppier with the ball."

Bailey, a senior, and Sills performed well in the first exhibition as well, Musselman said. Bailey finished with eight points (4/4 at the free throw line), four rebounds and three assists and played within his skillset. He had a pair of highlight plays in the win, too, skying for a putback after Joe misfired on a 3 and throwing down a dunk in transition following a theft of UALR guard Alsean Evans.

"He did exactly what we asked. He was really good on dribble-handoffs," Musselman said. "He was really good on throw and chases, where he caught the ball at the top of the key and swung it to one of our guards, either left wing or right wing, and chased that into a pick-and-roll. If he can play out on the floor and space the floor with his passing, his dribble-handoffs and then his ability to dribble-drive against bigger, slower guys, that’ll certainly make our offense flow a lot better."

Sills (cramps) exited the game in the second half, but Musselman said afterward he was not concerned with the guard's status moving forward. He chipped in 12 points in the win, knocking down a pair of left-corner 3s. Sills also converted 3 of 4 attempts in the lane.

Musselman added that Sills (2/7 3FG) did a good job not relying solely on his 3-point shot.

"His 3-point shooting is his greatest asset and a part of his game we really need him to contribute, but I thought he did a good job putting the ball on the deck as well," he said. "Actually, he put the ball on the ground a little bit more than what he has in practices, so I thought he mixed it up when he had the ball in his hands."