Arkansas pair off to running start 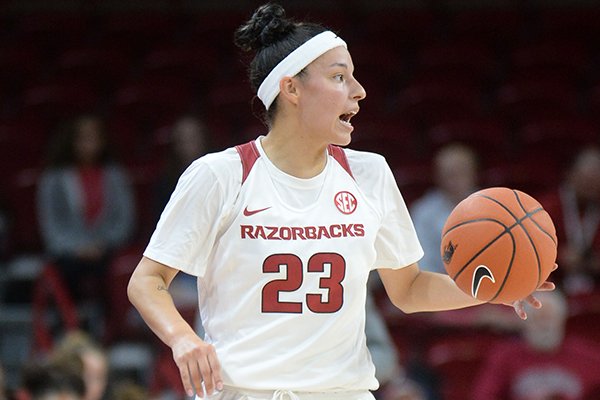 Arkansas guard Amber Ramirez speaks to her teammates as she brings the ball up the floor against Pittsburg State Thursday, Oct. 24, 2019, during the first half of play in Bud Walton Arena.

FAYETTEVILLE -- If Thursday night's women's exhibition basketball game was any indication, the SEC will have its hands full guarding Amber Ramirez and Chelsea Dungee this season.

The pair combined for 49 points as Arkansas easily downed Pittsburg State 97-63 in front of an announced crowd of 1,390 at Walton Arena.

"We got what we wanted out of it," Arkansas Ccoach Mike Neighbors said. "Pittsburg State is a tremendous team, and they're going to win a lot of games. I'm just happy that we came out and played as well as we did. We only turned it over seven times and scored 97."

Dungee, who was named preseason first-team all-SEC, led the Razorbacks with 26 points on 10-of-14 shooting.

"It was good to get back out there in a game situation and see where we were at with our playbook and get some looks," Dungee said. "I feel good about where we are at."

Ramirez, a TCU transfer, secured the opening tip and actually started running toward the Pittsburg State basket before quickly realizing her mistake and reversed course.

"I was so excited to get going, I guess it was just first-game jitters," Ramirez said. "I haven't played a full game in about a year and a half. Last year was hard sitting out but it was so fun to get back out there on the court and especially to play with Chelsea again."

Dungee was appreciative of her teammate's efforts, as the two once played together on an AAU team based out of San Antonio.

"Amber is a great shooter, she really takes the pressure off me when she's out there with her ability to score and handle the ball," Dungee said. "It's been awhile since we've gotten to play with one another.

Makayla Daniels added 17 points and Alexis Tolefree chipped in 13 for the Razorbacks, as Neighbors played every healthy player on the roster.

"It was good to get our young players some looks at the end," Neighbors said. "It's way different when it's practice speed versus game speed, I don't care what level of basketball you're at. I liked what I saw out of them."

Pittsburg State has a quick turnaround, as the Gorillas take on Kansas on Sunday at Allen Fieldhouse before opening the season with Oklahoma Baptist.

"We were very appreciative of the opportunity to come down here and play in a venue like this and find out more about ourselves," Pittsburg State Coach Amanda Davied said. "Arkansas is a very good team, and they shoot the basketball extremely well. They will be a tough out for anyone."

A'Tyanna Gaulden has been nursing an injury and was held out by Neighbors, but he expects her to be ready in time for the season opener Nov. 8 against New Orleans.

"We didn't want or feel the need to rush her back," Neighbors said. "She's doing fine and we expect her to be ready to go for that ... game."