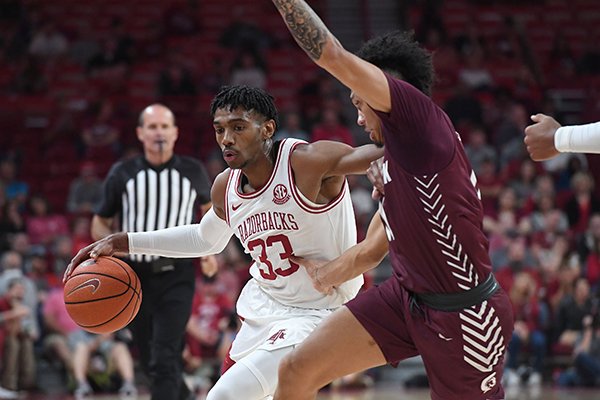 FAYETTEVILLE -- The last time the University of Arkansas men's basketball team played an exhibition game against Southwestern Oklahoma State, Jimmy Whitt led the Razorbacks to a 103-58 victory at Walton Arena with 19 points, 4 assists and 2 steals in 23 minutes.

The game played on Nov. 5, 2015, was the Arkansas debut for Whitt, who after the season transferred to SMU.

NOTEWORTHY There will be no internet, television or radio broadcast of the game, which is part of Arkansas’ season-ticket package … Arkansas beat UALR 79-64 in the Razorbacks’ exhibition opener last Sunday … The Razorbacks’ next game will be their season opener against Rice on Nov. 5 in Walton Arena.

Four years later, Whitt, the Razorbacks and Southwestern Oklahoma State will all be back together at 7 tonight at Walton Arena for another exhibition game.

Whitt, a 6-3 senior point guard, is back for a second stint at Arkansas as a graduate transfer after redshirting and playing three seasons with the Mustangs.

[Video not showing up above? Click here to watch » https://www.youtube.com/watch?v=AfiixsHUc48]

The Razorbacks beat the University of Arkansas at Little Rock 79-64 in their exhibition opener Sunday when Whitt started and played 31 minutes. He finished with 7 points, a team-high 9 rebounds and 2 assists.

"Jimmy did a great job, obviously, rebounding the ball," Arkansas Coach Eric Musselman said. "We feel like he's one of the best rebounding guards in the entire country."

"I thought his ball distribution was great, thought he got us in and out of our sets really well," Musselman said of Whitt's ball-handling against UALR. "We didn't have many late-clock situations, but I thought he got the ball on kick-outs to the right people."

"He's kind of the head of the snake so to speak defensively for us, and I thought he gave a really good perception visually as the other four guys were watching his pick-up point," Musselman said. "His intensity, where he shaded the ball to in the half court defensively. I thought he did everything the way we wanted him to do."

Whitt was joined in the Razorbacks' starting lineup against UALR by sophomore guards Isaiah Joe and Desi Sills and senior forwards Adrio Bailey and Jeantal Cylla. Musselman said it's possible the starting lineup could change tonight.

"We're still trying to decide exactly what we're going to do," he said. "Do we want to continue the momentum that we had off of Little Rock? Or do we put someone else in that lineup and see how that goes?

"We're still trying to put the pieces together. It's so, so, so, so, so early, but we want to continue to build confidence and a little bit of momentum as well."

Joe led Arkansas with 25 points against UALR and hit 8 of 17 three-pointers.

Cylla, a 6-7 graduate transfer from North Carolina-Wilmington, had 13 points and six rebounds in his first game at Walton Arena.

"It felt great," said Cylla, who is from Lake Worth, Fla. "Growing up I always heard about how hard it is to play against the Razorbacks at home. I'm just happy to be on the right side.

"I know it wasn't a real game, but for me it felt like a real game because I got to put the throwback jersey on and play [in front of] some new fans. I can't thank Coach Musselman and his staff enough for having me here."

"I thought he did a really good job of mixing up three-points shots and putting the ball on the deck," Musselman said. "He did a good job trying to confuse the defense a little bit instead of just relying solely on his three-point shot."

The Razorbacks were plus-24 points with Bailey on the floor. He had 8 points, 4 rebounds and 3 assists in 18 minutes and hit 2 of 2 shots and 4 of 4 free throws.

"I thought Adrio played really well," Musselman said. "He played within himself. He did exactly what we asked. He was really good on dribble-handoffs. He was really good on throw and chases, where he caught the ball at the top of the key and swung it to one of our guards, either left wing or right wing, and chased that into a pick and roll.

"If he can play out on the floor and space the floor with his passing, his dribble-handoffs and then his ability to dribble drive against bigger, slower guys, that'll certainly make our offense flow a lot better."

"We feel like his jump shot has really improved," Musselman said. "We certainly think, right now, Jalen has a little bit more confidence than he had last year maybe from a shooting perspective."

Mason Jones, a junior guard who averaged 13.6 points last season, shot 1 of 6 from the field and had three turnovers. He scored four points in 20 minutes before fouling out.

Musselman said that after having a subpar game, Jones has responded well in practice.

"It's been his best week, by far, of practice dating back to even when I first got the job," Musselman said. "Six-and-a-half months or whatever it's been. So hopefully they're carry over into the game."

Musselman said he wants to see more rebounds and fewer turnovers and fouls tonight after the Razorbacks struggled in those areas against UALR. Arkansas committed 26 fouls as UALR hit 13 of 30 free throws and outrebounded the Razorbacks 42-37.

"We just have some players that need to value the basketball better," Musselman said.

The fouling, Musselman said, likely was a result of it being so early in the season.

"Historically, the first week of the NBA season, there's a lot of fouls called," Musselman said. "First week, two weeks of college basketball, it's the same thing. Then it kind of starts evening out as the players adjust to the refs.

"Do we tell our team, 'Hey, can we win the rebound battle at three of the five positions on the floor?' " Musselman said. "Can we out-rebound the point guards every night between Jimmy and Jalen? Can we do that at the off-guard? Can we do that at the small forward? Then try to hold our own at the four or five."

Whitt figures to hold his own or more against other guards in most games.

"Obviously, his length and him being able to grab rebounds is big for us because we already have a lack of size," Cylla said. "Jimmy sticking his nose up there is huge for us."