Saban gets direct with the media 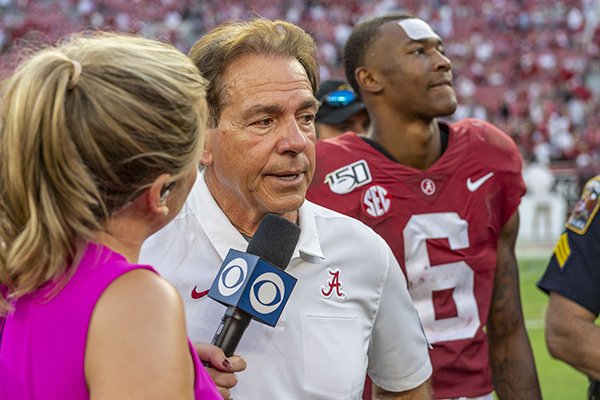 FAYETTEVILLE -- It must have been time for another classic wake-up call from Nick Saban, who occasionally uses media questions to deliver a message to his team.

At his Wednesday night's postpractice news conference, a reporter asked if it was his intent to play third-team quarterback Taulia Tagavailoa to "expedite his progression" behind his injured brother Tua Tagavailoa and presumed starter Mac Jones for Saturday's game against the University of Arkansas.

Saban got worked up.

"So we're going to play everybody that can expedite winning the game. That's what we're going to do. So I don't think anybody should expect us to do anything else."

Saban, looking disgusted, then wrapped up the news conference by saying, "Man!" with a small shake of his head as he left the podium.

Because the wideouts are so fast, some cornerbacks give cushions to prevent them from sprinting past for over-the-top plays. When they have a cushion, the wideouts are dangerous after the catch.

"They're fast and they're electric," Arkansas linebacker Grant Morgan said. "I think one of their best plays is slants. If you score on slants the majority of the time, then obviously you've got something going for you."

Arkansas defensive coordinator John Chavis noted how dangerous slants and their off-shoots can be.

"They throw the slants then they've got the double move where they take that step inside for the slant then they come back out and they're up the field," Chavis said. "Great skill athletes, that puts a lot of pressure on you. We've got to be able to defend it because I know we're going to see it."

Last week, Tennessee Coach Jeremy Pruitt said he's not sure the Tide slants can be stopped.

"But I've yet to see one yet that can do that. So I think you have to be able to mix it up, and if you can get a tipped ball here or there, or get them off schedule on a route, maybe mixing up the coverages or bumping them at the line, I mean, there's certain things. But there's not anybody that has shut them down over the last couple of years."

Senior Connor Limpert, who made 1 of 2 field goals Saturday, is now 11 of 14 on the season and remains on track to own the the career field goal percentage mark at Arkansas.

Arkansas will enter Saturday's game as a 31-point underdog, just the fourth game since 1997 the Razorbacks have been an underdog of 30-plus points.

The Hogs were 37-point underdogs for a road game against the Crimson Tide in 2017 with Cole Kelley starting for the injured Austin Allen, and Arkansas covered in a 41-9 loss.

The Razorbacks also covered as 35-point underdogs in a 65-34 home loss to No. 1 Alabama last season.

Should Arkansas lose at Alabama on Saturday, it would mark the Razorbacks' 13th consecutive setback in the series, pushing it right up against a century old streak.

The Razorbacks' longest losing streak to an opponent is 14 games in a row against Texas, from 1894, the first season of Arkansas football, through a 34-0 loss in Fayetteville in 1932. Arkansas' first victory over the Longhorns came in a 20-6 decision in 1933 at Austin, Texas.

Coach Chad Morris was asked whether he considered the music played at practice as a way of keeping up the energy. Morris and Bret Bielema both allowed hype music at practice, while coaches like Nick Saban and Jimbo Fisher do not permit music.

"I think it's just to each its own," Morris said. "It's whatever you like and whatever you feel like gets your kids going. We've been playing music for I don't know how many years. It's always added a little bit different ... it breaks up the monotony of practice at times.

"We've always got some type of noise in the background, but we did it at Clemson and we've done it anywhere we've ever been."

Alabama holds a 22-7 edge in on-the-field results against Arkansas. The official NCAA accounting of the record switches to 19-8 based on NCAA Infractions rulings against the Crimson Tide.

Alabama leads the series 9-4 in games played at Bryant-Denny Stadium, 6-5 with the NCAA rules violation adjustment.

The Crimson Tide have won the past 12 meetings, ever since Coach Nick Saban's arrival in Tuscaloosa.

Alabama has added LED lights to their in-game experience, which will be on display for the night game against the Razorbacks.

"I mean lights are lights in my opinion," said Arkansas Coach Chad Morris, who added he had seen the display in Alabama's 35-13 victory over Tennessee last week. "I watched the game the other night, and it's got a lot of cool game-day features to it, and I'm sure their fans were excited about it."

Defensive coordinator John Chavis said the Razorbacks had moments against Auburn that made him "really proud of the unit" as Arkansas bowed up for a stretch of the game after the Tigers scored two touchdowns in the first five minutes.

"We gave them some momentum early in the game," Chavis said. "We didn't fit a speed sweep. We were so close. If we just have one guy, my linebacker, that if he fits it correctly ... I don't know how many times we've repped that particular sweep in practice, but if we get a fit it's a 4-yard, 2-yard, 3-yard gain. But we didn't, so it's a long run. They score a touchdown. After that we came back for about 35 or 40 minutes of the game I think we played as well as we could."

The play Chavis referenced was a quick pitch to Kam Martin to the right side that broke for a 52-yard gain on the first play of Auburn's second series. On the play, linebackers Bumper Pool and De'Jon Harris flowed to the edge but were reached by offensive linemen who got hands on the linebackers. Safety Myles Mason overran the play and safety Kamren Curl ran Martin out of bounds at the Arkansas 11.