Hogs impressed with No. 1 Tide’s offense 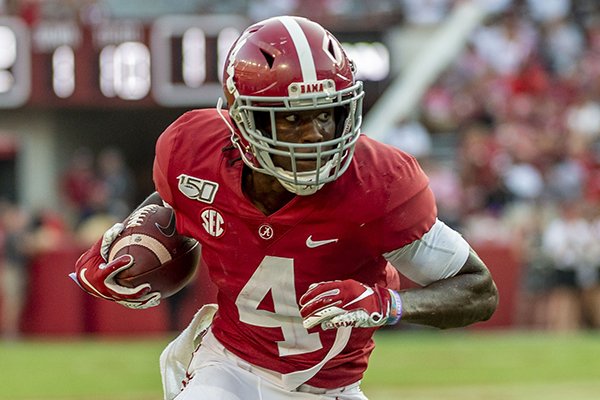 Alabama wide receiver Jerry Jeudy (4) gets loose against Ole Miss during the second half of an NCAA college football game, Saturday, Sept. 28, 2019, in Tuscaloosa, Ala. (AP Photo/Vasha Hunt)

The narrow margins came to a close three years back, largely due to a very specific reason.

The Alabama offense has been on a rampage in its last three meetings against Arkansas, outscoring the Razorbacks 155-70. Here’s a look at the Tide’s offensive stats from those game.

The play of Jalen Hurts and Tua Tagavailoa at quarterback added dimensions to the attack and aided Alabama in blowing out the Hogs with averages of 52 points, 551 yards and 71.4% pass completions the past three years.

Alabama is expected to start redshirt sophomore Mac Jones in his place. Jones will have a rugged offensive front and plenty of skill talent at his disposal to operate the nation's fourth-ranked scoring offense (48.7 points per game) and passing game (347.0 yards per game), and the ninth best unit in total offense (513.4 yards per game).

"First of all, there's not many deficiencies on that football team," Arkansas Coach Chad Morris said. "And when you look at Mac Jones, he came in the other night, and they'll do a great job of preparing a plan for him to what he can execute and execute at a high level."

Jones played most of the last three quarters in last week's 35-13 victory over Tennessee, and he's 20 of 32 for 237 yards, with 1 touchdown and 1 interception this season.

The Crimson Tide have employed great receivers like Julio Jones and Amari Cooper into the game plans throughout the Saban years, but never have they collected talent at wideout like in recent seasons for Hurts, Tagavailoa and now Jones, to complement.

The current quartet of Jerry Jeudy, DeVonta Smith, Henry Ruggs III and Jaylen Waddle might just be the most dangerous set in the nation, and the best group Alabama has ever assembled.

"They've made that decision to use them and they've been successful that way. It gives fans something to cheer about. Everybody wants to see you throw the football and score all those touchdowns. They've been able to do that and it's just what they do."

Waddle leads the Tide with 14 plays of 20-plus yards. All four of the wideouts have at least 10 such plays and the group has combined for 48 of them, including 13 of 40 or more yards.

"I think this generation, just playing against this Bama offense, this is the most explosive I've ever seen them," Arkansas senior De'Jon Harris said.

"I don't want to downplay any other recovering corps that we've played, but this is definitely like the most talented group that I've seen," junior Grant Morgan added.

"They're very explosive and they can do anything," added sophomore cornerback Montaric Brown.

The apex for Alabama's attack against Arkansas came last season when Tagavailoa passed for 341 yards and 4 touchdowns.

Bama scored on the first play of the game, a 76-yard catch and run by tight end Irv Smith, and posted touchdowns on six of seven first half possessions before running out the second quarter clock. The Tide notched three touchdowns and a field goal on its second-half series before taking a knee to end the game.

Jones will have a full week to work on the offensive plan.

"They're not gonna completely change their scheme," Chavis predicted. "They're gonna let him do what he does well.

"He's got a good arm and he can move around a little bit and get away from some pressures. He's the next guy up at Alabama because he's a very fine football player."

The Tide might lean more heavily on a run game led by 6-2, 230-pound Najee Harris, who has 556 rushing yards and 3 touchdowns and averages 5.9 yards per carry.

"If I was them I'd run it," Morgan said. "They have a real good running back, really good offensive linemen. They're gonna do whatever works for Alabama.

"Like [Chavis] asked us today, if you were the offensive coordinator what would you want to do? And if you watched our film, you say run it. Like Kentucky did and like Auburn did."

The Arkansas defense has taken more than 100 reps against running plays in the last two games combined.

Kentucky ran 54 times for 330 yards and 2 touchdowns two weeks ago, while Auburn had 51 run plays for 298 yards and three touchdowns last week. The combined stats are 105 carries for 628 yards, an average of 5.98 yards per carry.