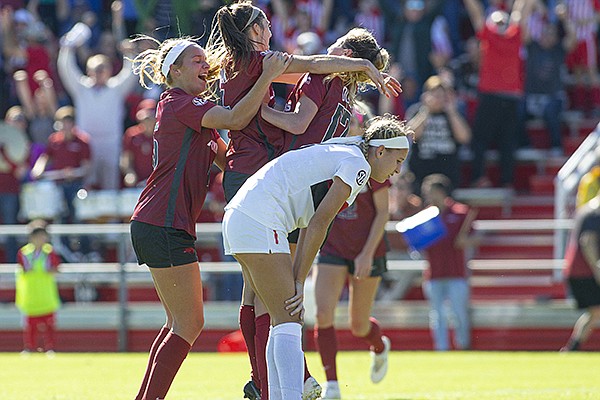 Arkansas' Taylor Malham (middle) celebrates with teammates after scoring a goal in the 85th minute of the Razorbacks' game against Georgia on Sunday, Oct. 27, 2019, in Fayetteville.

FAYETTEVILLE — The No. 6 Arkansas soccer team rallied to tie Georgia 1-1 on Sunday at Razorback Field.

The result kept the Razorbacks unbeaten in their past six games and alone atop the standings in the SEC. The Bulldogs extended their unbeaten streak to four games.

Arkansas (13-2-2, 7-1-1 SEC) had several chances to win, but just missed on a number of chances inside the 18-yard box in the closing minutes of regulation and in overtime.

The Razorbacks trailed 1-0 late, but tied the game when Taylor Malham redirected a corner kick from Marissa Kinsey in the 85th minute. It was Malham’s seventh goal of the season.

“It was a great goal. She just stayed with it,” Arkansas coach Colby Hale said. “We said at halftime that’s probably how a goal is going to be scored with so many numbers back. As the game went on there were a million people in the box.”

Georgia goalkeeper Emory Wegener finished with seven saves, six of which came after the Bulldogs led 1-0 at halftime. Arkansas had 15 shots over the final 40 minutes of regulation and two 10-minute overtime periods.

The Razorbacks kept Wegener especially busy in the final 16 minutes of regulation, applying waves of pressure against the Bulldogs’ back line. Among Arkansas’ near misses was a free kick by goalkeeper Katie Lund from about 50 yards away, just inside midfield, that Wegner leaped to deflect over the top of the net.

“I got lucky and made the save,” Wegener said.

In the minutes leading up to Malham’s equalizer, Arkansas' Tori Cannata missed wide on a header in front of the net, and Reagan Cox had a shot go wide of the goal. Minutes following Malham’s goal, Parker Goins had a shot hit the crossbar and a Malham follow was saved by Wegener.

“You could tell we wanted the result bad,” Hale said.

The Razorbacks kept up the pressure in both overtime periods. Arkansas advanced on several accurate passes midway through the first overtime, but a cross to a cutting Stefani Doyle was intercepted in front of the net. In the second overtime, Goins’ roller from 17 yards was saved by Wegener on a diving stop to her left.

“We had a bunch (of opportunities),” Hale said. “Sometimes you just need that one to go in. It didn’t, but we’ll learn from it.”

Georgia (7-6-4, 3-3-3) took a 1-0 lead when Chloe Chapman scored her first goal of the season in the 25th minute. The Bulldogs were agrressive for much of the first half and benefitted from some footing issues by the Razorbacks on the saturated field.

“We did a good job of...playing the game on their half of the field,” Georgia coach Billy Lesesne said. “In the second half I thought the pressure Arkansas applied was at a really high level and we couldn’t dig it out and keep it on their end as well as we did in the first half.

“Not many teams come in here and do well...so to do so well defensively was a really good statement for our team today.”

Hale said the Razorbacks had a “pretty bad” first half.

“I think the lesson is going to be that you have to start strong," Hail said

Arkansas would have clinched a share of the SEC overall championship with a victory Sunday, but was not hurt by the tie. With 22 points, the Razorbacks have a one-point lead over No. 8 South Carolina atop the standings and can win the league title with a victory in the regular-season finale at Tennessee on Thursday.

South Carolina tied No. 20 Florida 1-1 on the road Sunday. The Gamecocks would have overtaken the Razorbacks in the standings with a victory in their game.