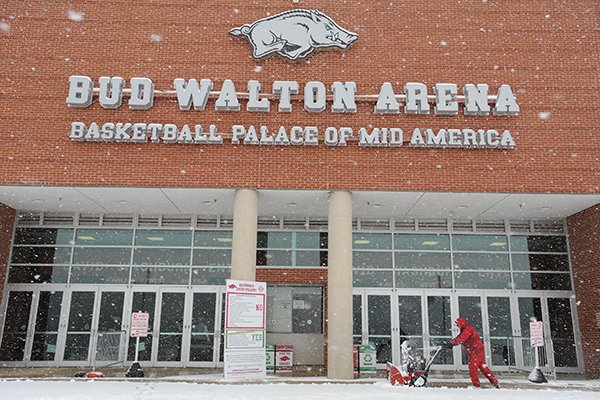 Workers clear snow from the west entrance of Bud Walton Arena on the university campus as snow falls Sunday, Feb. 2, 2014, in Fayetteville.

FAYETTEVILLE — Walk-through metal detectors will be in place this season for University of Arkansas home basketball games at Bud Walton Arena.

Detectors will not be used for the women's home opener against New Orleans on Nov. 8, when approximately 5,600 elementary students will be in attendance for a midday game. A UA spokesperson said increased security measures will be in place that day.

A release states metal detectors will be added at Baum-Walker Stadium and Donald W. Reynolds Razorback Stadium in time for the 2020 baseball and football seasons. Metal detectors are already in place at War Memorial Stadium in Little Rock and Simmons Bank Arena in North Little Rock, where the Razorbacks’ football and men’s basketball teams play once each year.

“As we enhance our security measures at our venues, we have also made efforts to expedite entry and minimize the inconvenience for our guests,” UA athletics director Hunter Yurachek said in a statement. “Multiple metal detectors will be used at all primary gates and, unlike many other locations where metal detectors are employed, the metal detectors in use at Bud Walton Arena will enable fans to keep many items, like cell phones, keys and wallets, in their pockets or carry them in their hands during the screening process.”

In addition to cell phones, keys and wallets, fans will not be required to remove shoes, belts, coins, watches, jewelry, coats or hats while passing through the metal detectors. Fans will be told to pass through the detectors before scanning their tickets.

The detectors will be located outside the arena’s north, east and west entrances, and inside the arena at the south entrance. At each entrance there will be a detector designed to accommodate wheelchairs.

Arena doors will open 90 minutes prior to each men’s basketball game and 60 minutes prior to women’s games. The UA release encouraged fans to arrive at least 15 minutes earlier than normal to compensate for the added time to enter the arena.