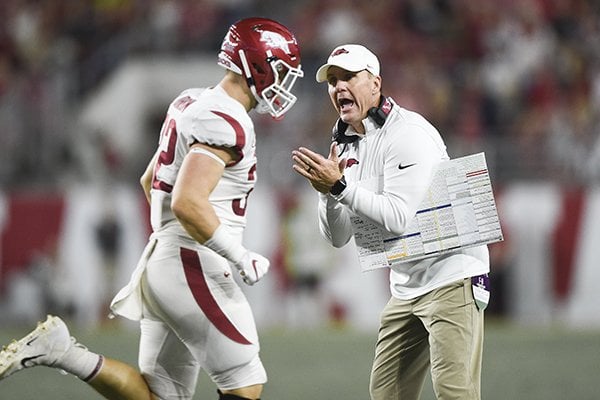 Arkansas coach Chad Morris claps as fullback Hayden Johnson (32) runs off the field during a game against Alabama on Saturday, Oct. 26, 2019, in Tuscaloosa, Ala.

FAYETTEVILLE -- University of Arkansas Coach Chad Morris said the Razorbacks are bringing a fresh focus into the final month of the season.

The Razorbacks (2-6, 0-5 SEC) enter their homecoming week against Mississippi State (3-5, 1-4) riding a five-game losing streak. The 30th meeting between the SEC West rivals will take place at 3 p.m. on Saturday at Reynolds Razorback Stadium.

"As you move forward, you talk about breaking this thing down into the season of November now," Morris said. "A November to remember. An opportunity for these guys that there's still a lot ahead of them. As I mentioned last night, we've got four games remaining, and three of the four are in front of our home crowd."

The Razorbacks are coming off a 48-7 loss against No. 1 Alabama. Arkansas squandered moderate early offensive success -- driving into Alabama territory on its first two series, and to its own 46 on its third -- with a string of four first-half turnovers that the Crimson Tide turned into 24 points.

"I don't think we played very good, to be honest with you," offensive coordinator Joe Craddock said. "We put our defense on a short field several times. We can't do that. We talked about that all week."

Defensive coordinator John Chavis said he was making no excuses for the disadvantaged field position his unit inherited. Alabama had touchdown drives of 14, 48 and 48 yards after two turnovers and a punt in the first half.

"We take a lot of pride here in pressure defense," Chavis said. "Through the years, we've been the guys that's had the takeaways. If we get in those situations ... we've got to take the ball back, and that's the way I look at it.

"I'm not going to come in here and say, 'Hey, they scored 48 points or whatever it was because of short fields.' We've got to stop them. That's what we're supposed to do, and that's what good defenses are going to do."

The Arkansas offense will be looking to shore up several areas in the last four games. Among them, an offensive front beset by injuries, inconsistent quarterback play and an inability to get the ball to their dynamic playmakers at the receiver position.

Senior Colton Jackson announced his retirement Monday due to injuries after talking to Morris. Jackson has been in concussion protocol twice this season, entered the season with a foot injury and suffered another back ailment two weeks ago.

Morris and Craddock are entering a third successive week without announcing who will start at quarterback.

Senior Ben Hicks and junior Nick Starkel were listed as co-first teamers in that order in Monday's game notes, with redshirt freshman John Stephen Jones behind them.

Those three have spent much of the season performing better as the backup. It was Jones' turn last week, when he came off the bench to settle down a unit undone by three Starkel interceptions, the last of which turned into an 84-yard pick-six for Alabama's Trevon Diggs with seven seconds remaining before halftime.

"John Stephen did some good things moving the ball in the zone read and things like that," Craddock said. "So he did a good job there coming in and putting us in the end zone."

The Razorbacks' lone score came at the end of an 85-yard drive, their longest of the season, on Jones' 8-yard pass to tight end Cheyenne O'Grady.

While O'Grady and running backs Rakeem Boyd and Devwah Whaley combined for 10 receptions against Alabama, the wide receivers notched one combined. Treylon Burks had a 15-yard catch on the first play of the Razorbacks' second possession, and that was it for the receivers despite being targeted several other times.

Starkel overthrew a wide-open Mike Woods running down a seam behind a defender midway through the second quarter, and his second interception was on a deep ball intended for Trey Knox.

Alabama also batted down three Starkel passes at or near the line of scrimmage.

"I thought they did a great job when they didn't feel like they could get a rush on us -- or they did and we were going to get the ball out quick -- that they were just going to stop, redirect and get up and try to bat a ball down and try to get in our passing lanes," Morris said.

Craddock mentioned he'd never been involved in a game in which the wideouts combined for one catch.

"Yeah, I was very surprised," Craddock said. "Obviously, we had some batted balls. We tried to get Treylon a ball over the middle and the ball got batted down. We had a couple of others that I thought we could have done a better job.

"I've never been a part of that. We had Mike Woods open on a seam ball for a touchdown and we missed him. But yeah, that was something that was new to us. We knew going into the game that their DBs were pretty good. And credit to them. They did a good job of locking us down for the most part on the outside.

"On the inside, I thought we did a good job of getting open. We just got some balls batted down and overthrew Mike. But I've never been a part of a game like that."