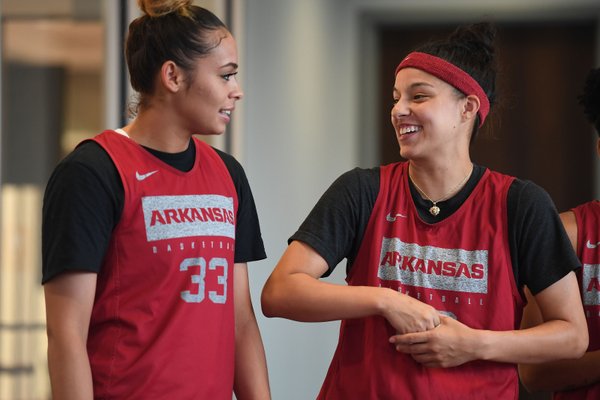 Guards Chelsea Dungee (LEFT) and Amber Ramirez wait their turn to talk to the media Wednesday Oct. 9, 2019 at the Arkansas Basketball Performance Center.

"We're honored by it and definitely not going to take it for granted," Arkansas coach Mike Neighbors told the AP.

"My grandpa used to say things are different when the deer gets the gun," Neighbors said of being ranked. "There's a different approach for us with teams having motivation against us. It requires a different level of preparation and understanding and that's really new for us."

Arkansas returns four starters and six of its top seven scorers from its team that finished 22-15 last season and advanced to the third round of the WNIT. The Razorbacks also added point guard Amber Ramirez, a former McDonald’s All-American in high school who redshirted at Arkansas last season after transferring from TCU.

The Razorbacks are scheduled to play Oklahoma City in an exhibition game tonight and open the season on Nov. 8 with a game against New Orleans.

Arkansas has been predicted to finish fifth in the SEC this season by media and coaches. The Razorbacks are the lowest of five ranked SEC teams, behind Texas A&M (6), South Carolina (8), Mississippi State (10) and Kentucky (13).