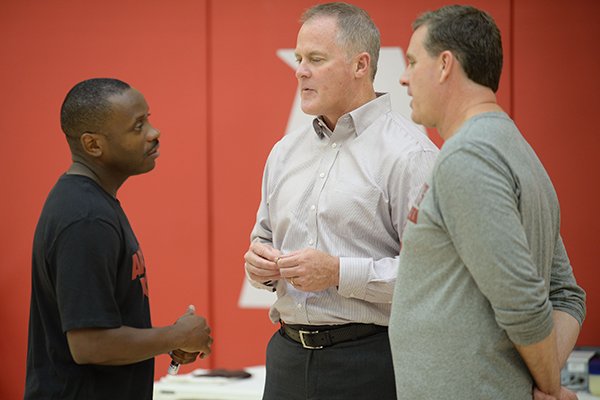 FAYETTEVILLE -- Earl Boykins is on Eric Musselman's team again, this time at the University of Arkansas.

As an NBA player, Boykins first met Musselman during the 1999-2000 season. Musselman was an assistant coach for Orlando, and Boykins played just one game for the Magic, but he made an impression.

When Musselman became an NBA head coach with Golden State in 2002, he brought in Boykins as a free agent.

Boykins played in 68 games with Musselman's Warriors and averaged 8.8 points and 3.3 assists in 19.4 minutes per game off the bench. He specialized in closing games in the fourth quarter.

After the season, the 5-5 point guard -- who had bounced around the NBA on short-term contracts with five teams in four years -- signed a five-year, $13.7 million deal with Denver.

"When you're 5-5, it's easy for people to tell you, 'No,' " Boykins said. "It takes a confident person to allow a player of my stature to not only play, but close games like I did at Golden State.

"Ninety percent of the coaches in the NBA wouldn't even give me the ball. I never would have gotten to play in the NBA as long as I did if Eric hadn't given me the opportunity."

Now Musselman, in his first season as Arkansas' coach, is giving Boykins the opportunity to be on a college staff for the first time.

Boykins, who since retiring from the NBA in 2012 had been the head coach at Douglas County (Colo.) High School and run the Boykins Basketball Academy in Denver, was hired as the Razorbacks' director of student-athlete development.

"For me, it's a chance to go from coaching in high school to being on the staff with an SEC team," Boykins said. "Plus, I get to work with someone I respect as a person and who has a wealth of basketball knowledge."

Musselman said Boykins adds a lot to the Arkansas staff with his extensive NBA playing experience. He also played professionally in Italy.

"Earl sees things through a lens I don't see, which is awesome," Musselman said. "He sees the game through a different lens than all of our assistant coaches, so when we're in staff meetings, Earl gives us a whole different thought process.

"He's always looking at a positive on each player as we go through our roster and ways to improve guys individually as well as collectively."

Boykins isn't allowed to coach in practice, but he can watch and pass along suggestions to the coaches and graduate assistants. He also talks to the players on a variety of topics.

"I think my first responsibility is to help these guys in the classroom," said Boykins, who graduated from Eastern Michigan in 1998 with a communications degree. "You have to take the academic side first, because if you don't have that aspect down, then it can be a struggle on the court.

"Then as far as the basketball side, because I played for Eric Musselman, I know how it actually feels to have him yelling at you in practice, and the best way to react to that. I can tell a player, 'Look, if you do these things, it will stop him from yelling at you -- or at least yelling at you as much.' I know what he's looking for from you as a player at all times. That's something I do share with guys on a daily basis."

Darrell Walker, coach of the University of Arkansas at Little Rock, coached Boykins for several games in the CBA during the 1999-2000 season with the Rockford (Ill.) Lightning.

Before the season ended, both were in the NBA. Walker went to the Washington Wizards as their coach, and Boykins signed with Orlando for a brief stint, then went to the Cleveland Cavaliers.

"Earl was gritty, tough," Walker said. "God gave him a gift to really be able to score the basketball. I put the ball in his hands, and he had no fear of taking the big shot.

"He was a special little player. He could finish at the basket at his size because he was so strong, and he could shoot the ball with range. Even though he was small, I knew he had a big heart. He had some swagger and confidence about him.

"At that size and you're trying to make it in the NBA, the hell with what anybody else says. You have to believe in yourself."

"Earl will be able to soak up all the knowledge he can from Eric and his staff, and he's going to help the players understand what it takes to get to the next level, whether it's in the NBA, the G League, overseas," Walker said. "He's had a lot of life experiences. He's been where they're trying to get to, so he's somebody they can talk to about that."

Despite Boykins' impressive college career, he wasn't selected in the 1998 NBA Draft.

"I was very upset," he said. "I remember my dad telling me, 'The only thing that happened tonight is you didn't hear your name called on TV. That doesn't mean you won't play in the NBA.' Instantly, my attitude changed."

After Boykins' first CBA stint with Rockford, he signed his first NBA free agent contract with the New Jersey Nets in 1999. His coach with the Nets was John Calipari, who is now at Kentucky.

"I absolutely enjoyed coaching Earl," Calipari said at SEC media days. "Later I had another kid, [5-8] Tyler Ulis. He had the same kind of fight as Earl. You could switch in a pick and roll, and Earl would get stuck on a big guy and fight like crazy, just like Tyler did in later years.

"It gave me the confidence to play Tyler, because I had coached Earl in the NBA and he did fine."

Musselman said Boykins had a long NBA career because of his professional attitude.

"It wasn't just basketball," Musselman said. "NBA coaches, NBA management, NBA players liked to have him on their roster because of his professionalism, and he was a great teammate and leader on all those teams he played with. His reputation in the basketball world is phenomenal."